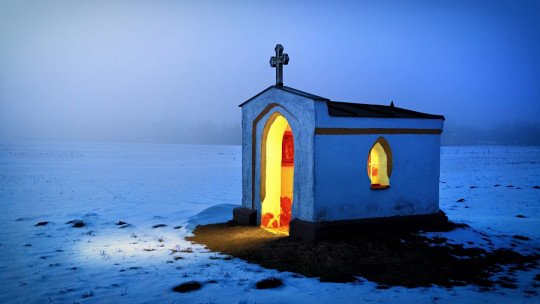 Christianity is the largest monotheistic religion with the largest number of followers in the world. However, it is not a single homogeneous belief system.

There are several main branches of Christianity . Let’s see what they are.

The 4 main branches of Christianity

Christianity is based on the life and teachings of Jesus of Nazareth. They believe that he is the son of God and the messiah who was crucified and rose from the dead to give eternal life to those who believe in him.

Being such an extensive and ancient religion, many Christian communities have branched out for different reasons giving way to the creation of other religious variants.

It is one of the most important branches of Christianity, with over 900 million followers worldwide. It was born in the sixteenth century when Martin Luther , considered today as the father of Protestantism, as it is he who officially dissociated himself from the Catholic Church in 1517.

The Protestants only accept two sacraments: baptism and the Eucharist . They do not know the authority of the pope because they only recognize Christ as the leader of the church. For them, the Bible is the only text of God’s teachings.

They oppose the sale of indulgences, so they believe that salvation depends on people’s faith and not on the works they do. They do not believe in purgatory, in the sacrifice of the Mass or in the intercession of the deceased saints. They do not allow the use of religious figures or images.

Because of its extension in the world and the number of followers, it is considered one of the most influential branches of Christianity.

The Orthodox churches separated from the Catholic Church in the 11th century , although they maintain many similarities with it. It constitutes a community of independent churches, each governed by its own bishop. This branch of Christianity arises from the definitive separation of the Christian Church by finding differences and not accepting the modifications that the Roman Church proposed. Hence the name “orthodox” which means “righteous belief”, since they maintain the original creed of the Christian Church as the source of the Holy Spirit, deny the existence of purgatory, reject the immaculate conception of the Virgin Mary and ignore the concept of original sin that the Roman Church adopted.

The countries with a greater presence of Orthodox Christianity are Ukraine, Serbia, Bulgaria, Greece and Russia, among other nations.

It is the branch of Christianity formed by the Roman Catholic Church in Western Europe. It has its center in the Vatican that recognizes the Pope as its supreme authority . Of the existing branches of Christianity, this is the one with the most followers, with 1214 million faithful.

Besides the adoration of Jesus, it is characterized by the importance it gives to the Virgin Mary and the saints . The Catholic Church argues that it is the only church founded by Christ that was entrusted to the apostle Peter, and therefore it is claimed to be a “sign and instrument of intimate union with God”.

The doctrine of the Catholic Church has been based on doctrines and concepts that are not present in the Bible and that are transmitted through the apostolic tradition , this is one of the main reasons for the separation with orthodox and protestants.

Its main rites and sacraments are baptism, communion, the Eucharist and marriage.

It is founded and practiced in England and some places in the United States. It is a broad fraternity of 40 autonomous provinces of mutual dependence that defines itself as the faith, practice and spirit of the member churches of the well-known “Anglican Communion” which are the churches that are in communion with the Archbishop of Canterbury . It is one of the most numerous Christian communions in the world, with 98 million members.

They consider themselves to be part of the Christian Church: One, Holy, Catholic and Apostolic, and Reformed. For many, it represents a form of non-papal Catholicism or a form of Protestantism without such founding figures as Martin Luther or John Calvin.

Anglican Christianity has deep roots in the centuries before the 16th century. The core of Anglican faith is found in the Bible, the 39 articles of Christian faith and the book of common prayer, which summarizes the teaching of the first five centuries and rejects the later evolution of the Catholic Church.

They reject the worship of images and all their bishops have the same rank sharing the leadership of the Church. They accept the Bible but freedom of interpretation is given. The clergy can marry.