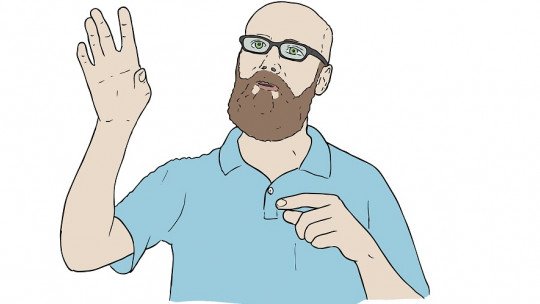 There are many myths and misconceptions about non-verbal language .

Gestural communication and everything we transmit with our physical expression has a cardinal importance when it comes to communicating with other human beings. In fact, the experts state that up to 80% of what we transmit is done through non-verbal means, and only 20% has to do with our words . Surprising, isn’t it?

Despite this, its importance is unquestionable, since for many years a large part of the communication of the human species was based exclusively on gestures, expressions and grunts .

Non-verbal language: can it be improved?

Through this limited form of information exchange, the human being must be able to understand whether someone had friendly intentions or not, whether there was something to worry about immediately, or whether he had any possibility of mating with other members of the tribe.

The increasing proliferation of scientific studies has led to an understanding of the role of non-verbal language in greater detail, but in some cases it has also contributed to an overly extreme view of its importance.

The reality is that in most situations you cannot draw conclusions from a single gesture separately . They must be integrated within a context and a set of signs in order to give real meaning to that expression.

The science of body language still has many riddles to unravel, but you can start with these five concepts that will allow you to improve your social skills and mastery of non-verbal communication .

There is a physiological mechanism, called proprioception, that establishes a pathway of double meaning between your emotions and your body language . And that has enormous advantages for those who know how to use it to their advantage.

When you feel an emotion or are overcome by a feeling, your neurons send an order to your muscles to adopt a certain posture. If you feel insecure, for example, the consequence is that you will end up crossing your arms to establish a barrier.

However, some studies have shown that there is also the opposite route. If you consciously adopt a posture of insecurity, your mind will begin to experience the corresponding emotion. Your brain understands that if it is showing that gesture it is because it should feel that way.

The good news is that it is possible to use this two-way street to create positive states . If you adopt a confident posture, such as head high and shoulders up, you will start to feel more confident and relaxed.

2. The further away from the brain, the less control

Several investigations have concluded that the arms, hands and torso are the most easily controlled parts of the body in a conscious way. That is why many people are able to pretend through their non-verbal language to feel some emotions, when in fact they are experiencing others.

But it also seems that the further away from the central nervous system a body part is, the less conscious control we can exercise over it. It is probably a question of inattention rather than physical distance, but in any case we tend to be less aware of the position of our legs than of our arms.

It’s a good idea to pay attention not only to the body language of your upper torso but also to your partner’s feet because they will provide you with valuable information. Our feet usually point towards what interests us, whether a person or an escape route, and often go completely unnoticed.

3. The face is the mirror of the soul

The expressions on the face are also usually quite representative of someone’s state of mind. In fact, there are even theories that link facial features with personality, such as Morphopsychology.

For many years of evolution we have had to be able to communicate emotions accurately in order to survive as a species. In that context and due to the large amount of facial muscles in existence, the face has become the most reliable mirror of the soul.

Although there are many nuances, there are 4 to 6 basic emotions that our facial microexpressions are capable of communicating: joy, fear, anger, sadness, disgust and surprise. Each one involves certain facial muscles and they must be integrated within a global context that includes the rest of the body language and oral communication.

It is possible to falsify to some extent the facial microexpressions to camouflage feelings, but it is virtually impossible to control all the muscles involved consciously . That’s why there are always clues like the lack of lifting of the cheeks and eyes in the false expression of joy:

There is scientific evidence that supports the fact that when two people like each other or spend a lot of time together, they tend to unconsciously adopt the same body language . Much of the responsibility lies with the emotional contagion through the mirror neurons.

Imitating someone else’s body language is a simple and easy way to start building trust, but it is best to do it carefully so that it is not obvious.

To achieve this you must be selective in what you imitate : do not copy gestures that would not be natural for you, do not imitate them immediately after your interlocutor makes them, and vary their amplitude and intensity. It is also a good idea to avoid reproducing negative expressions so as not to increase their contagiousness, although this will depend on each specific situation.

While it may seem manipulative, it is not when the target is honest. Many people with great social skills have unconsciously incorporated it to get their interlocutor to relax and open up to deeper conversations.

Another way to get a lot of information out of non-verbal language is through the type of contact you have with yourself.

When someone touches their eyes, ears or mouth it may be an unconscious attempt to block something they don’t like . To avoid misunderstandings (like an itchy eye) you should also take into account other signs that confirm this conclusion.

On the other hand, touching oneself by joining hands or rubbing arms may indicate a need for support, perhaps as a legacy of the comfort in the form of physical contact that our parents offered us in childhood. This signal can help you sense that someone is feeling uncomfortable and needs to feel supported.