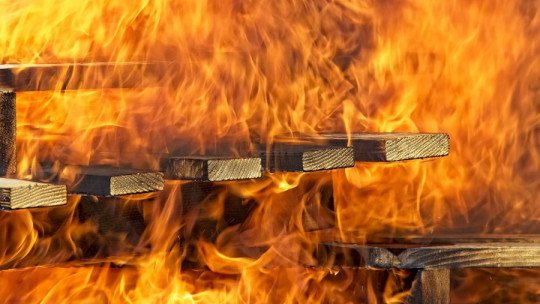 From the remotest antiquity, fire has always been as much an object of veneration as of fear and dread. This double vision of flames comes from the fact that we are aware that fire is an element with the capacity to destroy, but also that it has made it easier for us to survive by allowing us to light up, warm up, cook our food and defend ourselves from animals and enemies.

But not all fires are the same, but there are different classifications regarding the types of fire we can encounter . It is about this diversity of typologies that we are going to talk throughout this article.

Fire: what is it and how is it generated?

Before going into detail about the types of fire that exist, it may be useful to stop and reflect on what fire is and how it is generated. Fire, more than an element per se, is the manifestation of a process or a chemical reaction of combustion that is generated violently and more or less rapidly.

It is an oxidation process at an exothermic level in which a material oxidizes at such a speed that it even causes the transmission of light and heat energy, something that allows the appearance of the flames as a product of burning gas.

For a flame to form, a number of factors must exist and be present without which combustion could not occur. Firstly, a fuel or material with the capacity to ignite under certain circumstances is needed, which will act as a reducing agent.

In addition, another essential requirement is an oxidizer or material/element capable of causing combustion (the most common is oxygen). In this sense, the oxidant will play the role of an oxidizing agent

The third element, of great relevance, is the presence of some type of energy that allows combustion to start, such as the heat energy generated by friction. Finally, it is necessary for the chain reaction to take place in order to be maintained, or else the fire would be extinguished. Flames and fire can be of different tones and colours and have different behaviours depending on which elements are serving as comburant and fuel.

Classification of fire types according to fuel type

One of the most common ways, and in fact the most accepted and official worldwide, of classifying different types of fire can be found in the one that takes as a criterion of differentiation the type of fuel that participates in the reaction. In this sense, it is divided into five main classes, although sometimes it has been considered a sixth.

A class A fire is any combustion reaction that originates from a solid, and often organic, fuel . This is the type of fire that we carry out in bonfires or those caused in forests or in living tissues. They can also arise from the combustion of plastics. They can be extinguished with water, either by jet or spray, although other methods such as dry powder or carbon dioxide can also be used.

Class B fires are types of fire which arise from the combustion of liquid materials with a flammable capacity, or of solids with the capacity to liquefy. This is the type of fire that is produced by the combustion of alcohol, gasoline, wax or paint, among others. In this sense, the fire of candles or old lanterns would belong to this group. Its extinction requires dry powder , although sprayed water or CO2 can also be used.

Class C fires are considered to be all types of fire that are the product of the combustion of gases at high temperature, such as those used in electrical appliances or in the kitchen. Thus, the combustion of methane or natural gas would produce this type of fire, which tends to appear more quickly than in the case of the previous ones . Reactions of this type require dry powder to be able to extinguish them.

Class D, as far as fire types are concerned, refers to those combustion reactions where the fuel is some kind of flammable metal or metal dust. Examples are those caused by magnesium . They should not be extinguished with water as the reaction is extremely virulent, but special powdered extinguishers should be used.

This last type of fire is somewhat special, as it refers to a fire started by a fuel in the form of oil or fat, which is used in cooking equipment. In Europe it was called class F fire, and in English-speaking territories they are known as class K (kitchen) fires.

Although technically it is not usually considered as a type of fire apart from the previous ones but each case would be included in the corresponding type of fuel, sometimes we have talked about the E class fire type. This classification would mainly include flames produced by alterations linked to elements that function or through which electricity circulates. The reason for not considering it as a real class is the fact that what burns are basically determined components that belong to previous classes . Putting them out requires carbon dioxide fire extinguishers, never water.