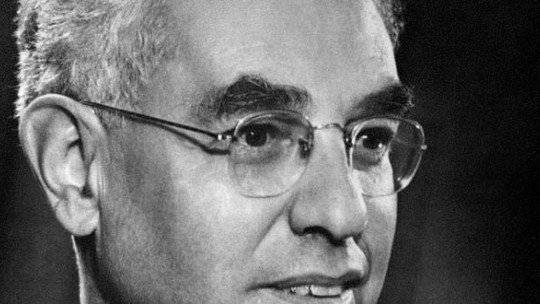 Alexander Luria (1902 – 1977), whose official name is transcribed as Aleksandr Románovich Lúriya, was the pioneer of modern neuropsychology.

Born in Kazan, Russia, before the Russian Revolution, he developed different studies and investigations that have been the basis for this sub-discipline within psychology, in which the brain is the originator of behavior.

In this article we have proposed to make a compilation of phrases by Alexander Luria that will allow us to know better his contributions and theories.

Born into a family of Jewish origin, Luria spoke fluent German, French, English and Russian. A disciple of Lev Vygotsky and a personal friend of Sigmund Freud, Alexander Luria shared his scientific contributions in more than 350 publications.

Without further ado, we are going to look at his famous quotes along with a brief contextualization of each of them.

1. It is difficult to know the reason for my choice of psychology as the field of my immediate professional activity.

Alexander Luria’s academic journey is a bit strange. Contextualizing, it must be understood that the Russian Revolution happened just at a decisive moment of his formation, at the tender age of 7. He entered the university at the age of 15 to study psychology.

The first sentence corresponds to his autobiographical book “Looking back”, written in 1979. It is an opinion about his genuine interest in mental mechanisms.

2. The responsibilities we endured and the opportunity to study a large number of brain-injured patients were impressive. Thus, the years of disaster provided us with the greatest opportunity to advance science.

In this sentence, Alexander Luria talks about neuropsychology in people with brain injuries. The branch of neuropsychology does not have as a means to provoke certain lesions in order to evaluate the effects, but simply studies existing cases of people who have undergone certain reparative surgeries.

3. In a certain village in Siberia all bears are white. Your neighbour went to that village and saw a bear. What colour was the bear?

The syllogism of phrase number three became especially popular in his time. Luria described this logical fallacy on one of her trips to visit an indigenous village in Central Asia. He wanted to find out if there was a kind of logical reasoning that was used in all cultures and societies. Interestingly, the most common response among the members of that village was: “I don’t know, why don’t you ask my neighbor?

Although Luria is widely known for his research and discoveries in patients with acquired brain damage and for the location in the brain of certain mental functions, it is also important to know that he was one of the pioneers in designing lie detectors. And although he was a great student of psychophysiology, he also investigated psychoanalysis and human emotions in search of methods of “complementary motor responses”.

4. Talking is a miracle.

A sentence by Alexander Luria in which he shows us his deep interest and admiration for mental processes. Luria conceives the brain as a holistic entity and, like his professor Lev Vygotsky, I try to find out the brain functions that, in association with others, form the fundamental basis of thought. This approach clashes head-on with the postulates of other prestigious academics of the time, such as Karl Wernicke or Paul Broca, who were followers of the idea that certain specific regions of the brain corresponded to certain motor and cognitive functions.

This controversy between supporters of localizationism and anti-localizationism remained for much of the 19th and 20th centuries. Currently, most academics agree that there is a middle ground between both positions: our brain functions as a system of interrelationships, although it is also possible to detect some regions that are responsible for specific mental processes (as an example, Broca’s area is especially linked to the production of language).

Alexander Luria himself proposed a theory of organization on three levels of the brain: primary, secondary and tertiary. According to his approach, each brain area, through a complex network of neural connections, is responsible for specific mental functions:

5. Our mission is not to “locate” the higher psychological processes of man in limited areas of the cortex, but to find out, through careful analysis, which groups of concerted brain zones are responsible for the execution of complex mental activity.

Always following Luria, these three levels constitute a functional system that are interrelated. Higher type functions involve different brain regions and are carried out in a coordinated manner.

The Russian neuropsychologist was right when he commented, in one of his books, that research into mental and cerebral processes is still very recent, and he welcomed the many insights that were being gained in his time. Alexander Luria’s previous sentence is a good example of this.

7. In order to progress from the establishment of the symptom (loss of a given function) to the location of the corresponding mental activity, there is still a long way to go.

Alexander Luria’s work has been key to the scientific community’s deepening research into the neuropsychological basis of human consciousness. His important discoveries in the field of neuropsychology have resulted in a scientific field of special interest for mental health professionals.