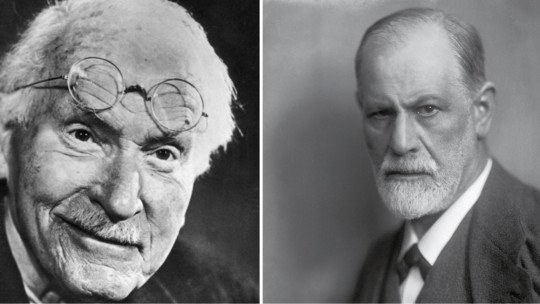 Sigmund Freud and Carl Jung are the two authors who have had the greatest influence on the development of the psychodynamic model; in fact, the disagreements between the two authors shaped the evolution of this paradigm during the 20th century. In this article we will analyze 8 differences between Freud’s psychoanalysis and Jung’s analytical psychology .

The famous Sigmund Freud (1856-1939) founded the discipline to which he gave the name of “psychoanalysis”. This author highlighted the importance of unconscious processes and development during childhood in determining behaviour, as well as the analysis of unintentional acts (such as dreams) to bring this type of aspect to consciousness.

One of his most outstanding students was Carl Jung (1875-1961). Although Freud believed that he was going to be his heir, Jung explicitly showed his opposition to some of the key aspects of psychoanalytic theory , particularly its excessive emphasis on sexuality and the lack of interest in individual differences and their influence on treatment.

While it is undeniable that psychoanalysis would not have existed without Freud, Jung’s influence on subsequent generations has been enormous; not only has his criticism of the master been supported by a large number of psychodynamic therapists, but his model of therapy is probably more widely used today than that of Freudian psychoanalysis.

The differences between Freud and Jung

The differences between Freud’s theory and Jung’s are multiple , and of course this also applies to the therapeutic methods that each promoted. Below we will review some of the most remarkable ones, which include aspects such as sexuality, the conception of development or the relative influence they give to heredity and environment.

While Freud was of the opinion that the unconscious is specific to each person since it develops according to early experiences, Jung also described a collective unconscious that would be transmitted through genetic inheritance and would be composed of the archetypes, primordial images that all human beings share.

For Jung, the concept of libido did not have a predominantly sexual character, but he used it to refer to any type of psychic energy. In this same line, the psychological processes would not be determined only by sexual impulses but also by other different ones.

However, Freud, who popularized the term, broadened his conception of the libido as he developed his work; thus, although at first he considered that all libidinal energy is in turn sexual, in his last stage he distinguished between the pulses of life, including sexual ones, and those of death.

Freud adopted the concept of “death drive” or “Thanatos” as opposed to life drive or Eros. This is a tendency towards death and self-destruction that contradicts, as well as coexists with, the impulses towards survival, sex and creation. For Jung psychic energy has a non-specific character, so he did not agree with the idea.

4. The development and its stages

The Freudian model of the stages of psychosexual development, which concludes with the reaching of the genital stage at puberty, is extremely well known. Jung, on the other hand, considered that personality development is not circumscribed to childhood but can continue throughout life; in this sense he used the concept “process of individuation”.

According to Freud’s theory, between the ages of 3 and 5, children develop ambivalent feelings (from a combination of life and death drives) towards their same-sex parent. Jung proposed the existence of the Electra complex, which would consist of the rivalry of girls towards their mothers for the love of their fathers , as opposed to the male Oedipus.

Jung’s therapy is largely based on his idea of the collective unconscious, which Freud rejected, and is more adapted to the needs of each individual than Freud’s therapeutic model, the psychoanalytic cure, which in its classical version was burdened by excessive rigidity.

On the other hand, the aim of psychoanalysis is the resolution of deep emotional disorders through the reprocessing of traumatic experiences, and that of Jungian analytical therapy is to redirect the patient towards freedom and spontaneity, as well as to bring together behaviour and self-image in order to reach the “real self”.

Jung felt that Freud’s type of dream analysis was too restrictive and focused too much on sexuality. For this author, dream symbols could not be interpreted by fixed rules, but the external world of the person, as well as the internal world, had to be taken into account.

One of the most peculiar points of conflict between Freud and Jung concerns their conception of the paranormal. Jung developed the theory of synchronicity , according to which there can be causal relationships between apparently unconnected physical and psychological phenomena; Freud considered that this type of ideas did not deserve any kind of consideration.