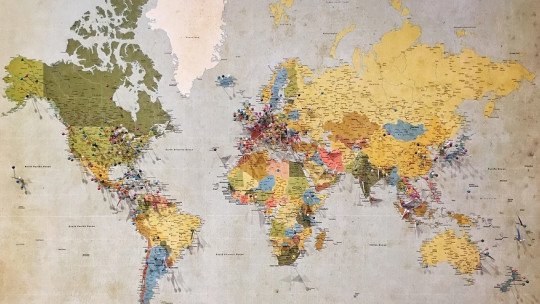 The different types of maps that exist show the complexity of the territorial organization of human beings and the regions we inhabit. These elements related to cartography may adopt the most unsuspected forms, depending on the criteria that have been used to design them.

In the following lines we will see a summary of the different classes of maps going beyond the simple classification that distinguishes between the electronic and physical map.

The main types of maps

Here is a classification of the best known types of maps.

This is one of the types of maps in which no physical elements are represented, but rather only political territories and their limits appear: the borders . In them appear states or regions with a certain sovereignty and self-government. Regardless of the scale of what one wants to represent, be it a region or a supranational organization, the emphasis is placed on the notions of “within” and “without”.

In cases where there is a territorial conflict that creates discrepancies between many parties involved, borders are represented with broken lines, a representation resource that is often also used to mark the borders of a country’s territorial waters.

Of course, as in a political map there are mainly theoretical constructs, in order to make one, it is necessary that there is certain consensus on the limits of each represented political entity .

Being probably one of the most used types of maps, it tries to give the information considered most relevant in most cases regarding the physical elements of a territory, including scale representations of natural or human-made surfaces.

Normally, what you see on one of these maps is what you would see from a zenithal perspective if you adopted a perspective of space by looking at it from a very high point. You try to get a good level of realism.

On the other hand, the size of what you want to represent can vary a lot, going from the entire land surface to the area occupied by a single municipality .

This type of map is characterized by the differences in height (expressed in contour lines) and in general the relief of the earth’s surface . It is also common to use colour patterns to mark the space occupied by different types of geographical features.

This type of map can be similar to the topological one, since it represents natural elements, but in this case it does not put so much emphasis on the relief and the shape of the earth’s surface, and it highlights more the type of minerals that make up the terrain. The latter is often expressed using icons as symbols for the different minerals and natural formations such as springs, volcanoes, special mineral veins, and the like.

Thus, the variations of the territory that appear have to do with the characteristics of the distribution of minerals and the shape of the tectonic plates. In general, the aim is to give an image of both what is on the surface and what is below ground.

In this case, it is a question of highlighting the climatic differences between regions. This is done by coloring in a homogeneous way each zone that shares the same type of climate, sometimes creating overlapping zones (in which several colors are mixed using fine stripe patterns.

Urban maps emphasize elements typical of urbanized areas, that is, constructions made by human beings and communication routes for pedestrians and vehicles, to the point that in many cases nothing more than that appears, except for natural elements such as coasts and rivers.

Thus, normally they represent only the space occupied by a city, district or neighborhood , all to scale. The type of graphic elements used for this are usually simple and minimalist style, in most cases using only polygons.

This is a variation of the urban map in which the layout of a city’s public transport routes is represented almost exclusively, in a very simplified manner. The routes of buses, trains, subway networks, and trams are represented with colored lines, and the stations are marked for the main means of transportation.

This is the support used to show which are or will be the meteorological phenomena in each region, being represented with symbols that represent rain, storm, cloud, etc.
As a consequence, the representation of the territory is usually simple , created only so that each region can be easily recognized without the need to include more non-meteorological information, something that would visually saturate the image.