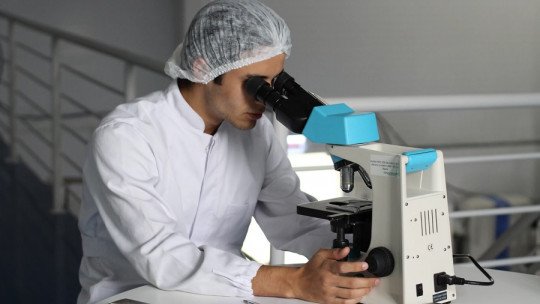 Let’s imagine that we see an apple fall from a tree, and the next day we see someone stumble and fall, and the next day like a child kicks a ball that inevitably ends up on the ground too. Perhaps it suddenly occurs to us that perhaps there is some kind of force pulling and attracting bodies to the ground and that this may explain why different masses tend to be in contact with the surface and to have a certain weight.

Although we are implying the existence of the force of gravity, we cannot consider such thoughts as scientific without further ado. It will be necessary to perform a series of scientifically valid procedures in order to be able to propose its existence as a theory: we will need to use the scientific method. And this method requires a series of steps to be able to elaborate knowledge.

Before starting to talk about the steps involved, first of all it is necessary to briefly establish what the scientific method is . This is understood as the set of methodologies and steps through which science seeks knowledge and the formulation of hypotheses to be experimentally contrasted.

This method is a theoretical process that is applied systematically with a determined order in order to generate valid and objective knowledge, based on empirical observation and the search for knowledge that can be refuted or falsified and that is replicable if the same conditions are met.

The methodology used in the scientific method can be variable, although the hypothetical-deductive procedure is generally used. This method has the advantage that as knowledge advances, it is corrected in such a way that hypotheses and beliefs that are not validated are rejected, using the logic and objectivity of experimentation and replication.

By means of this process, what initially seems to us to be observed will give rise to a series of hypotheses that through research, observation and experimentation will be contrasted, generating an increasingly contrasted knowledge through the controlled replication of events , something that will gradually produce theories and, in the long run and if our hypothesis is maintained in all universally known conditions, laws.

Therefore, the scientific method has to be the basis of any research that wants to be called scientific, since it allows us to obtain a relatively objective knowledge of reality, serving to answer many questions about it and the phenomena that occur in it, generating theories and laws about it and being able to advance on the basis of them both at the level of knowledge and practical application of what has been obtained.

The steps of the scientific method

As we have said, the scientific method is the main procedure that serves as a basis for the construction of scientific knowledge based on evidence, assuming its application the monitoring of a series of steps that allow progress in the understanding of phenomena . The steps followed by the scientific method are the following.

1. Definition of the problem or issue to be investigated

The first step in the scientific method is, of course, the establishment of a problem or issue to be analyzed. It may be a phenomenon that we have observed and of which we intend to obtain knowledge, or the perception that perhaps a relationship with other phenomena may exist.

But does not need to be based on direct observation , but can also be based on a question that arises spontaneously or from an attempt to see if a belief is founded.

2. Assessment and review of previous experiments and history

It is possible that the phenomenon that we have observed or the relationship that has seemed viable to us has already been verified previously by other researchers, being necessary to make a revision of the existing scientific literature on the subject.

It is important in this step to generate hypotheses that can be contrasted , because otherwise they could not go beyond mere beliefs, and as far as possible be made operational. These hypotheses will allow predictions to be made about the behaviour and interaction of the different variables linked to the original question or problem.

4. Search/design and use of a method of empirical falsification

The next step, once the hypothesis is obtained, is to choose and elaborate a methodology or experiment that allows us to check in a systematic and controlled way if our proposed solution is sustainable. In order to do so, we have to take into account that the hypothesis has to be assessed in the most controlled situation possible, taking into account the interaction of variables beyond those intended.

Generally, experimentation is used for this step, since it allows control of the situation and the variables in such a way that it is possible to see if the variables posed have any relation . It is important to bear in mind that we will need large samples or repetition of the experiment so that the result obtained is not merely casual.

It is essential to evaluate the type of variables that we are going to use when checking our hypothesis, as well as the characteristics of the sample or the stimuli to be used and the control of possible strange variables. It will be necessary to make these variables operative, defining the values they may have in order to be able to collect them later.

5. Experimenting or contrasting the hypothesis

The next step, once the experiment or method to be used has been designed, is to carry out the experiment itself. It is important to collect the data in a systematic way, always in the same way so that there are no divergences that invalidate the possible interpretation of the data.

Likewise the experiment is carried out by manipulating the variables , but without actively encouraging the result to favour our hypothesis, otherwise we would be introducing a bias in the subsequent interpretation. In fact, we should aim to refute our hypothesis rather than to confirm it

6. Exhaustive analysis of the results

The experiments carried out will yield a series of results, which will have to be analysed so that we can later assess whether or not they correspond to the hypothesis we were holding.

It is important to note that a single experiment on a single occasion is not enough to determine whether a hypothesis is true or not , but that it must be replicated on numerous occasions or with different subjects.

The possible influence of other factors different from those of our hypothesis should also be assessed, which could interfere with or generate one or another result, regardless of whether the relationship between variables that we imagined is true or not. All of this must be evaluated through statistical methodology in order to assess whether our results are reliable and valid.

Once the results have been analysed, it will be necessary to assess what they imply for our hypothesis, based on whether or not the predictions regarding the behaviour of the variables that should have occurred if our hypothesis were correct are fulfilled. In short, this step aims to provide an answer to the question or problem originally posed . If the data match, the experiment will support the hypothesis, and if not, it will refute it.

However, we must bear in mind that we are only dealing with a positive or negative data of an experiment: it will be necessary to replicate it in order to determine if our hypothesis is fulfilled in other experimental conditions or in other experiments.

On the other hand, it is also necessary to take into account the limitations of the methodology used in the research and the nature of the concepts used in formulating the hypotheses and operationalizing the initial questions.

This is one of the steps of the scientific method in which the discipline known as philosophy of science is most important , since it allows us to know to what extent it is valid or not to extract certain conclusions from the results of the analysis of the data worked. To this end, a reflection is made on the ontological nature of the phenomena studied, and on the possible weaknesses of the methods used from the point of view of epistemology.

8. Reformulation or generation of new hypotheses

Whether or not the hypothesis we were holding has been empirically verified, it can be redefined or, if proven, used as a basis for generating new knowledge and new questions , something that will make us understand the phenomena and problems studied in ever greater depth.

In any case, it should not be forgotten that the refutation of hypotheses also offers knowledge that was not available before the research was carried out, so in these circumstances it is not all bad news.

Is replication part of the process?

In many cases it has been pointed out that scientifically extracted knowledge must be replicated. This does not mean re-analyzing the data obtained to see if another team of researchers reaches the same conclusions from the same information (which is known as replication), but rather gathering data analogous to those collected by other scientists and reaching the same or very similar conclusions .

For example, replicating a study on cognitive biases that predispose us to racism would mean taking another sample of people and finding the same biases in that group, and in the same amount, as in the study we are trying to replicate.

However, whether this is a prerequisite is open to debate. For example, in certain fields of biology, psychology and social sciences it is unrealistic to expect to find a set of data to be analysed that reflects the same as what was reflected in the initial study dataset . This, in principle, makes the problems of replicability greater, so that an investigation that does not lead to the same conclusions as another on the same subject is not in itself sufficient reason to discard a theory or hypothesis.

Similarly, disciplines such as logic or mathematics often do not allow studies to be replicated, since they always start from the same premises, and not from different groups of data but referring to the same phenomenon.