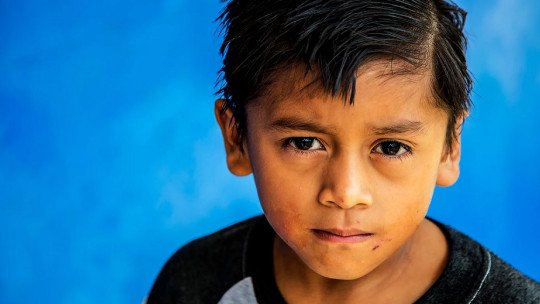 The child’s absorbent mind is one of the key concepts in the pedagogical method developed by the Italian pedagogue and doctor Maria Montessori.

It arises from research where Montessori observed that, between 0 and 6 years of age, children learn instantly, as if their mind were a sponge that unconsciously absorbs information from external stimuli in response to the needs of each stage of development.

Because of its contributions to psychology and pedagogy, the absorbing mind of the child is a concept that has been constantly studied .

Children’s minds according to Montessori

Young children are often fascinated by almost everything around them. It seems that almost any stimulus can get their attention, and no matter how many times it is presented, it can still be as attractive as the first time. In addition, they never seem to get tired and are constantly attracted to novelty and adventure.

According to Montessori, this is because the main characteristic of children is that, unlike adults, they can naturally, involuntarily and progressively absorb the information around them.

Therefore, for Maria Montessori, the fundamental thing in learning during childhood is to allow children to live experiences according to their own rhythms and needs , since it is these experiences that will later become organized perceptions of the world, and they are also the basis for the child’s psychic maturation.

Technically, the absorbing mind is a state of mind that allows the child to assimilate experiences and later analyze and integrate them, which he does unconsciously during the first 3 years, and becomes consciously aware of them progressively towards the next 3 years.

From there, Montessori proposes that the child’s absorbing mind is also the moment in which the child lays the foundations for the development of an identity that is not only psychic, but also social, because it allows him to organize his experiences according to what the environment offers and demands.

For example, without going through formal learning, the child absorbs a language, customs, practices and rules from those around him, which creates an initial sense of belonging and therefore of security.

For Maria Montessori childhood is the crucial stage in the development of human beings , and it is the task of education to encourage and offer the appropriate means for children to build an autonomous identity that is also respectful of those around them.

How does the absorbent mind develop? The sensitive periods

What Maria Montessori also observed is that the mind does not absorb the same thing at all ages , but that there is a series of predispositions that make the child focus his attention on some stimulus based on what is necessary for his growth. That is to say, according to their needs, children concentrate on some things and not on others. They naturally show interest and approach them, which allows them to acquire the necessary knowledge with pleasure and almost without effort.

This interest varies according to the stage of development, so that they are transitory and successive moments that Montessori called “sensitive periods”. Although he divided them by age, he made it clear that they sometimes overlap, and that the length of each period may vary, as well as its intensity. The main periods he described are the following.

Especially during the first two years of life there is an important disposition and interest in classifying and categorizing everything around them , which is favored through order.

They show special interest in moving from one place to another , especially if they have learned to walk.

Almost without the need for direct teaching they usually acquire a wide vocabulary .

It involves the development of the senses. While both hearing and sight are active from birth, as they develop they acquire a special sensitivity and an ability to learn through touch, taste and smell.

6. Sensitive period of social life (from intrauterine life to 6 years)

It refers to the need to relate to one’s peers and the process of acquiring certain important norms for living together .

Although it is easier to learn certain things according to the time of development, it can also happen that a sensitive period ends before the learning that was due to it has been reached, which can make it very difficult to teach it in the following stages.

To prevent this, educational methods should offer not only the development of intellectual skills , but of the appropriate elements to favour learning according to each sensitive period.

From there, Montessori also developed an explanation about “the tantrums” or “tantrums” of the children, which sometimes seem inexplicable, but which in reality could mean a significant intellectual frustration for not being able to respond to the stimuli that interest them.

For example, when children have spent a lot of time doing the same activity and we adults tell them that it is time to move on to another one, because it seems unimportant to us, or because it takes too long, or because we tend to prioritize quantity over quality; even though the child’s need is still to pay attention to that particular stimulus.

Maria Montessori’s pedagogy has even been described as a pedagogy of attention and concentration , precisely because it promotes the need for children to maintain their attention on certain stimuli according to the stages of development, respecting their own interests and avoiding interference from adults.

What did neuroscience say?

In the field of neuroscience, Maria Montessori’s proposals have been studied and several empirical foundations have been found. For example, that the development of neural connections and networks in the human brain reaches its peak between 0 and 3 years of life (synaptogenesis), which suggests that indeed, during its early stages of development, the brain functions like a sponge that almost automatically absorbs everything around it.

As this development progresses, some neural connections are prioritized according to the information that is most needed to be acquired and organized. That is why, towards puberty, the child has already consolidated a more concrete learning: he has discriminated about what is useful to know, to attend and to experience and what is not, according to what the environment itself has offered him or denied him.