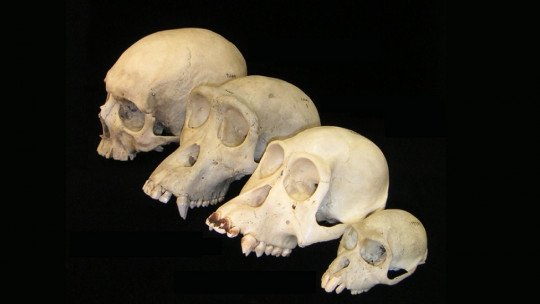 Our brain is one of our most complex and important organs, as well as one of the ones that later on in our lives we finish developing (and this without taking into account that throughout our lives we do not stop creating synaptic connections). This is a structure which is present in the vast majority of animals and which has been developing in different ways and evolving in different ways according to the species over millions of years.

Focusing again on the human being, little by little different structures and capacities have emerged in our ancestors as evolution continued its course, being at present the brain of our species the last one of the genus Homo that remains alive. In this article, we will try to get closer to how the human brain has evolved until the present day .

The Evolution of the Human Brain

Analyzing what the brains of our now extinct ancestors looked like is an arduous and complex task. In fact, direct observation of a brain from species prior to our own (and even from ancestors within our own species) is not possible.

The main problem in determining how the human brain has evolved is quite simple and at the same time extremely complex: the brain is soft tissue, so it does not fossilize and ends up rotting and disappearing . This implies that, with the possible exception of subjects who died of frostbite and who had been preserved in the ice, the observation of a hominid brain is not possible in a direct way.

This does not imply that valuing brain evolution is impossible, there is even a science dedicated to it. We are talking about paleoneurology, which studies how the brain structure of our ancestors must have been based on the analysis of the endocranial structure.

The main element that allows us to try to observe how the human brain has evolved is the cranial capacity, that is, the amount of brain volume that would fit inside a skull of a given species . Not only the size, but also the morphology can give us clues about more or less developed regions.

Another aspect to take into account, and which is in fact also linked to the emergence and progressive increase of intellectual capacity, is the level of blood supply that these brains possess.

A functional brain requires a constant supply of energy, and the more efficient the supply of oxygen and nutrients, the better it functions. And this means that the greater the cranial capacity and the greater the functionality of the brain, the more energy and therefore more blood is needed to carry the basic nutrients to the brain. When we talk about fossils or bones, the simplest way to try to calculate the level of blood flow of our ancestors is through the observation of the intracranial orifices that allow the passage of blood vessels through it.

The development of the brain in the different species of hominins

Mainly based on the cranial capacity and its morphology, we are going to try to approach how the human brain has been evolving throughout evolution and in some of the most representative and known species of the group of the hominins, formed by the bonobos, the chimpanzees, our biped ancestors and us, the sapiens. It should be noted that many of the following conclusions are merely hypothetical, debatable and subject to multiple inferences .

The Ardipithecus is probably one of the oldest ancestors of the human being ever found, although the Aahelanthropus tchadensis (about which there is disagreement between whether it would be the first species of human being or chimpanzee, it could even be the ancestor that distinguished both species) or the orrorin tugenensis are even older. This being, with ape-like characteristics, possessed a small skull of approximately 350 cubic cm (that of today’s chimpanzees ranges from 275 to 500).

This species was already bipedal, but its small brain makes the vast majority of superior cognitive abilities unlikely at best. The fact that they lived collectively indicates a certain level of socialization, similar to that of the family groups of other great apes today. Knowledge of this species and its capabilities is limited.

Australopithecus is a genus of hominid related to us, being one of the first types of hominin that existed after the Ardipithecus. Among the different existing species, one of the best known is the apharensis. This species was characterized by a skull with a relatively small cranial capacity , of around 400-480 cubic centimeters (no larger in size than a large number of chimpanzees, although in proportion to the body it would be somewhat larger). The interior of the skull had different aerial cavities that protected the brain. There is a strong prognathism.

The morphology could reflect the existence of a relatively small frontal lobe, having few superior cognitive abilities and being its reasoning and planning capacity quite limited compared to a current human being. Neither did he possess an excessively large parietal lobe, not being likely the existence of developed brain areas that would allow complex oral language and not possessing a high level of creativity or memory. Apparently the dorsal part of the skull was larger, something that is linked to the processing capacity of visual perception.

Homo habilis was one of the first representatives of the genus homo. Homo habilis has a larger and slightly more rounded skull, with a cranial capacity of about 600-640 cubic cm.

It has been discovered that this species was capable of creating rough tools , which requires a certain skill in planning and a development of the frontal area somewhat higher than the previous species. It also requires more eye-hand coordination, the motor area being probably somewhat larger. The fact that remains indicating that they were hunting have been detected also suggests the capacity to generate strategies and an improvement in the level of communication.

The bulging of the parts of the cranial vault corresponding to the Broca and Wenicke areas is observed, and it is not unlikely that a very rudimentary form of language will emerge, strongly supported by gestures and visual communication in general. There is probably a greater level of blood supply to the brain.

The cranial volume of this species varies between 800 and 1000 cubic cm, being this species the one that started to dominate and use fire as a tool. They created tools and hunted cooperatively. Although to a lesser extent than later species, they probably had a slightly more developed frontal lobe . The elongation of the back of the skull could indicate a greater development of the occipital, parietal and temporal lobes.

Neanderthal man is our closest extinct relative and in fact lived with our species for thousands of years .

The cranial capacity of the Homo neanderthalensis could even be higher than ours, reaching between 1400 and 1900 cubic cm. This means that it is not known what level of abstraction they could reach. However, the morphology of its skull suggests a somewhat smaller frontal than that of the sapiens , but at the same time a larger size of the regions of the occipital lobe, dedicated to body self-control and perception.

It is known that they took care of their patients, probably had a language similar to ours and sometimes they carried out burials, besides dominating a type of relatively developed lithic industry called MUSTERIAN lithic industry. All this implies that they possessed an area of language and that they had a capacity for abstraction, empathy and a high degree of self-awareness .

Our species, which has traditionally been considered the most evolved and intelligent, is characterized at the cerebral level by a wide development of the neocortex and especially by the enormous size of our frontal lobe. This is one of the elements that stand out the most in us and that allows us to perform and possess superior cognitive functions such as reasoning or abstraction.

Also the artistic creation was considered for a long time exclusive of our species, although nowadays it is considered that the Neanderthals could also make different cave paintings and ornamental elements. In terms of energy and nutrient consumption, it is estimated that our brain uses up to 20% of what we consume. It is also considered that the level of blood circulation in our brain has increased sixfold compared to the first hominids .

However, our cranial capacity is lower compared to that of Neanderthals, with ours being around 1300-1800 cubic cm. Although their greater cranial capacity does not mean that they had more or less intelligence (depending largely on the organization of the brain and not only its size), we can not help but reflect that perhaps earlier or different species were much more capable than originally thought, being something to be valued in the future.