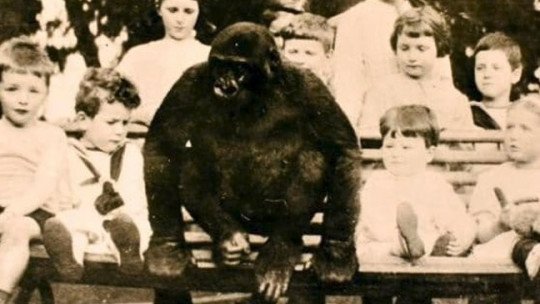 The history of mankind has been full of examples in which human beings have forcibly subjected parts of nature on a mere whim. Sometimes it has not even taken the excuse of satisfying basic needs of the population to destroy ecosystems and exploit animals.

The story of a gorilla named John Daniel is a reminder of that. For years, he grew up living with a family in Uley, a town in southern England. There, this primate was raised as a child .

John, the gorilla who drank tea at 4

It has long been known that great apes, like gorillas, bonobos and chimpanzees, have a level of intelligence that makes them prone to learn many of the human ways. This fact, together with the exoticism of having a gorilla at home as a sign of distinction and social position, is what made that in 1917 a gorilla cub was sold to the Mayor of London for £300 at the time.

John had been born in the Gabonese jungle, but after being captured by the same men who killed his parents, his only function became ornamental, an entertainment.

During his first year living among humans, gorilla John Daniel began to quickly learn the behavioral patterns related to good manners and etiquette that one would expect from a child of the upper class.

When Alyse Cunningham, a relative of the Mayor of London, took over John, he was moved to a small town called Uley. There he would put into practice what he had learned and mix with the children of the neighbourhood.

John Daniel quickly became the center of attention in the entire neighborhood. John was a wild animal in everyone’s eyes, and no one would have been surprised if he had attacked someone in an unexpected fit of rage. Yet the gorilla proved to be incredibly peaceful and friendly.

Despite the fact that he was already of considerable size and outweighed all the children of his age, his way of life was full of refinement . He learned to make his bed, wash himself, helped with some household chores and walked with the little ones, who appreciated his company very much.

In fact, Alyse Cunningham took him as an escort to high society dinners, and also attended tea meetings with his friends.

John David seemed to meet all the expectations of what was expected of him as a pet and for entertainment. But… would humans fulfill their role as protectors of John? Not for long.

Abandonment and return to the cage

No matter how much his behavior conformed to the demands of the people around him, John was still a gorilla, and that could not be changed. He continued to grow at a great speed, and there came a point when because of his size and weight it began to be very difficult to keep him.

That’s why Alyse Cunningham decided to give it to a nursing home where it would be cared for. However, she was tricked, and John ended up being exploited in a circus .

The gorilla’s health declined rapidly, and its new owners deduced that it could be a problem caused by the fact that it missed Alyse.

This idea made the circus write a letter to Mrs. Cunningham, so that she would go there, and the plan took effect: she went there quickly. However, she did not arrive in time: John David died earlier due to respiratory complications in 1922 . It is currently dissected and exhibited in the American Museum of Natural History.

There are more cases of primates raised as children

John David’s story is tragic, but it’s not the only one of its kind. For example, in the 1970s a family decided to raise a baby chimp as if it were just another child and, in the process, try to get it to learn an advanced form of sign language.

Nim Chimpsky (name given as a clear reference to the linguist Noam Chomsky) grew up happily during his childhood, but when he reached adolescence he was sent to an animal experimentation center and never again interacted with humans in a regime of semi-freedom. Nor did his progress with sign language help him avoid becoming part of the production and marketing machinery again.

Similarly, other primates such as Nim and John Daniel have been raised since they were small to learn the basics of the way of life humans lead in the West .However, when for one reason or another they can no longer relate to their caregivers in semi-freedom, they quickly fall into depressive states.

Getting used to living like a child and then moving into a cage is very hard, because of the emotional pain it produces and also because of the lack of physical well-being. The simple fact of being in isolation can cause health to crumble , as was shown, for example, during Harry Harlow’s maternal deprivation experiments.

In any case, the need for affection and quality companionship is not just a human characteristic, although we often forget it.