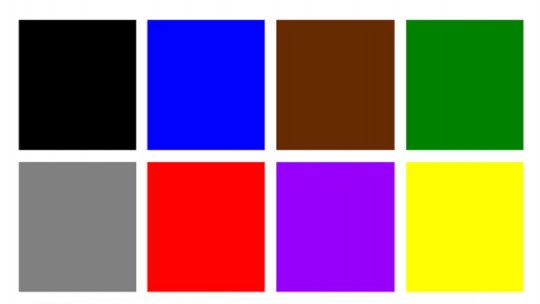 The Lüscher Test is a technique of projective evaluation that starts by relating the preference or rejection of different colours with the expression of certain psychological states. It is a test that is widely used in different fields and that has given rise to various controversies due to the nature of its application and its methodological criteria.

We will now see what some of the theoretical foundations of the Lüscher Test are, and then explain the process of application and interpretation, and finally present some of the criticisms made of it.

Origins and theoretical foundations of the Lüscher Test

In 1947, after having studied the relationship between colour and various psychological diagnoses , the Swiss psychotherapist Max Lüscher created the first emotional and psychological assessment test based on a preference for certain colours and their relationship with personality.

It is a projective type test, that is, an instrument for the exploration of personality and psychism used for diagnostic purposes in different fields such as clinical, labor, educational or forensic. As it is projective, it is a test that seeks to explore psychic dimensions that are not accessible by other means (for example, through verbal language or observable behaviour).

The Lüscher Test is based on the idea that the serial choice of eight different colours can account for a certain emotional and psychosomatic state.

The relationship between colors and psychological needs

The Lüscher Test starts by relating the theory of fundamental and complementary colours to the fundamental needs and the needs that intervene indirectly in the psychological mechanisms.

This is a universal phenomenon shared by all people, regardless of cultural context, gender, ethnicity, language or other variables. Likewise, it is defended under the argument that all individuals share a nervous system that allows them to respond to chromatic stimulation, and with this, activate diverse psychological mechanisms .

The Luscher test takes into consideration two elements that relate psychological states to the choice of certain colors. These elements are the following:

That is to say, it starts from considering that all people can perceive equally the different chromatic ranges, as well as experience the same sensations through them. It therefore attributes an objective character to the experiential quality associated with each colour . For example, the colour red would activate in all people equally a stimulating and exciting sensation, independently of variables external to the people themselves.

To the latter is added a subjective character, since it maintains that, for the same sensation of excitement that the color red provokes, one person can prefer it and another can perfectly reject it.

Thus, the Lüscher Test considers that the choice of colours has a subjective character that cannot be faithfully transmitted through verbal language, but that can be analysed by means of the apparently random choice of colours . This would make it possible to give an account of how people really are, how they look or how they would like to look.

Application and interpretation: what do the colours mean?

The procedure for applying the Lüscher test is simple. The person is presented with a bunch of cards of different colors, and is asked to choose the card that he or she likes best . He or she is then asked to order the rest of the cards according to their preference.

Each card has a number on the back, and the combination between colours and numbers allows an interpretation process that depends, on the one hand, on the psychological meaning that this test attributes to each colour, and on the other hand, on the order in which the person has arranged the cards.

Although the application of the test is based on a simple procedure, its interpretation is quite complex and delicate (as is usually the case with projective tests). Although it is not a sufficient condition, in order to carry out the interpretation it is necessary to start by knowing the meaning that Lüscher attributes to the choice or rejection of the different colours .

They are known as “Lüscher colors” because they are a range of colors that have a particular color saturation, different from that found in everyday objects. Lüscher chose them from a pool of 400 different color varieties, and the criterion for their selection was the impact they had on the people he observed. This impact included both psychological and physiological reactions. To structure his test, he classified them as follows.

They represent the fundamental psychological needs of the human being. They are the colours blue, green, red and yellow. In very broad terms, blue is the color of involvement affects, so it represents the need for satisfaction and affection. Green represents the attitude towards oneself and the need for self-affirmation (the defensiveness of the self). Red alludes to excitement and the need to act , and finally, yellow represents projection (understood as the search for horizons and the reflection of an image) and the need to anticipate.

Reporting a pleasant perception in the presence of these colors is for Luscher an indicator of a balanced psychology free of conflict or repression.

The colours are violet, brown, black and grey. Contrary to the basic or fundamental colours, the preference for complementary colours can be interpreted as an indicator of stress experience, or of a manipulative and negative attitude. Although they can also indicate some positive qualities according to how they are placed. Likewise, the choice of these colours is associated with people who have experiences of low preference or rejection.

The colour violet is representative of transformation, but is also an indicator of immaturity and instability. Coffee represents the sensitive and the corporal, that is to say, it is directly connected with the body, but having little vitality, its exaggerated choice can indicate stress. Grey, on the other hand, is indicative of neutrality, indifference and possible isolation, but also of prudence and composure. Black is representative of renunciation or abandonment, and to a maximum degree, may indicate protest and anguish.

Finally the colour white works as the contrasting colour of the previous ones. However, it does not play a fundamental role in the psychological and evaluative meanings for this test.

The interpretation of the test is not completed by simply attributing a meaning to each colour. As we said before, Lüscher connects such meanings with the subjective experience of the person being evaluated. In other words, the results of the test depend largely on the position in which the person has arranged the colour cards . For Lüscher, the latter gives an account of the position and direction of individual behaviour, which may be Directive, Receptive, Authoritative or Suggestible.

Such behavior can, in turn, be in a constant or variable position; this varies according to how the link is established with the other subjects, objects and interests of the individual. The interpretative procedure of the Lüscher Test is based on an application manual which includes different combinations and positions of the colours with their respective meanings.

In methodological terms, for Seneiderman (2011) the projective tests have value as “bridge hypothesis”, since they allow establishing connections between metapsychology and the clinic, as well as exploring dimensions of subjectivity, which otherwise would not be intelligible. By starting from the ambiguity and wide freedom of the answers, these tests allow access to elements that are sometimes difficult to verbalize, such as fantasies, conflicts, defenses, fears, etc.

However, as with other projective tests, Lüscher$0027s has been attributed a “subjective” mode of interpretation, meaning that its interpretation and results depend largely on the personal criteria of each psychologist or specialist who applies it . In other words, it is concluded that it is a test that does not offer “objective” conclusions, which has generated a lot of criticism.

In the same sense, it is criticized for the impossibility of generalizing its findings, due to the lack of standardizations that meet the methodological criteria of objectivity of traditional science. Criteria that support, for example, psychometric tests. In this sense, projective tests have a scientific status that has caused quite a lot of controversy, especially among specialists who consider this type of test to be “reactive” and who, in the best of cases, have proposed to systematize them quantitatively.

Thus, this test has been criticized both for the lack of criteria that could ensure both its reliability and for the low possibility of reproducing its results. On the other hand, the ideas of functionality and pathology (and the possible reproduction of biases, prejudices or stigmas of various kinds), which theoretically support the interpretations of this test, have also been criticised.