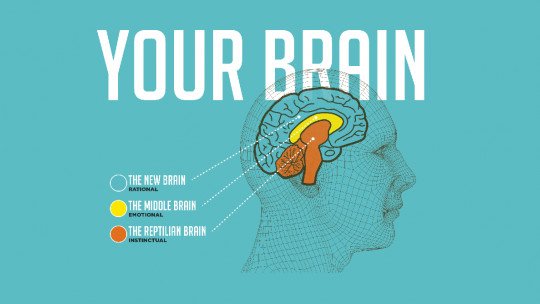 The human brain is the most complex system known. That means that, if you want to understand how it works, you have to find patterns and regularities in its functioning and structure; in other words, you have to try to formulate useful and simple explanations about this set of organs.

Paul MacLean’s triune brain , which is sometimes known as the 3-brain theory, has been popular for years for grouping various regions of the brain into different sets that, as proposed by this neuroscientist, perform different tasks. The differentiated structures would be, according to MacLean, the reptilian complex, the limbic system and the neocortex.

Understanding the idea of the triune brain

Paul MacLean’s idea of the triple brain is based on the idea that in the human brain inhabit 3 different brain systems , with their own logic of operation, and that each of them has been appearing in our evolutionary line in a sequential way, one over the other. That means, among other things, that these three brains would be relatively independent and that they would relate to each other following a hierarchy, depending on their age and the importance of their functions for our survival.

The reptilian complex, for example, being the first to appear, would be the structure that carries out the most basic and most important functions for survival in the here and now, while the neocortex, being the most recent structure to appear in the evolutionary line that leads to Homo sapiens, would be the one in charge of the most refined and complex functions.

The logic that follows this conception of the human brain is very reminiscent of a way of understanding evolution as a process in which the new accumulates over the old , so that these two parts maintain a relative independence from each other, although they affect each other. It also reminds us of the idea that the emotional and the rational are part of two diametrically opposed psychological dimensions, and that where there is one there is no room for the other.

The parts of the brain according to Paul MacLean

Now that we have gone over the ideas on which the triune brain model is based, let’s look at its separate parts:

For Paul MacLean, the concept of the reptilian complex served to define the lowest zone of the prosencephalon , where the so-called basal ganglia are located, and also zones of the brainstem and cerebellum responsible for maintaining the functions necessary for immediate survival. According to MacLean, these areas were related to the stereotypical and predictable behaviours that he believes define underdeveloped vertebrate animals such as reptiles.

This structure would limit itself to making simple and impulsive behaviors appear, similar to rituals that are always repeated in the same way, depending on the physiological states of the organism: fear, hunger, anger, etc. It can be understood as a part of the nervous system that is limited to executing genetically programmed codes when the right conditions exist.

The limbic system, which according to MacLean appeared with the most primitive mammals and on the basis of the reptilian complex, was presented as a structure responsible for the appearance of the emotions associated with each of the experiences lived .

Its usefulness has to do with learning. If a behavior produces pleasant emotions, we will tend to repeat it or try to change our environment so that it occurs again, while if it produces pain we will remember that experience and avoid having to experience it again. Thus, this component would have a fundamental role in processes such as classical conditioning or operant conditioning.

For MacLean, the neocortex was the most recent evolutionary milestone in the development of our brain . In this complex structure resided the ability to learn all the nuances of reality and to draw the most complicated and original plans and strategies. If the reptilian complex was based on the repetition of processes entirely by biology itself, the neocortex was permeable to all kinds of subtleties coming from the environment and from the analysis of our own acts.

For this neuroscientist, the neocortex could be considered the seat of rationality in our nervous system , since it allows the appearance of systematic and logical thought, which exists independently of the emotions and the behaviors programmed by our genetics.

The three-brained model and marketing

The idea that we have a reptilian, a limbic and a rational brain has long seduced many people in the world of advertising, market research and marketing. The triune model allows us to consider separately three areas of people’s psychological life that are very easy to learn and internalize: one rational, one emotional and one impulsive instance.

This has meant that in recent decades the interest of advertising campaigns has focused on appealing to the reptilian and limbic brains, but not to the rational one: the reason is that, considering that these two are more rooted in our evolutionary history, they are easier to predict and, at the same time, produce more powerful purchasing needs, given their importance and their hierarchical position as more important pieces of the brain than the neocortex. Advertising and marketing campaigns have moved from thinking of the customer as an agent who needs to be informed about the characteristics of the product in order to make rational decisions according to his interests, to trying to touch the hearts of people in order to sell them a sensation associated with the product, rather than the product itself.

And the truth is that this change of approach is considered a great success; unlike what happened in the 60s, today it is very common to try to seduce potential buyers without talking about the characteristics of the product or its price: we simply evoke emotions or tell stories easily associated with a lifestyle that we want to make our own. Ignoring the logic of rational brain functioning and putting the target on emotions and basic desires is proving so profitable that even products as expensive as perfumes or cars are promoted that way.

However, beyond what happens in the business world, in neuroscience and in evolutionary biology , the three-brain model is considered to be outdated , among other things, because it understands the development of the brain as a process of construction by “pieces” that have been assembled on top of each other and that execute certain tasks by themselves. Today it is believed the opposite: that in the functioning of the brain it does not matter so much the function that the parts of the brain perform on their own as the way in which they connect to each other to work together in real time.

Moreover, as far as we know, evolution does not cause new components to be integrated on top of the old ones, as they are, without altering them. Every time a mutation makes a trait become generalised, it alters the functioning of the organism as a whole and the way in which the parts that had evolved before work, is not limited to “expanding” capacities. That is why the idea that brain organs “in charge of the rational” are coupled over the previous ones has not been well accepted.

Furthermore, the functions that each of the three brains supposedly performed well define the characteristic behavior of the groups of animals that, according to him, represent the moment in evolution when these structures appeared. On the other hand, nowadays we know that the basal ganglia (which would be part of the reptilian brain) do not have to do with the execution of genetically programmed actions, but are associated to the performance of voluntary movements that after being widely practiced, have become automatic, such as riding a bicycle.