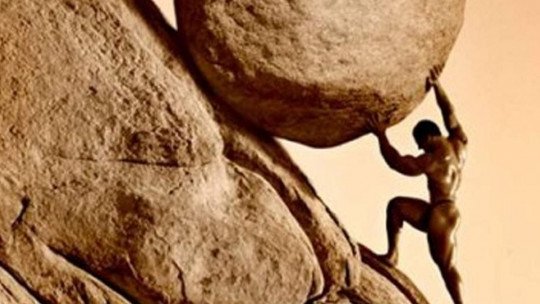 Sisyphus is a famous character from Ancient Greek mythology belonging to the Homeric tradition, created around the 8th century B.C. However, his story has transcended in the socio-cultural context of Hellenic history, because it has come down to us as one of the most important narratives linked to the importance of finding meaning in the things we do and, in general, in our lives.

In the following pages we will briefly review what is the myth of Sisyphus and the stone , and how it can be interpreted from the existentialist and humanist philosophy.

Sisyphus was, according to Greek mythology, the first king of the city of Ephira, currently known as Corinth . He appears characterised in the Odyssey and the Iliad as an ambitious and cruel ruler, who did not hesitate to use violence to stay in power and avoid losing influence over his adversaries, which led him to kill several people. In addition, he did not blush when deceiving people and, in general, was described as having the characteristics of classic tricksters.

Certainly, having almost total control of a large territory and governing it was not uncommon at that stage of Hellenic history, but Sisyphus had the misfortune to impose his will by violating the rules that Zeus imposed on mortals.
According to some versions of the myth, Sisyphus accused Zeus of abducting a nymph, while others point out that he crossed the line by killing several travelers. At the moment when Thanatos, the death, went to look for the Greek king by order of Zeus , Sisyphus deceived the one who was to take him to the underworld by placing the chains and shackles that were meant to be used on him, so that he could not die until Ares intervened.

When the time came, the story did not end with Sisyphus staying in the underworld. True to his perverse and deceitful nature, the Greek king had asked his wife not to perform the typical rituals in honor of the dead, so that Sisyphus would have an excuse to ask to return to the mortal world to punish her. This wish was fulfilled by Ares, but Sisyphus refused to return to the domain of death , so bringing him back meant causing the gods further discomfort. There began the famous punishment of the great stone.

The Punishment of the Greek King: Dragging a Stone

Sisyphus’ punishment was not based on physical pain, nor exactly on humiliation. It was based, in any case, on the fact that he experienced first-hand the nonmeaning.

The punishment consisted in pushing a large rounded stone from the base of a mountain to its summit to, once there, see how it fell rolling back to the starting point. According to some versions of the myth of Sisyphus, this punishment was (or, rather, is) practically eternal.

The pain of the lack of meaning in life

As we have mentioned, Sisyphus is a man who did not exist beyond the network of narratives that structured the belief system of much of Ancient Greek society. But although he only belongs to the realm of myth and fiction, his figure has something with which it is easy to identify even in the contemporary era. Because his story tells us about the tragedy of living an absurdity , something that leads nowhere.

The narrative of Sisyphus connects very well with existentialist philosophy , which in turn has greatly influenced the humanist paradigm of psychology. This group of philosophers is characterized by their concern for the phenomenological aspect of experiences, that is, that which is subjective, private and non-transferable to other people, linked to the consciousness of each person and to sensations that cannot be totally expressed by words.

That’s why the way we give meaning to life, which is an aspect of life that cannot be exhausted by naming it through language, is something very much explored by existentialists. And that is why one of the most important existentialist thinkers, Albert Camus , dedicated a book to this piece of Greek mythology: The Myth of Sisyphus .

Camus and the myth of Sisyphus

For Camus, the main philosophical question that needs to be addressed is: what is the aspect of life that makes it worth living? Or, more succinctly: what is it that makes suicide not the most seductive option?
Circumstantial pleasure may invade our consciousness at a given moment, but it does not in itself make our lives worthwhile. What can make it worthwhile, however, is to make our actions part of a life project that makes sense.

But another of the usual premises from which existentialists start is that life itself has no meaning. This is so because to assume that it does would also be to accept that beyond the very existence of things there is something else, a story that structures and vertebrate reality; but this does not happen. Reality simply is, exists, and nothing more . That is why, for Camus, it is one who must embrace the project of giving meaning to life, and not fall into the trap of adopting an existence like the one Sisyphus had when he dragged the stone up the slope again and again.