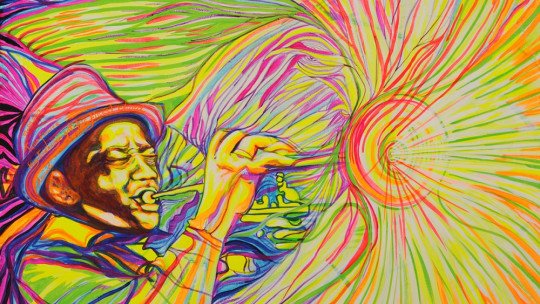 Mood and anxiety disorders are two of the most frequent mental problems in the western population today. Fortunately there are a wide variety of methods that allow sufferers to reduce or even make their symptoms disappear. However, in many ways these solutions are not entirely satisfactory.

Often the use of psychopharmaceuticals is required, which allow the control of the symptoms while the psychological therapy is being carried out. However, in some cases the medicines prescribed to combat these symptoms are not effective enough or take a long time to start working, so that even today the effects of new substances or possible applications of elements not used so far in a therapeutic way are still being investigated.

This is what happened to a retired psychiatrist, suffering from bipolar disorder with a high proportion of depressive episodes, who, faced with the infectivity of conventional methods , decided to try to treat his depression by smoking DMT every day .

Dimethyltryptamine or DMT is a psychodisleptic-type substance that generates alterations in perception in the form of hallucinations . Such hallucinations are generally brief in nature and often have a mystical and existential content. It is considered one of the most powerful hallucinogens, and is usually consumed orally or by smoking, having almost immediate effects.

This substance is part of the well-known ayahuasca, a concoction used in some indigenous tribes of America in a ritual way to experience different “mystical” visions. It is an illegal drug and has the potential to cause psychotic episodes , confusion and anxiety. At present, the consumption of DMT appears to be linked to that of MAOI-type antidepressants, which allow its effects to be potentiated and prolonged (as it is naturally metabolised quickly).

DMT can be found in various plants , although in small amounts it also appears in some regions of our brain. Sometimes called mystical or God molecule , it has been popularly linked to the experience of extracorporeal phenomena and sensations in near-death experiences. It has sometimes been speculated that it also occurs during sleep.

Possible antidepressant effects of this drug

Although it is not considered to produce feelings of euphoria like other psychodisleptics, there has been speculation about the possibility of using this substance or derivatives of it in the treatment of depression or addiction to other drugs , and therefore different research has been carried out in this respect.

In controlled studies it has been found that the administration of DMT can produce relaxation and a decrease in depressive symptoms in low doses, although this effect should be replicated and the possible complications derived from this should be analysed (the trials had very few participants).

The case of the former psychiatrist who was medicated with DMT

Suffering from a bipolar disorder in which depressive episodes predominated and in which conventional medication is not effective, and based on the results of previous studies carried out on ayahuasca and DMT, a retired former psychiatrist of forty years of age decided to try to treat his depressive symptoms through the daily consumption of this substance .

The subject in question acquired the substance illegally, through the deep web , and started a treatment in which DMT was administered daily.

The doses were extremely high, at around one gram per day .In spite of this, due to a slight improvement in his mood, the subject decided to add to his treatment the administration of phenelzine, an MAOI or monoamine oxidase enzyme inhibitor used in the treatment of atypical depressions, despite the fact that it requires exhaustive control of aspects such as diet, as it can easily cause liver failure and sudden and dangerous rises in blood pressure.

This second substance greatly enhances the effects of DMT. During this period, the family would later report that the experimenter was beginning to manifest hypomaniacal and erratic behavior, as well as showing a significant increase in his level of religiousness . He also presented a decrease in sleep, which the former psychiatrist treated with clonazepam.

However, six months after starting his self-medication the individual had to catch a plane out of state and was forced to stop consumption for a few days. This sudden cessation of the substance supply caused him to go into severe withdrawal and he was taken to hospital.

The subject suffered a severe psychotic episode and also manifested manic symptoms, aggressive behaviour (having to be reduced and contained) and difficulties in communicating. He then collapsed, suffering convulsions and even needing to be intubated for a day while being stabilized. Once he was stabilized, he began to show logorreic behavior, presenting powerful religious hallucinations in the course of which he even demanded that an exorcism be performed.

After the administration of a treatment that lasted one week, the symptoms seemed to decrease. Finally, an outpatient follow-up of the patient’s condition was proposed, whose current condition has not been transcended.

Implications of the case

The case of this ex-psychiatrist has important repercussions that should be considered. DMT is a substance that needs to be studied carefully and which currently has no approved therapeutic use , and further exploration of its effects and risks is needed.

It has been stated that it can also generate manic and psychotic episodes due to its hallucinatory effects in cases of previous psychopathology or other substance use. In the case that gives rise to this article, moreover, the dose used (1 gram a day) was exaggeratedly high, which increases the risks.

In addition, research previously conducted worked under controlled conditions in which volunteers manifested severe and chronic depression, but not bipolar disorder. In bipolar disorder there have been at least episodes of hypomania , and in the case of the former psychiatrist the clinical history reflects the existence of a previous manic episode. By this we mean that the use of DMT could lead to an increase in manic symptoms (as would in fact occur in this case).

In the same way, as with other substances, it must be taken into account that the acquisition of dependency and tolerance to a substance implies that when faced with a sudden withdrawal, withdrawal syndromes of varying severity may arise that could even end in the death of the subject. Whenever withdrawal of a substance occurs, it should be gradual and controlled.

Finally, another of the issues we can see in this case is that of self-medication carried out by this former professional in psychiatry. Although in the case of this subject it was someone who had training linked to the world of psychotropic drugs, self-prescription and self-administration of drugs can have severe consequences in those who carry it out, especially if it is done without knowledge of the subject or of the possible adverse effects, interactions or indicated doses.