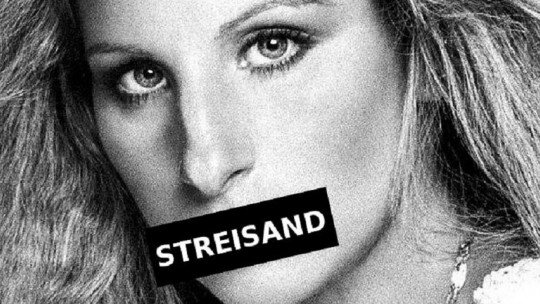 In 2005, a pilot and a photographer flew over several locations along the California coast to obtain quality aerial photographs. The intentions of both were to publish some of these images on a specialized website, but by chance some of the photographs showed the house of the famous singer Barbra Streisand .

So far everything is more or less normal, but what happened after that is not so normal anymore. The singer, upon learning of the publication of these images, demanded their withdrawal from the Internet portal, as she interpreted the movement as a violation of her privacy. As a result, information that if she had done nothing would have gone totally unnoticed under the waves of information that shake the network of networks every day went viral; hundreds of thousands of people came to know where Barbra Streisand lived, even without pretending to.

This anecdote served to baptize a type of phenomenon that in reality is more common than it seems. It is the Streisand effect , well known today in the field of Social Psychology and the disciplines related to communication.

What is the Streisand effect?

The Streisand effect is, fundamentally, an Internet phenomenon that occurs when a person or organization tries to keep information hidden and, precisely because of this, what they are trying to keep out of the spotlight begins to become known, either by attracting media attention in the first place or by viralizing through personal accounts of users who “spread” that news.

In other words, the Streisand effect is a consequence of forgetting that what we do with the information is in turn another type of information that can attract more attention than that with which it all began. Thus, the second makes the first one interesting and its popularity spreads, especially through the Internet, a medium where news flies.

Its effect on marketing

This fact is of particular interest to both famous people and companies that want to preserve a good image. The latter, for example, often receive complaints from dissatisfied users and sometimes choose to remove evidence of these complaints. This in turn can backfire , either because of videos posted by those affected, comments shared on Facebook walls, etc.

In addition, there are many people on the Internet who are interested in discovering these injustices, however small, and are devoting time and a minimum of effort to making more people aware of these kinds of situations.

Thus, many companies are more committed to transparency, not because of ethical aspects of their work, but to prevent the Streisand effect even if it is of low intensity (for example, with a local scope that leads to information being spread around a city).

Much of what is done to build a strong brand image can go bad if from one day to the next certain information goes viral and discredits the entire organization, so it is worth investing in preventing these situations, for example, by hiring a community manager who will mediate with dissatisfied customers without restricting their freedom of expression.

Why does the Streisand effect occur?

The Streisand effect can be understood from two concepts: reverse psychology and infoxication .

Reverse psychology is the phenomenon by which individuals begin to feel more attracted to an option when it has been forbidden, or when the possibility of seeing it has been forbidden. It is, in fact, something that is sometimes used to educate young children. The idea is that, if it is necessary to impose a ban on choosing that option , then the forbidden content must have some kind of interest, one that we would not have to think about if someone had not appeared to limit our range of possible actions.

On the other hand, infoxication is the phenomenon of a progressive production and accumulation of irrelevant information in which all kinds of news sink that, based on certain objective criteria, can be understood to be useful.

By default, the publication of a news item causes it to be quickly forgotten unless it is broadcast from the beginning by a medium with a wide audience reach. However, on an irrelevant news item it is possible to build a more relevant one , for example, trying to keep it hidden. This makes the information “reflective” and breaks the natural progression that would lead it to go totally unnoticed and forgotten in a few days.