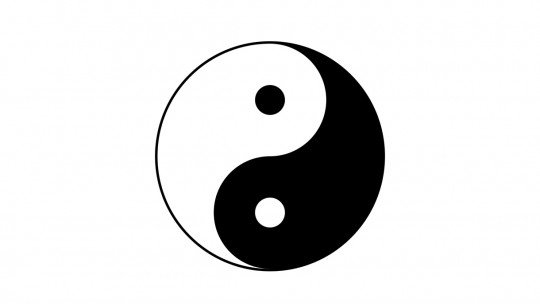 The theory of Yin and Yang is an element that has been part of the philosophical current of Taoism (and ancient Chinese philosophy in general) for thousands of years but has also recently been incorporated into Western pop culture and New Age beliefs. In fact, attempts have even been made to incorporate this concept into holistic therapies not based on psychology or evidence-based medicine.

But… what exactly is this Yin-Yang thing? How does this belief relate to psychotherapy? Let’s look at it.

Yin and Yang in Taoism

When we speak of the theory of Yin and Yang we do not refer to a scientific theory, but to a framework of thought related to the tradition of Chinese philosophy of several thousand years ago. It is, so to speak, a very blurred theory supported by very abstract concepts, something normal considering its antiquity. Moreover, the concepts of what Yin and Yang are cannot be understood without taking into account what Taoism is and what the historical context was in which the fundamental ideas of this philosophy appeared.

Although Taoism as a cohesive religion appeared around the 3rd century AD, the writings on which it is based are attributed to a philosopher known as Lao Tse who is believed to have lived around the 6th century BC. However, as in the case of Homer, it is not clear whether he is a mythical character or not: his name means “old master”, something from which it is easy to relate him, for example, to one of the archetypes of which Carl Jung spoke.

The original Taoism was a philosophy based on metaphysics that addresses questions both about what is the nature of what exists (animals, human beings, seas, rivers, stars, etc.) and what must be done, i.e., morality. According to the writings attributed to Lao Tse, what is right to do emanates from the natural order of things , so nature and morality are one and the same thing. To do wrong, therefore, is to “deviate” from the path of change in nature when it remains in harmony.

With what we have seen so far we have many of the basic ingredients of Taoism: the concept of change, the concept of harmony and the idea that the bad thing is to deviate from the natural “path”. In fact, the name of the only book attributed to Lao Tse is known as Tao Te King: tao means “way” and te, “virtue” .

Following the ideas of Lao Tse means accepting that nature is constantly changing, that there is a path or way in which this change occurs in harmony with nature, and that the virtue is in not altering this harmony, letting the world change by itself. Thus, the way in which this “path of virtue” should be followed is called wu wei , which means “non-action”. Not altering what flows naturally, so to speak.

If Karl Marx understood philosophy as a tool to change the world, Lao Tse held the opposite idea: the path of Tao consists in not altering the universe from personal desires and objectives based on need; one must be guided by simplicity and intuition while renouncing ambitions.

In the end, philosophizing about the Tao cannot lead to anything good, because it is conceived as a metaphysical entity that is beyond the human intellect , and trying to reach its essence from thought could damage the natural order of the universe, which sustains everything that exists.

The Eternal Complementaries of Yin and Yang

Like the Greek philosopher Heraclitus (and all pre-Socratic philosophers in general), in the writings attributed to Lao Tse much emphasis is placed on the process of change, which means that everything around us is constantly transforming, even what appears to be motionless.

How can we explain that in the same things change and permanence seem to exist at the same time? Lao Tse used the idea of duality and cyclical changes to explain it. For him, everything that exists and what we can see contains two states between which a balance is established: day and night, light and darkness, etc.These elements are not exactly opposites and their reason for being is not to put an end to the other, but rather they are complementary, since one cannot exist without the other.

The concepts of Yin and Yang, belonging to the ancient Chinese philosophy, serve to refer to this duality that the Chinese thinkers saw in everything. A duality in which each state contains a part of its complementary, because both are co-dependent; Yin and Yang is the way in which for Lao Tse the change that envelops everything is expressed, which shows the transition between what has been and what will become.

In Yin and Yang a duality is represented in which it is very difficult to separate the two elements that compose it. In fact, in its visual representation it is much easier to understand the whole that these elements form than each one of them individually, something that denotes that they are not exactly the two extremes of something, but two elements of a totality.

More specifically, Yin refers to a state in which things are cold, wet, soft, dark and feminine, and Yang represents the dry, the hard, the bright and the masculine. For ancient Chinese philosophy, this duality would be present in all things, and if it is so abstract and ambiguous it is precisely because it tries to encompass everything .

Human nature according to the Tao

Taoism was not born as a religion in which the rules descend from one or several deities that offer preferential treatment to the human being; in this philosophy, people have the same rank as any other element of the cosmos. That means that they are subject to cyclical changes like everything else, and that there is no immutable essence in them that makes them more important than the rest. That is why Lao Tse’s book emphasizes the need to keep a low profile and follow the path with simplicity.

According to the Tao Te King, all the changes that can occur in a human being are also expressed by this logic of the complementary of Yin and Yang. Therefore, harmony consists in making sure that Yin and Yang are kept in that perfect balance .

However, this only makes sense within the framework of traditional Chinese philosophy and especially Taoism. Outside the philosophical realm this idea of harmony does not serve to describe either reality or the human mind in scientific terms, or at least not by itself.

Some forms of alternative therapies (i.e. without sufficient scientific basis) use the idea of Yin and Yang as a theoretical element to support claims about the healing power of certain practices. The ambiguity of the original Taoism is mixed with all kinds of affirmations of a specific nature about the effects of carrying out one or another activity, as if Taoism and Chinese philosophy were a guarantee of therapeutic practices to be applied in particular situations.

In other words, it mixes a series of statements about practices that work for specific problems (in the style of “if you do taichi you will age more slowly”, etc.) with totally abstract statements (in the style of “virtue is in harmony”). That is why the appeal to Chinese philosophy in general and to Yin and Yang in particular to justify the usefulness of certain strategies is not appropriate in psychotherapy , which relies on concrete solutions to specific problems.