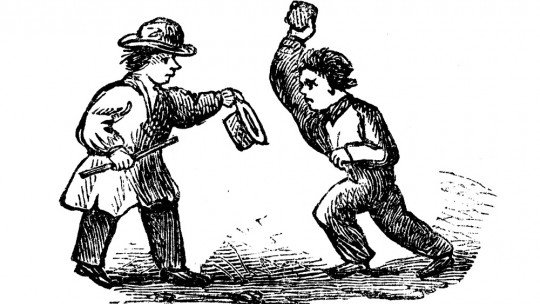 We often wonder how so many social conflicts can exist. So many wars that have happened to humanity, so many ethnic or religious confrontations, so many problems for coexistence or collaboration between people. The experiment of the thieves’ cave is a way of clearing up all these doubts , with surprising results.

This type of study was devised in the mid-20th century, just as World War II was coming to an end, when an infinite number of psycho-social experiments came to light, providing answers to many unknowns arising from the conflict.

What is the burglar’s cave experiment?

The thieves’ cave experiment took place in the United States, near Oklahoma, and was designed to detect the prejudices and ideological burdens that individuals carry on their shoulders , often causing the most serious problems such as xenophobia, misogyny, and homophobia. Intolerance “of the other”, in short. There is a kind of mantra of “them against us” with which we often think we do not feel identified.

It was then two professors from the University of Oklahoma in the United States, Muzafer Sherif and Carolyn Sherif, who had the idea of doing this research. They selected two groups of children between 10 and 11 years of age with no history of conflict, from stable families and a correct childhood to avoid external conditions.

First of all, none of the members of both groups (a total of 24 children) had prior knowledge of the experiment, and none of them knew each other or had crossed paths, as they were selected from different schools. It is important to insist on this section for the successful realization of the experiment.

The 3 phases of the study

We selected a place in the open, in nature. It is the ideal place to get rid of any social stigma, a way to put the individual on an equal footing with the rest by dressing in the same clothes, sharing a similar space and respecting it.

The experiment was conducted in the well-known Natural Park of the Thieves’ Cave (Oklahoma, USA), and that is where its name comes from. As soon as they stepped on the ground, the tutors divided the children in a totally random way into two groups, called Group A and Group B.

In this first phase or stage of the experiment, the authors are in charge of encouraging the feeling of belonging to a collective through joint activities such as swimming, hiking or looking for wood for the fires. In short, activities that strengthen interpersonal relationships.

In the second stage of the thieves’ cave experiment, the teachers introduced elements or situations of friction between the two participating groups, differentiating facts that provoked conflict. Verbal confrontation increased its presence , and the children expressly asked for competitive activities to see who was better.

Surprised by how easy the friction phase had been, they decided to interrupt it and quickly move on to the reconciliation phase . To this end, the researchers made an effort to carry out activities with a common goal in order to eliminate these artificial prejudices that had been created. An imaginary agent was introduced, which was intended to eliminate their edible reserves.

Again, the results were significant. Groups A and B decided to set aside their differences to fight a single enemy . Apart from going in the same direction, the gestures of solidarity and brotherhood between them also increased. The bad guy was no longer “the other”.

And what’s the point of the thieves’ cave experiment? This type of research is intended to clear up some of the unknowns that we often face. The results of the mentioned case showed curious data, especially considering that the participants were people without a special predisposition to conflict.

The teachers were overwhelmed by the ease with which the groups came to create a feeling of hatred towards each other. **They went to the extreme of not wanting to sit with each other at lunchtime , avoiding any kind of close contact, including visual contact. As we mentioned before, this phase had to be shortened.

On the other hand, collaboration overlapped with confrontation just as quickly. What does this tell us? Well, surely the human being is more manipulable than what many people really think , a phenomenon that is very well used by the ruling, economic and scientific classes. It is enough that they tell us that something is bad or good to believe it.