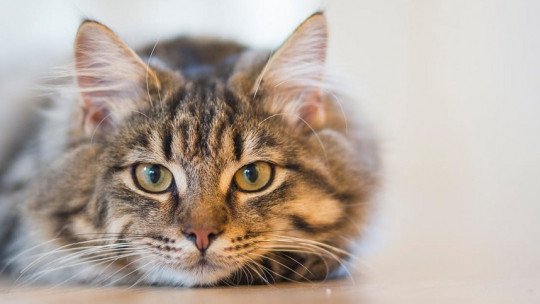 Many people choose to share their life with a pet, and cats are one of the most common species. These cats are very popular, providing companionship and affection while being generally independent creatures, but curiously, despite how well they fit into the life habits of humans, they see things very differently from us.

In many cases, we may wonder how these animals perceive the world. In order to satisfy this curiosity, in this article we will review the conclusions reached by various experts on the night and day vision of cats .

Vision is one of the most developed senses in the human being. Although in other animal species this sense is not as important as for a human due to the great development of hearing and smell, it is still an important tool that allows fixing and locating stimuli with relative precision.

But cats have some peculiarities in the eye compared to a human eye. They have a much larger number of rods, the receptors that perceive light and that are also linked to the perception of movement, while their cones are not as effective as ours and enjoy one less pigment. In addition, these rods establish connections between themselves, creating small nodes prior to connecting to the optic nerve.

Another particular feature of the cat’s eye is that behind the retina they have a layer of reflective cells called tapetum lucidum, which makes it easier to capture any available light. It is also interesting that they have a great capacity of pupil dilation, which on the one hand makes them capture light better in the dark but on the other hand in high light conditions they have to make efforts to focus the image.

They also have a third inner eyelid that keeps the eyes lubricated, which is why blinking is not as frequent.

Characteristics of a cat’s vision

We have been able to see that the eye of a cat, although it resembles in some things that of a human being, has certain differences that allow it to have a different visual capacity. Some of the differences that have been noted throughout the various investigations carried out are the following.

1. A larger than human field of vision

Research by various authors shows that a cat’s field of vision is greater than that of a human. While the human being has a vision of 180º, the cats enjoy the possibility of being able to see in 200º .

Domestic cats have on average a much higher number of canes or photoreceptors than humans. This makes that next to the tapetum lucidum mentioned before they are able to see in the half-light or in the dark, concretely up to 8 times better than us .

A cat’s eyes are very effective at distinguishing movement, especially in front of small or fast objects. However, it has been observed that they have difficulty perceiving very slow movements , being for them something almost static.

There is a popular legend that cats and dogs are colour blind, being able to see only in black and white. Research reflects the opposite; cats are able to see in color . However, they are dichromatic, and do not possess a pigment that allows them to see red. Thus, like us, they are able to see blue and green. Their color vision would therefore be similar to that of a color-blind human with protanopia.

In twilight or dark situations, the cat’s vision is clearly superior and it can see very easily. However, during the day the vision of the cats is not so good , and it has been seen that in circumstances with much light their canes are activated in such a dimension that they are not able to determine which ones are stimulated. Thus, the clarity of cat vision is less, which makes them see the images in a somewhat blurry way.

6. Neither near nor far

In general, the characteristics of the eyes of cats, their size and location on the body make these felines have an optimal field of vision between three and six meters. Before three meters they usually have a certain level of hyperopia , while beyond six meters there may be a slight myopia.