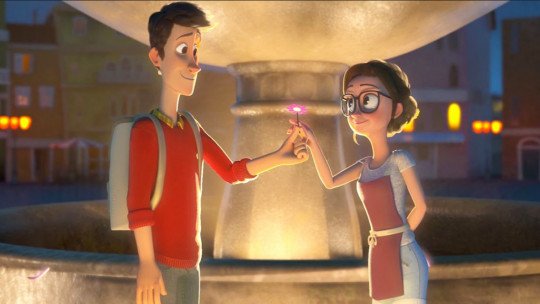 Sometimes, in order to understand an idea it is better to go outside the theory books and turn to artistic forms of expression. This, for example, can also be used to explain how love works and our expectations of it.

For that very reason this short film about dreams and love is interesting, which you can see below : The Wishgranter, or &amp;quot;The Wishfiller&amp;quot;. An audiovisual work that, in spite of telling a relatively simple story, contains a powerful message.

When we experience that psychological facet that has to do with love (or with the absence of a corresponding love), we do it always through our expectations. The most common thing is that we think about our love life not by focusing on the present, but by judging the present from the perspective of someone who accumulates several good or bad experiences.

However, keeping in mind our memories about the role we have played in the world of love before does not make us make the wisest decisions; sometimes, the opposite is true. For example, it can make us see what is happening to us in a dichotomous way of &amp;quot;or black or white&amp;quot;. If you win, you clearly win, and if you fail, this will also be a fact.

In this short animation, this is reflected in the emphasis placed on the mechanics of the machinery used by the wish fulfiler . This is a little man who, from the beginning, is presented as a simple technician, someone who is used to routine and who is not very committed to his work precisely because of its monotony: he simply gives a pre-determined reward to people who throw coins into a fountain.

This machinery represents, in a way, the theory of the just world: you receive what you give. This theory is, in fact, a mental bias that has been much studied from psychology ; we tend to think automatically that everyone has what they deserve, in the absence of reasons that make us change our minds. However, this belief, as a bias that it is, in reality does not always serve to explain what happens in the real world, and when we see that it is not fulfilled it is easy to think that the problem is in oneself, and not in what one does.

This not only lowers our self-esteem; it also immobilizes us and makes it easier for us to stop trying , because we assume that our destiny is not to participate in this karma justice system, in which the relationship between what is given and what is obtained is clear and instantaneous.

When our dreams don’t come true

When the two young people who go to the fountain toss a coin and see that nothing comes to them, they assume that they have failed and that what they have done is useless. Of course, this would be true if the mechanics of love were exactly the same as the machine in the short.However, it is at this point that the wish maker leaves his comfort zone and decides to actively participate in what is going to happen.

After failing several times through his attempts (which is another demonstration that the theory of the just world is not always right), there is something that makes the story have a happy ending: the coincidence between an act of kindness and the fact that the wish fulfiler has tried very hard to make love come.

Luck and the affective life

The fundamental idea behind this short animation is that making an effort does not make sense because it will allow us to create the result we expect in the way we had foreseen, but because it allows us to make luck play in our favour .

Once we have accepted that we will not always obtain immediate benefits that compensate for our sacrifices, it is important to be clear that, since luck has an important role in whether or not we can achieve our dreams, we can also “hack” into the system to make luck play in our favour.

In this short film, the wish fulfiler is an incarnation of that part of the two protagonists that renounces to give up and does not give in to frustration. He is a character who knows that from time to time the karmic justice system can fail, but who instead of being frozen by pessimism, manages to create the options necessary for luck to play in his favour. In the end, it is not only he who makes everything work out, but a mixture of circumstances that would never have happened if he had not committed himself to solving the problem in the first place.

Thus, the message of the short film is: “things don’t always turn out as expected, and that’s why it’s important to get involved in what you do”. It is not convenient to wait for a kind of divine mechanism to solve our problems, we must be clear that it is you who must put more of your part to create the possibilities of success, having clear that possibly you will need the collaboration of others.

Tempting good luck won’t bring us exactly the same happy ending we’ve always fantasised about, because at the end of the day we don’t have complete control over the situation.

However, if we fight hard to get out of our comfort zone and reject the idea of becoming cold and unsympathetic people , we will be the ones, in collaboration with those we connect with, who will build that outcome we were looking for.

This outcome will almost always be unexpected, but in the end, almost all truly original and memorable endings are.