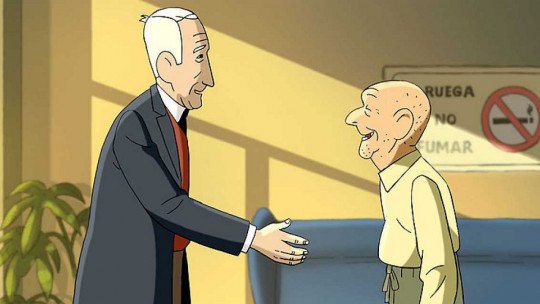 Alzheimer’s disease is one of the best known neurodegenerative diseases , its most characteristic symptom being the progressive loss of memory (which occurs gradually), together with the so-called aphaso-apraxo-agnostic syndrome in which there is also a loss in the ability to speak, the sequencing of movements and the recognition of stimuli.

There is much fear and suffering caused by this disease, and many of the changes and symptoms experienced by those who suffer from it and/or their caregivers are sometimes not understood by the population. The harshness and fear of this dementia have caused it to be often reflected in different arts, such as in the cinema. This is why it is interesting to know films about Alzheimer’s that explore this set of experiences.

There are a lot of movies that are based on or deal with the subject of Alzheimer’s disease. All of them are of great interest and usually treat the subject with great respect, although from different fields and genres.

We will now take a brief tour of about ten of them. Due to their subject matter, most of these films are quite hard , but we cannot but recommend them due to their great quality. But before going straight into it, we should warn you that some of the elements that make up the synopses could be considered spoilers.

Based on a graphic novel of the same name, we started this list with an animated film. The film begins with Emilio being admitted to an old people’s home , in which he enters reluctantly and without explaining to the viewers exactly why. There, he will meet different residents, among whom his roommate, Miguel, stands out for his unethical practices towards his fellow residents.

The two men will end up forging a close friendship despite several conflicts. Little by little, the reason why Emilio is in the residence will be discovered: like other occupants of the centre, he suffers from Alzheimer’s. Throughout the story we will witness, in addition to what other patients in the centre experience, how our protagonist’s disease will progress and how both he and Miguel react to these changes.

The story told in this film takes us to New Brunswick, where the main couple lives on a farm. But with age, Irene (the woman) will begin to show symptoms of dementia , specifically Alzheimer’s. Her partner, Craig, will make the decision to build a house on their land with his own hands, due to the impossibility of continuing to live on the farm, in order to make life easier for Irene. However, she will have great difficulty in doing so, as the existing laws and regulations do not allow this.

As we have said, there have been multiple genders that have addressed the issue of Alzheimer’s. In this case, a thriller. In Remember we see how Zev (the main character), a resident of a nursing home and suffering from Alzheimer’s, decides after burying his wife to escape from the nursing home to seek and take revenge on Rudy Kurlander, a Nazi commander responsible for the death of his family during the war.

Alzheimer’s is a disease that usually appears at an advanced age, but in some people it appears early. This is what happens to Alice, the protagonist of this film, who begins to realize that she has little forgetfulness that is becoming more and more important. Throughout the film we will see how Alice suffers the symptoms of this disease and how she fights to remain herself in spite of it, trying to live in the moment.

South Korean film that shows us the story of Mija, who decides to sign up for a poetry workshop despite her doubts about the possibility of reflecting her being in the verses. However, Mija begins to suffer the first symptoms of Alzheimer’s, having to suffer and cope with her illness at the same time that she has to face numerous problems, such as the rape of a girl by her grandson and other boys. It will be through poetry that Mija will be able to express her pain , her feelings and emotions.

This film tells us how Barbara, a highly beloved and valued teacher, begins to show symptoms of Alzheimer’s disease such as mood swings, forgetfulness and even aggression. This is something that deeply affects her and her husband, and which Barbara tries to solve by placing notes and instructions in different points of the house in order to counteract the loss of memory.

Eventually, you receive a notification that you have won a prize, inviting you to accept it and to give a speech. Despite the reluctance of her surroundings due to her illness, she will insist on going and reading a speech that she will prepare with all her effort.

Turkish film that reflects the difficulties and the disruption in life that this disease represents both for those who suffer from it and for their environment. The film begins with the disappearance of Nusret (the main character), a woman with Alzheimer’s disease who is lost in the surroundings of her home. After finding her, we will see how the family faces the situation , the measures they decide to adopt and how the woman continues to live in spite of her illness.

Not all the films about Alzheimer’s are as recent as the ones we’ve made so far. “In the Golden Pond”, we find the story of a family in Golden Point, which serves as their summer residence. There they will be visited by their daughter Chelsea, who has never had a good relationship with her father. Little by little we will see how the protagonist suffers the effects of Alzheimer’s disease.

Although the film itself focuses more on the love story between the protagonists , this film is very much associated with Alzheimer’s: the story is told by Noa, who is actually reading her diary to her wife. The reason for this: to try to get her, who is in a nursing home and has advanced Alzheimer’s, to remember her story with him. Throughout the film, we will see scenes that tell us how their romance was, along with moments in which we will observe the current situation of the couple.

We could not close this list without making reference to a group that is often left out when talking about Alzheimer’s and that is also going to be deeply affected by it: the family and/or carers of those who suffer from it. This film/documentary offers us the perspective of different people who act as caregivers and how the disease affects both the patient himself and those around him.

My Way, A Moment to Remember, And Who Are You, Noel, The Bride’s Son… There are many more movies that deal with this painful disease. We hope that you liked this small selection and do not hesitate to propose others that could be a good representation of the situation that people with Alzheimer’s live.