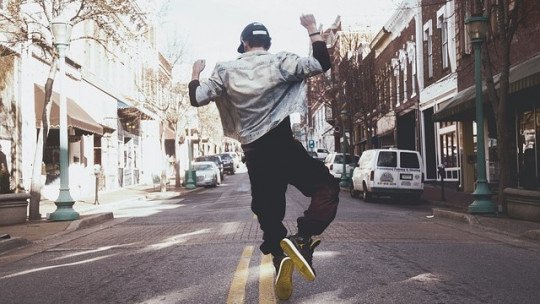 Are you a lover of Rap music and Hip Hop culture? This musical and aesthetic trend was born in New York in the 70s. It was mainly led by African Americans who lived repressed by a racist and unequal society.

Over the years, this lifestyle has gained momentum. That’s how graffiti, break-dancing and rapping were born.

From the first representatives of this subculture, such as MC Hummer, Grandmaster Flash or RUN D.M.C., through idols such as 2Pac or Notorious Big and up to contemporary rappers such as Eminem, 50 Cent or Snoop Dogg, the truth is that rap has been gaining ground.

The torn lyrics and social protest of these rappers has been cementing a hard aesthetic, with explicit lyrics that challenge the political and ethical system of capitalist society.

In this article we have collected the best sentences from Rap and Hip Hop culture . They are famous quotes and verses from different rappers, both Spanish and international, that attest to their critical thinking.

1. Spain is dead, let’s see if she wakes up. The solution? Let the planet explode… (Sho-Hai)

A sample of the innate pessimism on the part of Zaragozan rapper Sergio Rodriguez.

2. God gave you shoes in your size, so put them on and wear them. Be yourself and be proud to be like that. And as corny as it sounds, never let them say you’re not beautiful. (Eminem)

The Detroit MC leaves us with valuable reflections and phrases on self-esteem.

3. There’s a lot of unused potential in places like South Central, a lot of bright, intelligent people who just don’t have that opportunity to show it. (Ice Cube)

It is not only a question of possessing talent, but also of having the social conditions so that this talent can be expressed and valued.

One of the injustices of the Spanish economic system: highly educated people who end up working in low value-added jobs.

7. Look, if you had just one shot, one chance to get everything you ever wanted, in one moment, would you capture it or let it go? (Eminem)

Another phrase from Marshall Matters that exhorts us to take advantage of every opportunity that life offers us. 8. Don’t worry about being a star, worry about doing a good job, and all the best will come to you. (Ice Cube)

To be known, you should first bother to be the best at what you do.

9. The music industry’s approach to fighting piracy is the wrong strategy. (MC Hammer)

A reflection on piracy and intellectual property

Unfortunately, that’s the way our society is.

11. I don’t respect anyone who thinks they’re my boss. (Hitman)

The leader of the Malaga group Hablando en Plata is clear about his freedom, and is willing to exercise it.

The Spanish MC shows, song after song, his steel spirit.

13. For a sincere I love you I die for you every time I don’t feel you, I swear your love was my breath. (Rapsusklei)

Rapsusklei leaves us verses that are poetry in its purest form.

14. Criticize my life when yours is an example. (DuoKie)

No one is entitled to criticize others if they are not a clear example of morality.

It only takes one falsehood to question the entire past.

16. He who has no plug is a buffoon in this fiefdom; where God has two names, one is dollar and the other is euro. (Nach)

The rapper from Alicante has lyrics full of social criticism.

17. Your eardrums receive decibel discharges because the respect I have for the laws of silence is imperishable. (Hitman)

Another famous verse of the Andalusian rapper. A reflection on drugs and individual freedom.

19. For me, the 1970s were very inspiring and very influential… As Snoop Dogg, as a person and as a rapper. I love the ’70s style, the way all the [basketball] players dressed, you know, combing their hair very carefully, driving sports cars… (Snoop Dogg)

A phrase from the nostalgic Californian rapper.

20. Remember who is good for you, who gives you and does not have, who knows what you want and respects your way of being. (The Titó)

The Catalan rapper, member of Falsalarma, leaves us this valuable reflection.

21. The universe, which is my grandfather, told me that after that duel, I came to Earth and the Sun stayed in the sky. (Kase.O)

22. I have changed, neither for a fool nor for a clever man… if you trust in God it is because you distrust yourselves. (Xhelazz)

Another Aragonese rapper, Xhelazz, reminds us of Jung and his “overcompensation of doubt”.

23. I will die like everyone else but I will live like only a few because I refuse to be only another. (Chojin)

A rap line that reminds us to make the most of life.

24. Sometimes the one who asks is smarter than the one who has answers for everything. (Lyric)

David Gilaberte, member of Violadores del Verso, in an ode to skepticism and humility.

The New Yorker recalls the style and sound of the late 20th century. 26. Whoever manages to understand me will be able to dominate me, because even I do not understand myself. (Lil Wayne)

A rap line that shows us the madness and stress of these artists from the microphone.

27. I know what it’s like to give the stick, I’ve received sticks, in this neighborhood everyone knows who the bad guys are… (Noult)

The Badalonese rapper talks about his hometown.

28. I am the voice of the neighborhood, glamour of the suburbs, I skip the schedules and smoke until I burn my lip. (Zatu)

29. We all have fears, no doubt, and facing up to them has always been the best of helps. (The Pieces)

Rap explains to us, with famous phrases like this one, that the best medicine is to draw strength from weakness to face our phobias.

30. I felt young but one day I woke up, the first time a child on the street told me about you, I stopped for a second and thought: it doesn’t matter how old I am, I don’t intend to grow old. (Zatu)

A statement of intent.

31. May there not be one woman who has to hide with make-up that she has the devil for a husband at home! (Rayden)

The Madrid rapper, against gender violence.

32. We all have dependencies, but not all of us know how to quench them, and that is where my self-destruction begins. (Valtonyc)

33. Isolation is the prize, the reward of thought. (Rafael Lechowski)

A poetic phrase from the rapper from Zaragoza.

34. Open the landing gear and stop the world, I’m getting off. That it gives me work and courage to make a journey with more strings than shortcuts. (Rayden)

The old MC from Atresbandas gives us this sad verse.

35. I can believe God if I write a new verse, but tell me who I am in proportion to the universe. (Rafael Lechowski)

A phrase that contrasts feelings of greatness with insignificance.

36. Millions of joys and sorrows, and among millions of people there is always one that fills you. (Shotta)

The MC from Seville, ToteKing’s brother, in a phrase about love and the search for the loved one

37. Blinded by myself, yes, by my self-centredness, but I feel a powerful magnetism in the rhythm… (Kase.O)

Another famous verse of which is considered by many as the best MC in the language of Cervantes.

38. Eyes that don’t see, heart feels twice as much. (Capable)

The brutal rapper from Hablando en Plata, in a thought-provoking quote.

39. I pick up the bottle while I look at the stars and I think: don’t ever trust them or them… (ToteKing)

Both men and women have a lot to keep quiet about how we relate emotionally.

A deep rap line from the Andalusian rapper.