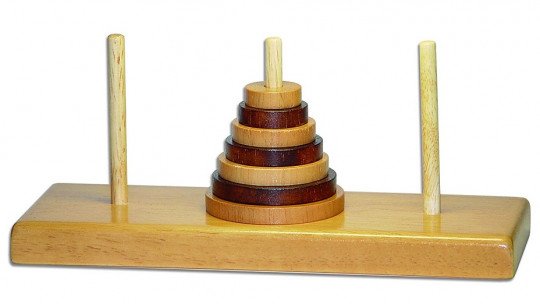 Psychological tests to measure all kinds of constructs are many and varied. Most of them use questionnaires or interviews that the person being evaluated must complete or fill in following a series of guidelines; while others, of a much more practical nature, urge the person to carry out a series of practical exercises which reflect a whole range of skills and cognitive abilities.

One of these tests is the Tower of Hanoi test , an activity that was originally conceived as a mathematical problem but that with the passage of time was introduced into the field of psychological evaluation to measure mental processes inherent in executive functions.

What is the Tower of Hanoi Test?

There are a large number of tests designed to assess skills such as planning ability and executive functioning. One of them is the Tower of Hanoi Test. The test measures some aspects of executive functions since, to complete it, the person needs to anticipate and solve the unknown in a cognitive way , before making any movement.

This test was created in 1883 by the French mathematician Edouard Lucas. Lucas was inspired by a Hindu temple, as well as by the history of its creation, to elaborate the characteristics of the test, as well as the three towers that compose the test. These characteristics have remained practically intact since the time of its creation. However, it was not until 1975 that it began to be used with the aim of understanding people’s behaviour and evaluating different skills and strategies during the resolution of a problem.

The characteristics we spoke about earlier, and which have given this test a certain reputation, are both speed and ease of application, as well as the simplicity of evaluation, analysis of results and interpretation of these.

The person taking the Towers of Hanoi test must solve a transformation problem for which he or she will need some mental effort , which will help him or her to reach the answer through a series of movements. The resolution of the enigma requires the use of complex reasoning in problem solving and learning mechanisms.

What is the test?

The purpose of the Hanoi Towers Test is to move the disk tower along three rods in front of the person , from the initial configuration to a final configuration indicated by the evaluator. This tower is divided into blocks or disks, which the patient must move to restore the tower to its final position.

The second rod consists of a “support” tower that will allow the person to place the disks temporarily. However, one of the requirements of the test is that the person should make as few movements as possible and with as few faults as possible.

In addition, the test was developed with three conditions that restrict the movements that a person can or cannot make. These restrictions are:

Any movement or attempt to skip either of these two conditions will be accounted for as an error and communicated to the person. In the digital variant of the test, the program directly prevents any of these movements and, moreover, is notified by means of an audible signal.

Technical characteristics of the test

As with all tests used in psychological evaluation, the Hanoi Towers Test has a number of technical characteristics both at the level of test administration, population, material, etc.

The Towers of Hanoi test can be administered to both children, adolescents and adults , adapting in each case the levels of difficulty of the test.

The material consists of three small towers each consisting of a stake and three tokens of different dimensions .

The development of the test consists of the person having to change the arrangement of the disks from the initial configuration to the final one, carrying out the least amount of movements and with the least number of errors.

The difficulty of the test can vary and increase , using from 3 to 9 different disks.

The evaluator must collect the number of movements the person makes until the final configuration is achieved. In the same way, must post the number of errors and the amount of time the person needs to solve the problem.

The scores are switched and transformed into a final total score that reflects the person’s ability to solve the problem. Finally, a low number of moves and errors is interpreted as a reflection of good execution.

In what contexts is it administered?

Although not particularly well known, the Hanoi Towers test is a basic and practical assessment instrument , so its administration can be useful in a large number of fields. However, the contexts in which it is most commonly used are

What does the test measure?

As commented at the beginning of the article, the objective of the Hanoi Towers test is to perform an evaluation of the person’s executive functions. Specifically, of the planning and problem-solving capacity.

The executive functions refer to all the complex mental tasks that the person needs to perform to plan, organise, direct, verify and evaluate the behaviours or actions necessary for adaptation to the environment and problem solving.

The mental processes inherent in executive functions are:

However, in the Towers of Hanoi test it aims to emphasize the assessment of planning and problem-solving capacity .