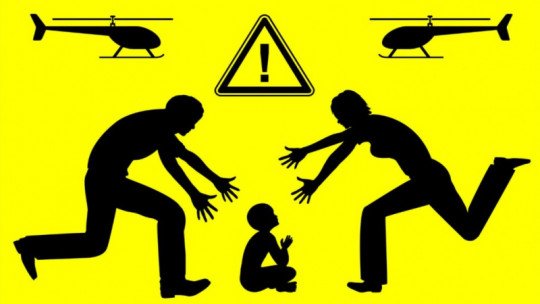 The vast majority of parents genuinely try to give their all for their children and do everything they can to satisfy their needs, but even the best intentioned parents make mistakes and carry out behaviours that are not very beneficial for the development and well-being of their children.

Unfortunately, some parents go beyond simple mistakes and engage in toxic behaviors that seriously harm their child’s growth and emotional health, because the figure of a parent can shape their child’s future and is, along with the mother, the most important educational agent for the child. Are there such things as toxic parents? And, more importantly, what effects can their behaviors and bad educational styles have on the fragile psyches of their children?

There are some parents who are too demanding on their own children and who do not tolerate their failures . These critical parents, who are too much of a perfectionist and expect their children to do everything right, think that the way to achieve this is to remind them of their mistakes over and over again.

This type of behavior can cause serious problems for your descendants in the future and, at times, psychological and emotional damage that can accompany them for the rest of their lives. One of the causes of this behavior can be the father’s low self-esteem, a tremendous feeling of inferiority and even a perfectionist personality.

Although many parents have an exemplary behaviour with their children, there are others who, consciously or unconsciously, have a manipulative attitude and who deeply damage their children , because, sometimes, they cannot escape from them. They are parents who, in addition, tend to have this type of behaviour with other individuals and, therefore, their own children suffer from their toxic behaviour as well.

Manipulators are experts at detecting the weaknesses of others to bring them to their own ground in a stealthy manner. In addition, they often do not stop until they achieve their goal, are insatiable and often have a great need for control.

Authoritarian parents are those who force their children to behave in a certain way without taking into account their needs and emotions. They are intolerant and inflexible and make their children feel bad, even showing themselves to be aggressive when their children do not act as they wish. This includes taking things out of context and acting out of proportion on many occasions.

They are parents who show little communication with their children and try to raise children who are obedient but also very dependent. Because they are not very affectionate, their children often end up being unhappy or spontaneous.

As much as some of us may find it hard to believe that there are parents who mistreat their children, they do exist . Some of them use physical violence at certain times and others more often. Some of them use verbal violence: speaking in bad ways and giving insults. Abusive parents create serious problems in the self-esteem of their children and cause damage that can be difficult to erase from memory.

There are demanding parents as we have said, but it is also possible to find parents who are too critical .They are parents who rarely praise their children and are not usually aware that with their continuous reproaches they end up reinforcing the bad behaviour they are trying to correct. Criticism brings with it judgment, censure and condemnation, and this makes the children become defensive and respond with hostility and distrust.

Children need to feel their parents’ love, especially when they are lonely. Affection at home can help them get through bad times and create bonds of affection that the child learns later. Family models that are not based on affection and trust can lead to problems in children’s relationships in the future.

Communication is basic in interpersonal relationships, because it can avoid many conflicts. But in the case of the parent-child relationship is especially necessary because it can help the child feel loved and is necessary for his or her correct education. Uncommunicative parents avoid having conversations with their children and do not take their needs into account. In fact, parents should take into account not only what they say, when they say it and how they say it, but they should be experts in actively listening to their children.

8. Blames her children for her own failures or frustrations

Some parents are not comfortable with their own lives, for example, because they feel they have failed in their jobs. As a result, their self-esteem may be low and they may be quite irritable and unpatient. These parents, moreover, may make the mistake of projecting their failures onto the people around them , especially those close to them, such as their own children.

9. Projects your fantasies or dreams on your children

While some may blame their children for their failures, others may project their failed dreams or unfulfilled expectations onto the younger ones . In other words, they expect their children to live the life they have not been able to live. For example, forcing them to dance when children do not enjoy this practice. The vast majority of parents want their children to be well and care about them. But some parents turn this behavior into a totally toxic behavior . For example, not letting them go out with their friends for a bike ride because they are afraid they will have an accident. This causes their children to become unsafe and not develop their own autonomy, and furthermore, they do not let them enjoy their life.

11. They do not accept their friendships

Parents’ concern that their children have the life they want may lead their children to end up choosing their career according to their parents’ tastes . For example, some children may stand out as artists and may be happy developing their passion, but, on the other hand, they end up studying medicine and dedicating themselves to something that does not make them completely happy. Everyone should live life according to their own dreams and expectations, not reproduce their parents’.

We have all known very selfish people during our lives, but more complicated is the situation when this kind of self-centered habits and attitudes manifest themselves in parents . Selfish parents only think of themselves and cause a lot of suffering in children who may not feel loved.

Parents are examples for their children and are the most important models for their lives, because they are reflected in them and often inherit certain habits, customs and even behaviour. When parents do not set an example and are a bad model, their children run the risk of learning harmful behaviours . This is without taking into account the emotional damage that can be done to them, for example, if they are alcoholics.

15. Do not teach them healthy habits

Children are reflected in their parents, but it is especially important to know that parents educate their children in adopting healthy habits . Parents who do not have a healthy lifestyle send the wrong message to their children, and this may have an effect on their future health.

Not only that, but when children are very young they are at the mercy of their parents. If they are fed poorly by their parents, the children can suffer the negative consequences of this behaviour. For example, they may be overweight due to poor family eating habits and a sedentary lifestyle.

How to avoid a parenting style that is harmful to children?

There is still no definitive parental guidance, since each family has its own circumstances, limitations and ways of acting. What we do need to take into account is what educational style we want to promote, and to have a certain coherence when transmitting one parenting style or another.

If parents agree on most of the limits and attitudes they should promote towards their children, and accompany the child in a loving and close way, it is much more likely that conflicts will take time to appear, and when they do, they will be of less intensity.