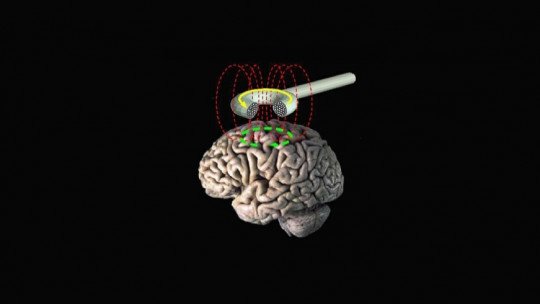 There are many disorders and diseases that affect the brain and its functioning. These disorders can cause or be caused by the fact that sometimes different areas of the brain are not activated sufficiently or function in an altered way. In order to solve them, different mechanisms and treatments have been developed or tried to be developed with more or less effectiveness. One of them, not very well known but which has shown some utility, is transcranial magnetic stimulation .

What is transcranial magnetic stimulation?

The technique known as transcranial magnetic stimulation is a method or type of non-invasive intervention based on the application of controlled magnetic fields to stimulate the activity of nerve cells. Such stimulation does not generate pain and allows for a control of the activity of the target brain areas.

The principle by which it works is the application of electromagnetic induction, applying electrical current to an electromagnet that will be placed on the scalp in such a way that the mentioned magnetic fields are generated (sufficiently attenuated so as not to generate any damage).

Thus, these fields influence the transmission of information, facilitating brain activity (even though it is not fully understood how it works) and the generation of action potentials through neuronal depolarization. The normal rhythm of activation of these neurons is interrupted, something that may in turn generate delayed effects in those neurons with which those affected by the stimulation are connected. It has been associated with depression and long-term potentiation.

The studies carried out so far seem to indicate that it is a methodology that presents some effectiveness and few risks, although it is usually used as an alternative method or as a support to the treatment carried out and not as a first option (other types of treatment that have demonstrated greater consistency and effectiveness are usually preferred).

The basic procedure usually followed in the application of transcranial magnetic stimulation is approximately as follows. Before the treatment, a visit to the doctor should be made to check that the patient does not present any type of pathology or element for which this technique is contraindicated.

As for the application itself, first of all, after the patient is brought into the room, he will be provided with some kind of barrier element such as earplugs so that he can protect his ears. Previously it should or would be advisable to explain to the patient what is going to happen during the session , and it may be necessary to reassure the patient (without using anaesthetic or sedatives).

Next, a coil with an electromagnet is placed on the scalp, placing it in the area to be stimulated. It is possible that instead of one there are two or more elements to be placed, depending on how the stimulation is carried out. The brain mapping will be done, introducing brief pulses to observe and locate the brain areas and their bioelectric functioning. It is likely to notice some sensations and sounds in this phase.

After this, the doctor will proceed to switch on the coil and regulate the intensity of the stimulation , increasing it up to the motor threshold (generally until generating the contraction of the fingers). After reaching it, finally, the magnetic field will be allowed to pass for a variable period of time depending on each case. These sessions may vary in number and timing, and usually last about ten sessions.

There are different ways to apply transcranial magnetic stimulation . Some of the main types are as follows.

One of the ways to apply this technique is with simple pulses, through the application of a stimulus every three or more seconds, or with a train of variable frequency stimuli over the same area for several seconds. Used in research or in treatment of some specific problem.

In this case, two stimuli are applied whose intensity can be the same or different from each other, through the same coil and in the same brain region or with two different coils. Typical of the study of corticocortical connectivity .

This application is one of the best known. It is based on the emission of repeated pulses , applying one (low frequency) or more (can reach twenty in fast or high frequency rms) stimuli per second or less. It is usually used in the treatment of neuropsychiatric problems.

What diseases is it used for?

Although not particularly recognized, transcranial magnetic stimulation has been applied to different brain and psychiatric affectations . Some of the best known are the following.

One of the disorders in which this technique is most frequently used is Parkinson’s or problems related to its symptoms, causing functional improvements and reduction of motor problems .

Perhaps the best known psychiatric application of this technique is in major depression. With a functioning partly similar to electroconvulsive therapy but without the side effects of the latter , it has been observed that this treatment contributes to reducing depressive symptoms if applied to the left dorsolateral prefrontal, although further research is needed

It has also been applied in the treatment of bipolar disorder, although in this case there is a risk of inducing manic episodes. Therefore, special caution is needed in this disorder.

Another field of application is in neurorehabilitation, using stimulation as a way to generate neuronal activation and to try to improve functionality after a brain injury. It is applied, among others, in trauma, heart attacks, spinal cord injuries, negligence syndromes, hemiparesis or cognitive difficulties.

Epilepsy is a disorder where this type of treatment has sometimes been used. It can allow the stimulation of some relevant cerebral areas in order to palliate the deterioration generated by this condition , and can even facilitate the appearance of epileptic seizures in order to locate the area that generates the seizures and evaluate the possibility of other therapeutic options.

The use of transcranial magnetic stimulation has been proposed in the treatment of problems with pain, such as neuropathies and neuralgias , or phantom hand pain (in amputees), fibromyalgia or even migraine.

There is research that suggests the use of this therapy in autism and ADHD , using stimulation on the nuclei that govern attention to cause improvements in the symptoms of these neurodevelopmental disorders and stimulating their attention span. However, much more research is needed in this area.

Depending on the use and the areas stimulated, it is possible to find a utility of this technique in the case of schizophrenia and psychotic disorders. This is especially useful in the stimulation of the mesocortical pathways, so that negative symptoms are reduced. It can also be used in some cases to treat positive symptoms by altering the brain mechanism that produces them (although there may be a risk of generating psychotic breaks).

Contraindications and side effects

As we have said, transcranial magnetic stimulation is usually considered a non-invasive and low risk therapeutic option, with no major complications in most cases. However, this does not mean that it cannot have uncomfortable side effects or even be contraindicated in specific cases.

In terms of side effects, patients who undergo this treatment may generally experience headaches and dizziness, ants and paresthesias on the face and scalp or even some small involuntary spasms. Occasionally, however, more serious disturbances may occur, such as hearing loss, seizures and manic episodes. This is why, although apparently low risk, caution should be exercised with their use.

With regard to people who have contraindicated transcranial magnetic stimulation or who are required to consult or inform their doctor of the presence of specific characteristics before undergoing it, those who have implants or have some metallic element lodged in their body that could be altered by magnetic stimulation stand out. Especially relevant is the case of pacemakers (which stimulation could alter to the point of death), infusion pumps, elements and valves implanted in the nervous system or cochlear implants. Something as simple as dental implants can also pose some danger, as well as shrapnel or metal elements present in the body from some kind of accident or trauma.

Special caution is also required for people who suffer brain injuries such as recent strokes (although sometimes used as rehabilitation from its effects, it is not recommended for use in subjects with stroke). Although it is used as therapy in some cases of bipolarity or schizophrenia, special caution should be taken in these cases since if the state of the subject is not controlled the appearance of psychotic outbreaks or manic episodes may be favoured . The same applies to epilepsy. Those who take any type of medication (whether psychoactive or not) should first consult their doctor. Finally, pregnant women are also contraindicated to this treatment.