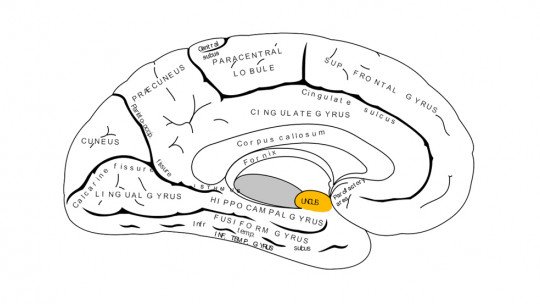 The brain is, as we know, one of the most important organs for our survival. The main organ of the nervous system, it governs and modulates the functioning of the rest of the body systems.

But it is not a simple uniform mass of neural tissue, but consists of different structures that can be divided into different parts, the most superior and external being the cerebral cortex. One of the structures that form part of the cerebral cortex is the uncus , which is also linked to the limbic system. We will talk about this structure of the nervous system in this article.

Uncus: definition and location of this structure

If we look at the cerebral cortex we can see a large number of small convolutions and grooves, which allows the entire cortex to remain in a space as compressed as the inside of the skull. One of these convolutions is the hippocampal gyrus, at the end of which we can find the uncus.

This structure with the shape of a hook (being the form that gives it its name) is also part of the limbic system , connecting with the hippocampus (some authors even consider it part of the hippocampal formation) at the head of this organ and with the amygdala (which merges in part with this structure).

This structure has a relevant role in carrying out different cognitive processes . The uncus participates and would be especially associated with functions related to the limbic system and the olfactory system.

1. Participation in the report

One of its main functions is to participate in the codification of the working memory and to contribute to its consolidation. It has also been observed that it contributes to recording new information in the form of memories , being involved in the antegrade memory.

It is speculated that uncus and its nerve connections have a great level of relationship with the self-consciousness, that is, the one through which we build our life history by situating ourselves in them.

Finally, it is also related to navigation in space, contributing to the formation of brain maps and the ability to orient oneself.

The fact that it is connected to the limbic system means that uncus is related to the regulation of mood and anxiety, and there may be alterations linked to these elements if it is damaged.

Alterations and injuries in uncus

Although not well known by most of the population, uncus in a part of our body of great importance whose injury or alteration can generate various symptoms and harmful effects.

The effects of direct injury to uncus can cause serious problems with orientation and maintaining antegrade memory (i.e. the ability to record new declarative information in our memory). In addition to this being part of the paleo-cortex and receiving olfactory information an injury in this area can also generate the partial or total loss of capturing the smell and aroma.

One of the possible consequences is the generation of a cerebral ictus in the event of the posterior cerebral artery being compressed, which could lead to hypofunction or even death of part of the brain . Understanding the cranial nerve can generate mydriasis in the same hemisphere as the lesion or herniation, one of its most obvious physical symptoms.

However, if what is compressed is the midbrain, there may be loss or alteration of consciousness, hemiparesis, and we could even be facing an injury with the potential to cause brain death in the affected subject.

Some symptoms typical of various neurological mental disorders have been linked to the uncus disorder . It has been linked to anxiety and mood disorders, schizophrenia, various types of brain injuries and intoxications or even a possible alteration in this area has been investigated in psychopathic subjects.