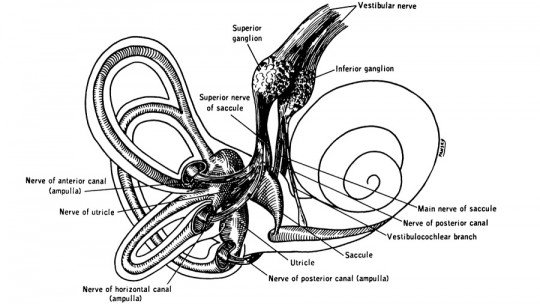 The vestibulocochlear nerve constitutes the eighth cranial pair of nerves and its function is fundamental to our survival, since it is thanks to it that we can hear and maintain our balance.

The way it sends information to the brain is somewhat complex, involving multiple pathways and activating several specific regions and types of neurons. Let’s take a closer look at the importance of this nerve.

Vestibulocochlear nerve, what is it?

The vestibulocochlear nerve is responsible for sending information from the cochlea and the vestibule to the brain , which will be interpreted as sound and balance.

When a sound reaches the ear, the sound waves impinge on the structures inside the ear, causing them to vibrate. The cochlea transforms these vibrations into electrical impulses, which travel through a series of structures that end up in the auditory cortex of the brain.

In relation to balance, when we move our head the hall detects these movements and sends signals to the brain to indicate in what position we are or if we have momentarily lost our balance. Inside this structure we have a liquid that, when moving, activates some cells, called hair cells of the ear, which act as sensors. These cells send the signal to the brain, an organ that will activate the muscles needed to correct the position and maintain the balance.

Parts of this nerve

We will now take a closer look at both sections:

The cochlear nerve (scientific name: nervus cochlearis) is one of the two divisions of the vestibulocochlear nerve, which is responsible for hearing.

At the beginning of this section it is found in the sensory receptors of the organ of Corti , travelling through the inner ear to the brain, where the auditory stimulus is processed.

The auditory information first passes through the thalamus and then reaches the auditory cortex of the temporal lobe.

The cells responsible for receiving the auditory stimulus are hair cells found in the organ of Corti, which is located in the cochlea.

After leaving the cochlea, the nerve enters the internal meatus where it joins the vestibular nerve, forming the vestibulocochlear nerve itself.

Both sections of the complete nerve travel to the posterior cranial fossa, entering the brain through the cerebellopontine angle , along with the facial nerve (NC VII).

In the brainstem bridge, the cochlear nerve fibres make synapses with the posterior and anterior cochlear nuclei. The axons of the anterior nucleus form the trapezoid body.

Many of these fibers decay and end up in the upper olive complex . The axons of the neurons that reach here, together with those of the posterior cochlear nucleus, form the lateral lemnisciae, which travel to the lower colliculus and the medial genuliac bodies.

Axons from the medial geniculated nucleus form the acoustic radiation of the brain , which passes through the internal capsule and ends in the upper temporal gyration and the transverse temporal gyration (Brodmann areas 41 and 42). Here they perform synapses with the cortical neurons.

The vestibular nerve (nervus vestibularis) is the other division of the vestibulocochlear nerve. It receives stimulation from sensory receptors located in the membrane of the auditory labyrinth.

The vestibular nerve is responsible for the sense of balance , spatial orientation and motor skills.

Most of the fibers of this nerve end up in the brain, in the vestibular nuclei, but some of them go directly to the reticular nuclei without the need to make synapses along the way, and they also end up in the cerebellar nuclei.

The receptors receive primary stimuli, and the neurons of the vestibular ganglion transmit the information from the receptors through their dendrites.

Damage to this nerve can involve impairment of the sense of hearing and balance , which manifests itself mainly in the form of hearing loss, dizziness, false sense of movement and loss of balance. When this nerve is affected, it is usually due to tumours, such as acoustic neuromas, which hinder the functioning of the nerve.

To assess the damage to this nerve, the fingers are placed in both ears and clicked , asking the patient if they hear the sounds bilaterally and if they are equal in intensity.

It can be said that it is not always easy to detect diseases that can affect the vestibulocochlear nerve, although symptoms such as those mentioned above will occur, especially those involving loss of hearing and balance. Hearing loss is often an age-related symptom, although exposure to high intensity noise or the use of drugs that can cause deafness as a side effect are also potential causes of nerve damage.

If the fibers that form the cochlear nerve are destroyed, the person begins to have difficulty understanding what he or she hears . This difficulty is even greater when in noisy environments, in conversations where there are more than two people talking at the same time and if there is background noise.

Another symptom that indicates that the vestibular nerve is affected is the appearance of tinnitus, which is the subjective perception of sounds that do not really exist. It is believed that the appearance of this phenomenon is due to the fact that the nerve is damaged and sends involuntary signals to the brain, an organ which interprets them as sounds that are really invented.

Although the intensity of tinnitus varies from person to person, tinnitus can have a major impact on the quality of life of the sufferer, especially if it is accompanied by hearing loss. As a result, people with tinnitus may become depressed, irritable and have trouble sleeping.

If tinnitus is due to damage to the auditory nerve, it is very difficult to eliminate it completely , as it is necessary to repair the damaged cells in the nerve tract and this involves a very delicate surgical procedure. One of the best options for dealing with them, apart from the surgical route, is to teach the patient how to live with them.

It is for this reason that, taking all this into account, it is necessary to stress the importance of prevention and good hearing hygiene.

To avoid having such annoying phenomena as tinnitus or different degrees of acquired deafness, it is advisable to avoid environments with high intensity sounds, as well as taking preventive measures when going to places with concerts and discos, such as not getting too close to the speakers. If working in a noisy environment, such as a construction site where there are drills, protective headphones should be used.