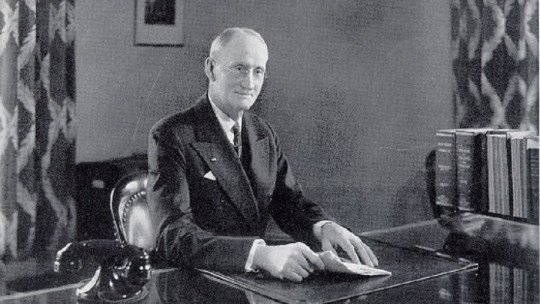 Walter Dill Scott was an American psychologist who made many contributions to applied psychology, especially in the area of industry. As his biography shows us, Dill Scott laid many of the psychological foundations of advertising and the current principles of human resources.

Below you will find the biography of Walter Dill Scott, one of the first to recognize and apply principles of psychology in the business area. The latter in relation to advertising, as he considered the latter to be the “nervous system” of the business world.

Who was Walter Dill Scott? Biography of a pioneer in applied psychology

Walter Dill Scott (1869-1995) was born in Cooksville, Illinois. His education at Northwestern University was in the field of art and education. He later moved to Germany to study psychology under the tutelage of Wilhelm Wundt at the University of Leipzig, where he received his doctorate in philosophy in psychology and education in 1900.

With this degree he returned to the Northwestern University School of Psychology as a professor, laboratory director, and later head of the department. He was also a professor of advertising and applied psychology at the School of Commerce.

Along with several of his colleagues, Walter Dill Scott believed that the field of advertising had a great future. Thus, in 1903, he published, together with other authors , the first book on advertising in relation to psychology : The theory and Practice of Advertising .

From psychology to advertising

Walter Dill Scott was not only interested in psychology, but in world affairs and had a broad understanding of history. This, along with his general orientation in culture, allowed him to see the possibilities of advertising as a popular educational force, which gradually led him to define some standards of truthfulness and effectiveness.

Very soon he realized that advertising could exert changes in the mind, therefore, the laws governing the mind should be taken into account to determine whether an ad will be effective or not. In other words, he suggested that advertising has psychological components that can be exploited.

Also, as Dill Scott analyzed advertisements, he realized that many of them were badly done. From there he began to wonder how he could improve them, and one of the conclusions he reached was that the first thing to do was to select properly qualified people to prepare the ads.

In other words, beyond the essential qualities of effective advertising, Dill Scott began to consider the qualities necessary for a salesperson to succeed . Thus, he quickly became the number one authority in the field of advertising psychology and in the selection and management of human resources.

At the same time, advertising and personnel management were positioned as two key elements for the business field, thus opening a very important door for applied psychology.

Contributions for the management and selection of personnel

Between 1908 and 1915 Walter Dill Scott led a vendor selection study for the American Tobacco Company. His intention was to develop and test criteria for a systematic selection of vendors.

For this, he began by closely observing how the respondents who were in charge of hiring the staff operated . Very soon she realized that they were using a simple method that she described as “give or take”, which does not provide her with the information she needs.

Thus, Scott began to examine and analyze directly the qualities that the company’s most successful salespeople had. He then discussed these qualities with his research team and the company’s interviewers. This allowed him to train the interviewers on how to determine whether applicants met the desired qualities.

Finally, Scott and his team oversaw the implementation of their approach until it was fully demonstrated that the interviewers were effectively selecting the vendors. The result was very important for the company, which led Scott to acquire more tasks in evaluation and personnel management within the same company, and later in others.

Other books that were published later and that have had a lot of impact in the field of business and advertising are Personnel Management and Science and Common Sense in Working With Men .