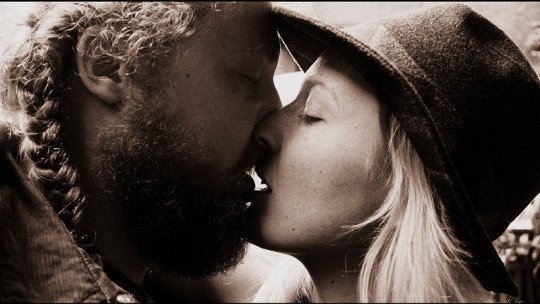 It is well known that the vast majority of human beings kiss, have kissed or will kiss someone at some point in their lives. These curious rituals are surprising because of how much they are given and the many meanings they can hold. There are kisses that serve to reconcile, but they can also denote affection, attraction or even courtesy.

However, none of this changes the fact that kissing, by itself, seems a rather absurd act. Why does it seem so natural for us to approach another person and touch them with our lips? What are kisses for?

What are kisses for? What is their real use?

Finding an answer to this requires, first of all, to dig into our past , to see what this custom is based on. Some evolutionary psychologists believe that kissing is an act to which we are genetically predisposed and whose utility is basic in the perpetuation of the species. For this reason, to ask ourselves what the purpose of kisses is is to ask ourselves how they have helped us to survive.

About this, many researchers have pointed out the importance of kisses in solving two basic problems: finding a partner and bonding with other people.

A wise choice in matchmaking

The first of these functions has to do with our unconscious sensitivity to analyze chemical signals coming from the potential partner’s body.Smell plays a part in this task, but the sense of taste also serves a similar purpose.

Detecting chemical patterns in the other person’s saliva is helpful in knowing the general condition of your body, your hormone levels, and the characteristics of your immune system. In short, kisses are a way of indirectly knowing the state of health of someone who has approached us, knowing to what extent their immune system complements ours, and from there deciding unconsciously if they can be a good reproductive partner.

The second function is the easiest to digest, because most kisses can be understood as a protocol for bonding with someone. However, this process has an unconscious side that goes beyond the symbolic burden associated with this custom. It has been observed that kissing produces an increase in the segregation of oxytocin and endorphins, substances associated with the creation of emotional bonds and the elimination of tension.

In addition, the neurotransmitters serotonin and dopamine, which are associated with falling in love and addiction , are also triggered during the kiss, which, if we add the above cocktail of hormones, can contribute to what is known as romantic love. The person with whom the kiss has been shared suddenly becomes more important.

If we add to this the fact that the kiss could be useful in choosing a partner, it seems clear that its functions are focused on reproduction and rearing .

Our species could be predisposed to kissing on the mouth because of its evolutionary legacy, as these have been observed in other animals as well (bonobos, for instance). , however, would have created varieties of kisses and modelled the way in which they are presented, appearing alternatives to the kiss on the mouth that, however, are perhaps indebted variants of the latter type.

Clearly, no one decides to kiss someone to get information about that person, or even to bond with them. Kisses are there because we like them . Evolution has meant that the main usefulness of these practices, which is located in the long term, is masked by a short-term objective: to obtain pleasure.

This pleasure is based on the large number of sensory neurons found on the tongue and lips. These areas show one of the highest cell densities of this type, and are therefore extremely sensitive to potentially pleasurable stimuli.

Thus, a few seconds of kissing generate a significant flow of information that goes directly to the brain , so much of the mental processes begin to revolve around that experience. It is then that the substances we have mentioned begin to be massively secreted and the neurotransmitters related to pleasure and falling in love take on a central role. That is why a good kiss can make you lose track of time: the whole body is paying close attention to what happens in this interaction.

NOTE: If you want to know more about what kisses are for, you may be interested in the book The Science of Kissing .