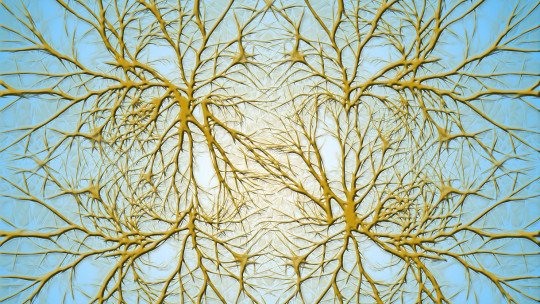 The different parts of the neurons tell us a lot about how these small cells in the brain work.

Neural axons, for example, with their elongated wire-like shape allow electricity to travel through them, regardless of whether or not they are accompanied by myelin sheaths. The dendrites, in turn, fulfill another function that we will see now.

What are dendrites and what is their function?

Dendrites are parts of the neurons that are distributed throughout the body , that is, both in the brain and the spinal cord as well as in those in the ganglia, internal organs, muscles, etc.

In addition, on the surface of the dendrites there are still another kind of microscopic extensions . These are small formations called dendritic spines , which are, in turn, the places where the dendrites perform their main function, as we shall see.

Since the time of the famous Spanish neurologist Santiago Ramón y Cajal, it has been known that neurons are small, relatively independent bodies, that is, there is a separation between them. One part of this space that separates the neurons from each other are the so-called synaptic spaces , which are the points through which these nerve cells pass information to each other by means of substances called neurotransmitters.

The function of dendrites in general, and of dendritic spines in particular, is that of making the main contact of the neurotransmitters that arrive from outside . In other words, the dendritic spines act as terminals to which the stimuli of the other neuron arrive, sending neurotransmitters through the synaptic space. Thanks to this it is possible to establish the transmission of nerve impulses that allows the functioning not only of the brain, but of the entire nervous system, since there are neurons distributed throughout the body.

On the other hand, the potential of the brain to adapt to circumstances (e.g. by learning from experience) is also made possible by the work of dendrites. It is these that regulate the chances of two nerve cells coming into contact more or less frequently, so they decide the “route” that the nerve impulses take.

With the passage of time, the degree of affinity that the dendrites of one neuron gain with the terminals of another leads to the creation of a habitual communication pathway , a fact that affects, even minimally, the progress of the mental operations that are carried out. Of course, this effect multiplied by the number of synapses in the nervous system is not minimal, and not only does it affect the functioning of the brain and the rest of the system, but it is, in itself, the basis of the system.

On the surface of the dendritic spines there are a series of structures called receptors that are responsible for capturing certain types of neurotransmitters and for activating a specific mechanism . In this way, a neurotransmitter such as dopamine will reach a receptor compatible with it and cause it to activate a process in the receiving neuron.

Its role in brain communication

In other words, it is in the dendrites and in the neuronal body that the electrical signals (also called action potentials) that run through the neurons are born and will end up at the tip of the axons, causing this part of the neuron to release chemicals. When the right amount of neurotransmitters reach the dendrites, depolarization occurs, which is the process that generates nerve impulses.

Dendrites are very sensitive to the slightest variations in the type and quantity of neurotransmitters they pick up , and this means that depending on the chemicals they detect they initiate one or another pattern of electrical impulses, or that an electrical signal is not directly generated, if conditions are met.

This means that dendrites do not need to pick up any neurotransmitter to not produce an electrical impulse ; this can also happen if they pick up a certain amount of a particular type of chemical. This is why some psychopharmaceuticals act on the dendrites of the neurons, so that they do not generate electrical signals as they would if it were not for the effect of this active principle.

In short, the molecular imprints that experiences leave on dendrites and neuron terminals are the basis of the functioning of the nervous system and its ability to make its activity vary dynamically. At the same time, they are a fundamental part of the process of managing memories, which are patterns imprinted on those molecular imprints with which the nerve cell works.