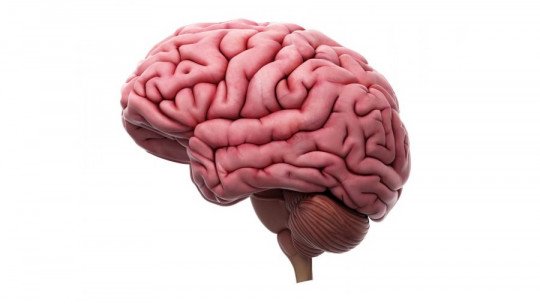 When we talk about the brain, one of the most typical comparisons made is that it resembles the shape of a walnut, since it has a wrinkled shape.

These characteristic wrinkles are due to the fact that the surface of the organ is folded over, allowing it to fit better. However, apart from this, what are the folds of the brain for? Do they have something to do with intelligence? Let’s look at it below.

What are the folds of the cerebral cortex for?

The main reason why the human brain is wrinkled is because folding over allows it to gain some space. Brain folds are what is more appropriately called circumvolutions, while furrows or fissures are the depressions between these wrinkles . The human brain is so wrinkled that, if we could spread it out on a table, we would have about 2,500 square centimeters, the size of a small tablecloth.

According to Lisa Ronan, a researcher at Cambridge University, the cortex of the human brain, the outermost surface of the brain, expands during fetal development. Unlike what many believe, the brain has a consistency similar to that of gelatin.

Being such a soft organ, this makes it a tremendously vulnerable part of the body when pressure is placed on it. In order to avoid that, during the growth of the brain during gestation, the cerebral cortex collides with the walls of the skull , it folds up on itself, gaining a little space.

This space-saving strategy is not unique to the human species. It can also be seen in other mammal species, such as dolphins, elephants and whales. This is why scientists have defined the concept of gyrification, which refers to how folded back on itself the cerebral cortex is in a given species.

Traditionally, gyrification has been seen as the result of a high degree of neurogenesis and growth of dendrites. In our species, as can be deduced by looking at a photograph of the brain, we have a fairly high rate of gyrification and, for this reason, having more folds has been associated with having higher cognitive abilities, as occurs in humans.

However, and after analyzing other mammal brains, something certainly paradoxical has been seen. Despite the fact that human beings are the animal species with the greatest intelligence, there are other animals that have brains with the greatest amount of spin . The most outstanding cases are the brains of elephants, whales and dolphins.

Other functions of gyres and grooves

As we have already seen, these folds, called cerebral convolutions and furrows, have as their main function to allow more space and avoid the cerebral cortex being pressed towards the cranial walls. This means that more neurons can accumulate in the cortex and, for this reason, it has been believed that more folds were synonymous with greater capacity to process information.

In turn, these folds are used by neuroanatomists as criteria to divide the brain into regions, functioning as the boundaries on a cartographic map. In this way, and thanks to these folds, the human cortex is divided into two hemispheres which, in turn, are divided into four lobes: frontal lobe, temporal lobe, parietal lobe and occipital lobe.

Although the idea that the brain wrinkles more to allow packing more neurons makes sense and is physically possible, which would, in turn, give meaning to the theory that more wrinkles mean more cognitive capacity, another explanation for this has also been tried. It has been seen that when the animal is bigger, there is more possibility that it presents a brain with many folds . The bigger the brain during gestation, the more it needs to be wrinkled on itself.

This would explain why there are very small animals, such as rats and mice, which have a smooth cerebral cortex. D uring its fetal development, its brain does not grow enough to need to fold back on itself to save space . On the other hand, this would also solve the question of why elephants and whales have brains that are more wrinkled than ours. Because they are larger, their brains need to wrinkle more while they are forming in the mother’s womb.

However, and although this explanation is quite convincing, there are cases of animals that have smoother brains than they should be considering their size, as is the case of manatees. It is for this reason that another explanation was proposed, halfway between the traditional one that more roughness is equivalent to greater cognitive capacity and the theory of the relationship with brain size. The key would be in the physical properties of certain parts of the cortex .

Some brain regions are thinner than others, which would make them tend to bend more easily. Depending on how they bend in different areas, not only can their physical properties be elucidated, but also the specific function they can perform.

It has also been suggested that, depending on the type of behaviour of the animal species, its brain will show a greater or lesser amount of wrinkles. It has been seen that some mammals with few wrinkles tend to form and live in reduced social groups , while animals with more folds would have more extensive social network behaviours, something that humans, whales and dolphins share.

The Case of the Unfolded Brain

Some time ago, the image of a supposedly human brain, which lacked wrinkles, appeared on the Internet. This brain was a far cry from the traditional comparison of a walnut. More than a nut, this particular brain was reminiscent of a fish, a gout in particular.

This brain was found by photographer Adam Voorhes , who was doing a photo session on the shelves of brain samples at the University of Texas. What is known about this group of brains, in which the smooth brain is found, is that they belonged to patients of the Mental Hospital of the city of Austin, in the state of Texas. These brains had been left in the darkness of oblivion for 20 years, in a closet at the university’s animal laboratory.

An attempt has been made to find out who was the person who had such a curious and at the same time chilling brain in his skull. How did he behave? Was he able to speak? Did he have a properly human conscience? The only thing that can be known on the basis of his brain is that the subject suffered from a serious case of lysencephaly, that is, a brain with less circumvolutions than it should have, although in his case the lack of wrinkles was total.

Normally, cases of lysencephaly are due to errors in neuronal migration during fetal development . It is believed that it could be caused by the action of certain pathogens, especially viruses, which would occur during the first trimester of pregnancy. It has also been theorized that it could be caused by the lack of blood supply while the fetus is forming, although the idea that it is a rare genetic disorder has some strength.

Among the symptoms suffered by people with this strange disease are unusual facial appearance, swallowing problems, severe psychomotor retardation, hand and foot abnormalities, spasms and convulsions. The treatment is symptomatic, only being able to improve, within humanly possible, the welfare of the affected, although their life expectancy is not higher than two years.