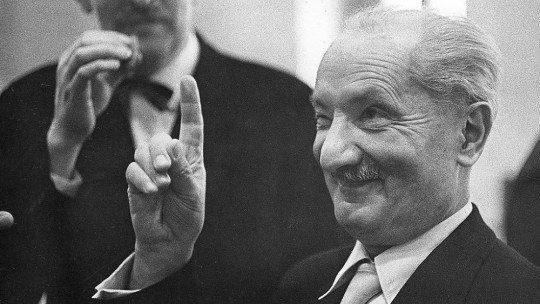 Martin Heidegger was one of the most important philosophers of the 20th century , especially influential in the field of metaphysics as well as in currents such as hermeneutics or post-structuralism. His philosophy has also been fruitful in fields such as psychiatry, sociology or religious studies.

Controversial because of its relationship with the National Socialist regime, its philosophy is marked by the question of being. In his first original contributions to philosophy (which revolve around his best known and most important work, Ser y Tiempo , published in 1927), this question about being is framed in an existential analysis of the human being, which is the entity in which, unlike things, this question about being is given.

Heidegger, however, conceives the human being in an essential relationship with things and with the world, under the name of Dasein, his best known concept , which also supposes a more original theory of knowledge alternative to that of scientific objectivity (although not in necessary conflict with it). What was this conception of the human being of Heidegger, radically linked with the world and the knowledge of it?

From Neokantianism to Being and Time

Heidegger began his philosophical production in the first years of the 20th century, which were dominated, in Germany, by neokantism and the emergence of hermeneutics. After the metaphysical abstractions of German idealism , neokantism sought a return to language and Kantian problems in matters of theory of knowledge . He investigated, for example, the question of knowledge and truth, which for neo-Kantians occurred in pure, universal and objective categories, especially in the field of science.

In front of this conception, Edmund Husserl (1859 – 1938), begins to elaborate his phenomenology, that tries to explain, with will of rigorous science, how things are given to the conscience. But he does not reduce this analysis to a foundation of science, but rather he deals with how things are presented in everyday life.

For Husserl, things are not presented as a phenomenal manifestation of something unknowable in itself, as in the Kantians, but are intuited by the consciousness as a phenomenon that shows its own essence. Questions such as truth or knowledge no longer require so much a foundation of mathematics or natural science as a rigorous analysis of consciousness . It is this perspective that Heidegger will deepen, going beyond the limits of phenomenology itself.

Heidegger observes, in his questioning of the being, that the categories of knowledge, which for the neo-Kantians are given in a transcendental, objective and pure structure, identical for all the people, are given in reality in the individual, existential and temporary life, that is to say in the life of the conscience. How do these two apparently contradictory fields converge in the conscience ?

Deepening in Husserl’s intuition, he carries out in Being and Time an existential analysis of the human being as he asks himself about being. That is to say, an analysis of Dasein. Let’s see it in a little more detail.

According to Heidegger, the question of being has been asked throughout the history of philosophy under the prejudice of presence. That is to say, already from Parmenides to the philosophers of the 20th century, the being has been understood as something that is given as present in its totality, as objective and complete. The paradigm of this way of thinking is found in the idea of God as an omnipresent being.
With his existential analysis of the Dasein, Heidegger tries to inaugurate a new way of understanding the being and the metaphysics .

To begin his analysis, as we have seen, Heidegger stops wondering about being from the theoretical point of view of the sciences and goes on to an analysis of consciousness in its everyday life. Thus he intends to analyze the question of being in the most general way possible, without privileging any concrete way of facing reality.

What Heidegger observes now is that, in front of the conception of the being as objective presence already given, when focusing the analysis from the general point of view that he proposes in his analysis, the being appears as possibility. On the contrary of what happens with things, the human being, being a Dasein, is possibility before reality . It is insofar as it can be. The Dasein is thus, in its most fundamental form a project.

This power to be as a project is, moreover, always already given in a context of things and people. The human being does not exist in a pure and isolated way but from the first moment he tries to understand and self-determine himself he is already in a relationship.

It is here that we can clearly see the meaning of the word Dasein: to be or to be here. It is about the human being as inserted in a context of things and people, a world, which precedes him and which conditions his existence, his transcendence to himself as a project.

The being of things is not thus to be present, but to belong to a totality of meanings which is the world. The things mean each other and this meaning depends on the projection of the Dasein. That is to say, the Dasein with its project fundamentally the world in which the individual things are given in turn.

We see that the Dasein is not a tabula rasa, but from the first moment in which it tries to understand itself in its project, it already has a pre-comprehension of the world provided by its context. This is the structure of the circle of understanding, or hermeneutic circle , according to which knowledge always starts from a presupposition about the things that guide your question. To know is to go deeper into those questions.

Therefore, being is given in a process of knowledge that never ends and is never totally present. It is this in turn the existential structure of the Dasein, of the human being as being in the world that exists in constant transcendence of itself. The Dasein, to the being time, is always a being power, and never is complete.

This pre-understanding is not only theoretical, but also includes an affective disposition. Things are always accompanied by sensations such as joy or boredom , being such affective dispositions part of the process of knowledge. We see here the consequences of the passage of objective knowledge through the universal and objective structures to the heideggerian point of view that bases knowledge on the temporal, existential and daily structure of consciousness.

Cure and be for death

Two essential elements of Dasein remain to be seen: the cure and the possibility of death .

For Heidegger, the truth of knowledge is given in the cure, which is a taking of responsibility for things. This means that in an existence carried out through a determined project things will be presented in a more authentic way.

The German philosopher also claims that the Dasein is a being for death. Death is indeed that possibility which we know for sure will be realized, but which we never experience as realized. As long as such impossibility of every possibility, it allows the possibilities to be such: if we did not die, time would be meaningless, we would not have to choose between possibilities nor could we exist as a project, since it would be possible to realize all possibilities.