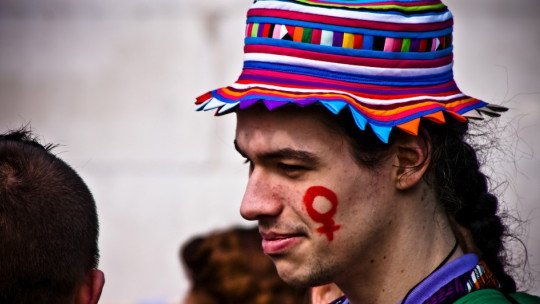 In the world of social science and cognitive psychology, biases related to sexist attitudes generate much interest. However, there are many terms around this topic that generate confusion in many people who do not have a background in this field.

The terms “feminism” and “feminism”, for example, are two labels that are often confused , as if they were synonyms.

However, the meaning of what feminism has been historically and what has recently been given to the word feminism is very different. Let’s see where the confusion comes from.

We will first give a rough definition of each of these words and then go into detail about how they differ.

Feminism is a set of social movements whose objectives are based on the visibility and empowerment of women and the questioning of gender roles in which the feminine is considered to be eclipsed by the masculine . Consequently, feminism is a social phenomenon linked to a certain historical context, and it transforms itself over the years as history progresses. It focuses on demands related to both legislation and the customs and habits of a society that still carries with it macho attitudes due to centuries of domination over women.

In theory, hembrism is a neologism used to refer to an attitude that legitimizes contempt and attacks on men just because they are men. It is usually equated to the concept of misandry , which means “hatred towards men”, although the latter term has more to do with an attitude that can be externalized in a more direct way or not, while the former is something observable. Therefore, the idea of hembrism has to do with sexism.

The differences between feminism and feminism

Let’s now look at the differences between the two concepts

As we have seen, feminism is fundamentally a product of history, and its reason for being has to do with an inequality that has historically harmed women. That means that feminism is not simply the propensity of a person to think and act in a certain way.

Feminism is not something that is found in individuals, but in groups of people; it has to do with a collective phenomenon: the social movements that shape feminism. It exists as a response to an element that cannot be defined as individual either , but that is conceived as something systemic: the patriarchy.

Hembrism, on the other hand, would be an individual attitude, because it does not derive from a cultural or legal system of inequality in which the people who have had more power have historically been women.

In a way, feminism is more a psychological phenomenon than a social one , while with feminism the opposite is true. This, however, is only half true, because everything social has repercussions on the psychological and vice versa. Nevertheless, this distinction between these two spheres (the social and the individual) serves to understand them better, since in practice they coexist and depend on each other.

Product of history vs. psychological bias

Feminism can be given a date of birth, which normally coincides with the age of the Enlightenment , because it is a social and intellectual movement. This means that the idea that feminist people can exist, for example, in Ancient Greece, is technically incorrect.

Hembrism, on the other hand, can theoretically be found at any time in the past, because it only depends on whether there is a person who, for one reason or another, rejects or hates men. Its existence does not depend on a dynamic of events that have been generating a chain effect throughout history, but it appears in a more spontaneous way.

Feminism does not propose measures to subtract well-being and power indefinitely from men simply because they are men, something that machismo does through justifications based on “the natural order of things”, tradition, etc. Even the measures of positive discrimination that a part of feminism defends are conceived as a provisional arrangement , to allow, for example, that women can accede to management positions in equal conditions to men.

Hembrism, on the other hand, would be hatred of men simply because they are men, that is, indefinitely and independently of the context. It is, therefore, an essentialist bias , because it does not depend on what a person does nor on the conditions in which he relates to others, but it is his condition of man that produces rejection because of sexism.

Controversies around the idea of feminism

The very use of the word “hembrism” has been widely criticized, as it is understood to be a word born to harm the social movement. Somehow, it is assumed that its use can only have negative consequences for egalitarian movements and positive ones for conservative and traditionalist positions.

However, this does not have to be so and, in fact, the fear that from some feminist circles is shown before the possibility of approaching the meaning of the word “hembrism” can make that this is identified with feminism because it is considered a taboo , something of which is not spoken and that becomes invisible because it effectively attacks the foundations of the movement.

For example, the position of assuming hembrism as a taboo comes to absurdities such as considering that “hembrism does not exist”, something that is evidently false. Hembrism does not cease to exist because it is not comparable to male chauvinism, in the same way that contempt for football supporters exists despite the fact that there is no evidence of a political and cultural system that discriminates against them.