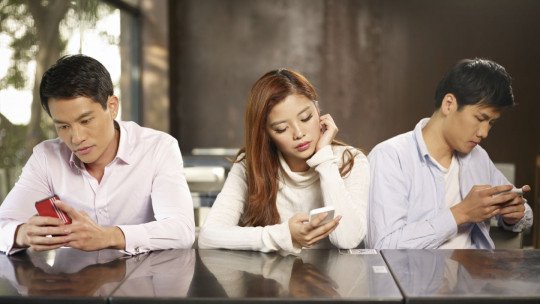 Since the smartphone boom in the mid-1990s, the presence of these devices in our lives has only grown exponentially.

The percentage of inhabitants of our planet who use a mobile phone is 51% , that is, no less than 3,790 million people. This percentage of smartphone users amounts, for example, to 80% of the adult population in Spain. In terms of social use of the phone, 42% access networks such as Facebook, WhatsApp Twitter or Instagram on a regular basis in order to interact with others. In light of this data (Fernandez, 2016), we can assume that the way we relate to each other is in a process of constant change.

“With their constant beeps, bells, vibrations and whistles, the phones are like a whimsical child who won’t behave until he or she gets what they want. The desire of our phones is to be constantly attended.” (Roberts and David (2016)

What is phubbing and why is it becoming normal?

Due to the need to describe a social phenomenon that did not exist many years ago, the Australian dictionary Macquaire developed during 2012 a campaign around the world dedicated to familiarize people with the word phubbing (Pathak, 2013). A combination of the words phone and snubbing , this term refers to the fact that, in a social gathering, you ignore someone by paying attention to the mobile phone instead of talking to that person face to face .

This behavior, certainly harmful in any social interaction, is becoming commonplace. Varoth Chotpitayasunondh and Karen Douglas (2016), have recently investigated the psychological causes and consequences of this behaviour. These authors discovered that, as could be intuitively predicted , one of the causes that leads us to deliberately ignore the person we are with is mobile phone addiction .

Among the factors that predict addiction to the mobile phone, and therefore phubbing, is addiction to the Internet and its excessive use, which is closely related to other non-chemical addictions such as gambling.

As a predictor of Internet and smartphone addiction, these University of Kent researchers found that an influential factor was the user’s ability to control himself . The lower the level of self-control, the higher the probability of Internet and smartphone addiction and therefore the higher the probability of phubbing . A final important factor that was identified was the fear and concern of being left out of the events, occurrences and conversations that are taking place in the social circle, causing this to lead to problematic use of the mobile phone.

Phubbing behavior, the authors argue, is becoming normal and acceptable because of what is conceptualized in social psychology as “reciprocity. Repeatedly ignoring other people while looking for a cell phone causes others, intentionally or unintentionally, to return this social action.

Although it is not pleasant for anyone to be ignored, roles are often exchanged during different social interactions , being “ignorant” at some times and ignored at others. Because social learning is basic in the acquisition of new behaviours, this exchange, according to the researchers, leads us to assume the false consensus that this way of acting is something acceptable and even normal. The authors confirmed this by finding that those people who were most ignorant and those who were most often ignored saw these behaviors as more socially acceptable.

How does phubbing affect our close relationships?

The mere (visible) presence of a mobile phone on the table can reduce the perception of closeness, trust and quality of conversation between two people, this effect being more pronounced when discussing emotionally relevant issues (Przybylski & Weinstein, 2013).

About 70% of the participants in a study on the influence of technologies on relationships (McDaniel and Coyne, 2016), stated that computers or smartphones interfered in some way with their cohabitation . The more frequently technologies interfere, the greater the impact on their well-being (less satisfaction with the relationship, with life in general and more depressive symptoms).

Therefore, this phubbing behavior is not reduced to sporadic encounters between friends, co-workers or classmates, etc. but can directly affect the structure of our most intimate relationships and have some influence on our quality of life. James Roberts and Meredith David (2016), from Baylor University, decided to study the effects of partner phubbing or p-phubbing , that is, the interruptions to look at the mobile phone during a conversation while in the presence of the partner. Due to the widespread presence of these smart phones, as mentioned above, frequent interruptions are highly likely in people who share a great deal of time, such as a married couple or any couple.

Due to the needs of human attachment, these authors hypothesize that for a quality relationship the mere presence of the couple is not enough, but that certain affective exchanges must take place and be reciprocal. These exchanges, as the use and presence of smart phones advances, may be diminished. Therefore, due to the interruptions caused by p-phubbing, the needs for attachment and attention may not be satisfied in the same way that they are without the interference of certain technologies.

With regard to the results of the study by James Roberts and Meredith David (2016), as predicted , the greater the frequency of phubbing, the greater the number of conflicts related to mobile phone use .

Considering that, currently, the percentage of divorces with respect to marriages is 50% (without taking into account the separations of the rest of the couples), the empirical evidence provided by this type of studies should be useful to make us aware of our acts.

This awareness does not imply that in order to live a fruitful couple’s relationship we should isolate ourselves from the benefits that new technologies bring, but to make a correct use of them. Just as a person can subjugate his partner by exercising excessive control over him and preventing him from going to meetings with his friends, a mobile phone (something inert) can deprive us of moments with our loved ones. Taking advantage of our “powerful” frontal lobe, we must take control of our relationships and be able to guide our lives towards the best possible quality of life. There is little point in living in an online world if we are disconnected from what is truly important.