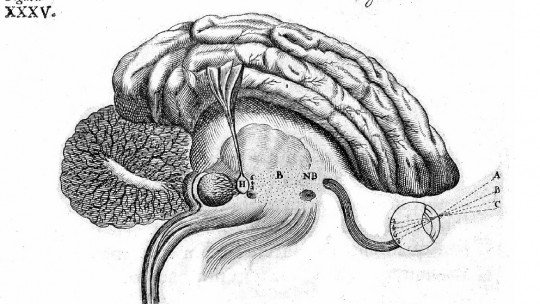 Although philosophers such as Aristotle thought that the brain served only to cool the blood, thus claiming that the mind resided in the heart, figures such as Hippocrates and Galen offered clearer views on the importance of the brain on behavior.

Galen, a Greek physician (129 – 200 AD) would consider the brain such an important organ that he went so far as to dissect cows, sheep, pigs, cats, and dogs just to study it.

Physiological Psychology after the Scientific Revolution

Closer to the timeline, in the 17th and 18th centuries, the intellectual positions related to physics and mathematics maintained a central axis in the study of behavior . A young René Descartes, fascinated by the hidden mechanisms that made the statues in the Royal Gardens in western Paris move, outlined his theory on the functioning of the body around these technological devices.

In his mind, the pressurized water that made the moving statues move was replaced by the cerebrospinal fluid, the cylinders by muscles, and the valve by the pineal gland. This would cause more men of his time to postulate new models around the functioning of the human body.

The Italian physiologist Luigi Galvani gave a blow to the way in which the system proposed by Descartes had been understood, when he discovered that stimulating the nerve of a frog caused the contraction of the muscle to which it was attached.

He observed that the brain does not inflate the muscles by sending fluid under pressure through the nerves ; the functioning of the nervous system was not so simple and mechanical. This was a vital contribution to the state of knowledge regarding the physiology of behaviour.

Johannes Müller was another key figure in the birth of physiological psychology; his work in experimenting by removing and isolating animal organs on which he performed a thorough analysis of their responses when exposed to various chemicals would go so far as to explain that nerves are not only motors, but also parts of a system of sensors .

His greatest contribution was precisely his doctrine of specific nervous energies: the quality of sensation does not depend on the stimulus affecting the senses but on the type of nerve fibre involved in perception.

An example of this is that electrical stimuli applied to the optic nerves will only cause light sensations.

Müller’s mode was also shared by Pierre Flourens and Paul Broca , who experimented directly on the organ through different techniques.

Flourens, a 19th-century French physiologist who is considered the founder of experimental brain science, examined the behavior of various animals after removing various parts of the brain and conclusively showed that those parts of the organ removed were responsible for the affected function; thus, an animal whose cerebellum is removed will have problems with motor coordination.

Years later, Paul Broca used principles similar to those of Flourens , but with specific patients, those with speech problems. Thus he discovered in postmortem studies that most of his patients (except one) had damage to the third left frontal gyrus.

Broca reported 25 cases with these alterations that had affected the left hemisphere. Broca’s successes were a great impetus for other people like Wernicke to study the neuroanatomical bases related to language , and to maintain the contributions related to the study of behavior. Thanks to these contributions, among other things, we know the logic behind aphasias.

Currently, physiological psychologists are based on experimentation, using both generalization and reduction to explain behavior.

Physiological Psychology has a multidisciplinary character and is strengthened by sources such as medicine, biology, chemistry, etc . Finally, mention should also be made of contributions such as those of Ramón y Cajal, Francisco Varela, Mark Rosenzweig, Arnold Leiman, among others. Together, they created the fundamental bases for the development of this science.