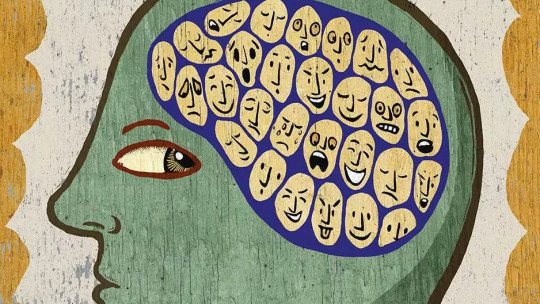 The word psychosis probably rings a bell with a large majority of the population, or at least those with knowledge of psychology and psychiatry. It is a term that, although born about two centuries ago, is still used today when referring to certain mental disorders. Many people know that it is related to schizophrenia and other severe mental disorders.

So, what is psychosis? In this article we will make a brief comment on this.

Psychosis is understood as the set of mental alterations that generate in the person who suffers them an alteration in the perception of reality, losing contact with it and causing severe difficulties in the functioning of perception, thought and behaviour.

The concept emerged in the psychoanalytic current, appearing in 1841 and starting to become popular from 1845. In fact, in this last year the division of mental disorders into neurosis (of neuropsychological origin, in which the subject has difficulty in adapting to reality but without denying it) and psychosis (psychiatric, in which a break with reality and a possible generation of a new one occurs) would become popular and widespread.

The most frequent and predominant symptoms that someone with some type of psychosis usually presents are hallucinations or perceptions of stimuli that do not exist in reality , which can affect any sensory modality, and delusions (whether or not these are an attempt to explain these hallucinations).

It is also common for there to be an alteration in the ability to coordinate and organize thoughts, words and actions, losing the ability to make logical associations. Strange and disorganized behaviour takes place , and on many occasions the thread of the discourse is lost. It is common to have difficulties in concentrating, as well as the presence of alterations in mood. Agitation and panic, or on the contrary total immobility, is not a strange phenomenon either.

Another aspect to take into account is that in most psychoses and psychotic experiences the subject is not aware of being suffering from an alteration: obviously he is aware of what he perceives, but generally he does not see it initially as something self-generated but as something that is really happening. And they are not mere imaginations: the subject really perceives something (he hears a voice, notices insects running around his body…), simply these perceptions do not correspond to real stimuli.

These alterations are usually linked to the suffering of a mental disorder, although may also arise from the suffering of a brain lesion , an organic pathology (a tumour or infection for example) or the consumption of substances (whether drugs or medicines). But sometimes we can also present some kind of psychotic symptom without the need to suffer from a specific problem or be intoxicated: there are some hallucinations that arise in periods of altered consciousness, or it is possible that starvation or lack of sleep can generate them.

The causes of psychosis

Psychoses are complex alterations, which throughout history have tried to be explained in multiple ways and by different theoretical currents. To date the causes of psychosis remain largely unknown , and the explanations given may vary greatly depending on the psychotic disorder itself.

Currently the most widespread hypothesis, of cognitive-behavioral origin, is that of diathesis-stress , in which it is considered that psychotic disorders are the product of the interaction of vital stressors and biological vulnerability generated by genetic inheritance and/or problems derived from brain functioning (such as poor neuronal migration or the presence of physiological alterations).

However, it should be borne in mind that different frameworks and currents of thought have offered different explanations. Since Freudian psychoanalysis, for example, psychosis has been presented as a denial and substitution of reality generated by the absence of the capacity for primary repression, specifying the subject of this deformation of reality in order to subsist.

Another current that has tried to offer an explanation is the humanist one, which proposes, for example, with the model of a self-esteem map that the nucleus of the disorder is found in the anguish and the vulnerability to the anti-hazards (defeats, failures and situations that make the subject feel ashamed and despise himself), that end up causing the subject to deceive himself to protect himself and little by little he is moving away from reality. However, both this model and the one based on psychoanalysis are not accepted by the scientific community.

Psychosis is a generic term that refers to the overall functioning of this type of disorder. But in reality there are a large number of different psychopathologies that fall into this category . Likewise, some disorders that were originally identified as psychotic have subsequently been separated from this concept. One example is bipolar disorder, formerly called manic-depressive psychosis. The following are some of the major psychotic disorders.

The best known and prototypical psychotic disorder, schizophrenia is a disorder in which hallucinations, delusions and language disorders often occur . Disorganized behavior, catatonia, or negative symptoms such as impaired thinking and judgment may also appear. It usually occurs in the form of outbreaks and creates a great deal of difficulty for the sufferer. The symptoms last for at least six months and may eventually lead to cognitive impairment.

Another of the great mental disorders of a psychotic type, chronic delirious disorder is characterized by the existence of alterations in the content of thought , with strange beliefs that do not conform to reality that remain fixed despite the evidence to the contrary. In general, with the exception of that which is linked to the content of his delirium, the subject acts normally and does not present other difficulties. Beliefs may be more or less systematized, and the subject often considers that the evidence supports his beliefs and ignores those elements that contradict them.

It is a psychotic-type disorder that shares most of the symptoms with schizophrenia, except for the fact that the duration of its symptoms is more than one month but less than six and does not cause deterioration.

Brief appearance of psychotic symptoms as a reaction to a stressful and traumatic phenomenon.

6. Psychotic disorder due to medical illness

Some medical illnesses may end up generating psychotic symptoms due to the involvement of nerves or the brain . Dementias, tumours, autoimmune problems and metabolic disorders may be the origin of an organic psychosis.

Drugs can also generate psychotic experiences, both at the time of consumption and during intoxication or as a result of the abstinence syndrome in dependent subjects.

It is a psychotic disorder similar to schizophrenia and schizophreniform disorder , with the difference that in this case it lasts less than a month.

9. Occasional symptom in other disorders

It must be taken into account that, in addition to the actual psychotic disorders, many other psychopathologies can be studied with some psychotic elements . This is what happens with depression or bipolar disorder, in which hallucinations and psychotic phenomena may occasionally appear.