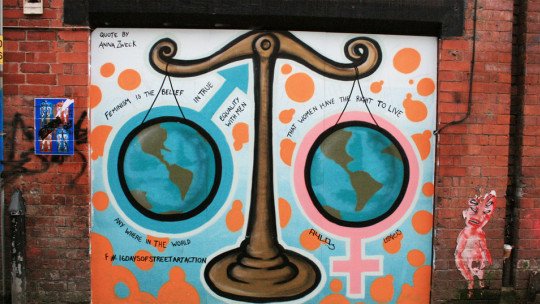 In the article on types of feminism we already saw that it is quite complicated to talk about feminism as an ideological or political current with common objectives and ideology; in the end, because of something that talks about feminisms, emphasizing their plurality.

However, the fact that within this set of movements there are many very different trends does not mean that they all have the same weight. Radical feminism, also known for its shortened form “radfem” , for example, is one of the most widespread and popularized. Let’s see what it consists of.

The emergence of radical feminism

The radfem current appeared in the context of the second wave of feminism , initiated in the 1970s in Western countries. Until then, the feminist movements belonging to the first wave had focused on denouncing sexist discrimination expressed directly in laws and institutional rules; however, this new generation of feminists understood that the oppression of women was not limited to formal sexism and embodied in rules, but permeated all aspects of life.

In other words, while the first feminists recognized institutionalized sexism as a fundamental problem, the second wave of feminism pointed out that the problem was of a much more complex and profound nature than that. Sexism was not only in laws, but also in power relations, in informal treatment and, furthermore, in the material disadvantages that women faced as a result of centuries of subjugation to men.

The problem, then, was strongly rooted both in the material conditions of survival (men with much more property and more capacity to hire, for example) and in the minds (popularization of the idea that women should please men, etc.). To end this system of oppression, called patriarchy , radical feminism was born: the one that aimed at going to the root of sexism.

The characteristics of ideology

Now… what exactly is radical feminism? Fundamentally, it is a broad current of feminism that contains other smaller variants, and its basic characteristics are the following.

The liberal feminism that defined the first members of feminisms understands that the discrimination problems that affect women do it in an individual way: a concrete situation affects a concrete woman , who looks for those others that have passed through the same to, together, exert pressure from their individualism.

In radical feminism, however, inequality by sex and gender is a collective problem that must be addressed collectively. This means that great importance is given to the need to weave networks of solidarity that go beyond oneself. This is a characteristic born from the influence of Marxism and that can be noticed, for example, in the way in which the problems are not emphasized in concrete people, but in the social phenomena that are believed to perpetuate certain actions and attitudes.

For example, in the case of the appearance of underdressed women in television products, it is very common to blame the actress, singer or presenter in question.

However, radical feminism underlines the need to wonder why the woman’s body is constantly exploited as if it were just another audience tool, something that happens less frequently with men. Even if the women who appear with little clothing get money for it, the people who benefit most from this transaction are the top managers of the chain, among whom female representation is scarce.

In short, there is constant talk not of individual decisions, but of that which creates pronounced patterns of inequality: men do not need to use their appearance to gain notoriety, but in women it is more difficult and, in any case, one will never come to have real power over what happens.

2. The private is political

From the perspective of liberal feminism, oppression is coercive, that is, it is expressed only through direct imposition and violence. For example, the fact that by law many women could not start working without their husband’s permission if they did not want to commit a crime was a sign of what this movement rejected.

For radical feminism, however, sexism is not only expressed through the clear impositions and directly expressed as such, but it is also in the customs, the ideals of beauty, etc. That is why in this current the private is analyzed as a political fact, since it is understood that in this area the dynamics of relationships that oppress women are also reproduced.

For example, if all the big Hollywood mega-producers make films in which women always have the same psychological profile and the same plot role as “damsels in distress” in love who need the hero’s help, this will be seen as a political problem by radical feminism, even though it is expressed through the private ownership of the big companies that offer their products.

3. A historical approach based on patriarchy

In radical feminism, patriarchy, which is theoretically formulated as the root of sexism, is not only composed of laws, but also of the cultural and material heritage that has been bequeathed by previous generations.

Unlike liberal feminism, which does not take into account historical precedents and limits itself to pointing out injustices in the here and now, radical feminism analyses the problem by understanding it as the product of a system of domination (patriarchy) that is reproduced century after century . This is another of the influences that Marxism has had on this current, although the psychoanalysis used to study the anthropological foundations of oppression has also been an element that has favored this viewpoint.

In radical feminism it is considered that the fact of being a man or a woman irremediably conditions the role that one has in the political debate. That is why this current emphasizes the need to form non-mixed groups composed only by women so that the feminist conscience is worked and ways are found to analyze the problems that are not affected by the masculine point of view.

The idea of finding new ways of expressing femininity that do not start from the male point of view is highly emphasized especially by the feminism of difference, one of the main variants included within the radfem.