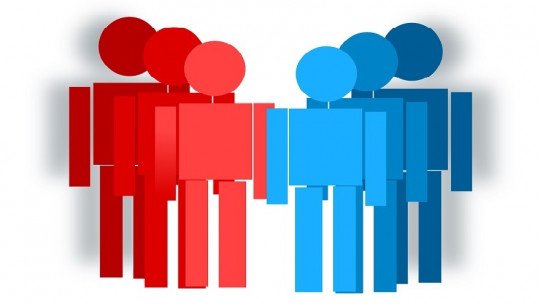 When we gather information about the teachings and theories that the so-called Social Psychology has been providing for decades, we can realize that this is a discipline that began to be recognized and developed as such at the beginning of the 20th century in the United States.

Social psychology is a branch of psychology that analyses processes of a psychological nature that influence the way in which a society functions, as well as the way in which social interactions are carried out . In short, it is the social processes that modulate the personality and characteristics of each person.

Social psychology is also often described as the science that inquires about social phenomena, trying to unravel the laws and principles that govern the coexistence of humans. Thus, this branch of psychology is responsible for investigating the various social organizations, trying to extract patterns of behavior of people who make up the group, their roles and the set of situations that modulate their behavior.

What exactly does social psychology study?

The object of study of social psychology is, as we have said, the influence of social relations on the behaviour and mental states of people. To this effect, one of the key theories in this discipline is that of symbolic interactionism . One of its predecessors, George H. Mead, developed a deep study on language, gestures and behaviour, as products of the interpersonal relationships that allow life in community and, specifically, their personal interactions face to face.

Obviously, in our societies there are organizations and institutions built around certain socio-cultural conditions that are a product of the interaction between people. This being so, it is not difficult to imagine that there is a collective consciousness that facilitates the understanding of these social articulations.

Social psychology, then, studies the observable psychological and social processes, which helps us to understand how individuals act when they are part of groups or societies . Social psychology also encompasses the study of personal attitudes and the (bidirectional) influence with social thinking.

And, of course, another element that social psychology takes into account is the historical context in which psychological events occur, since behavior always takes place on a series of material and symbolic precedents that influence what we do.

Let’s meet some of the most prominent representatives of this field of psychology. One of the main representatives of social psychology for its relevance in the emergence of this discipline, is the French sociologist Auguste Comte (1798 – 1857). This researcher was the pioneer in proposing concepts such as positive morality and wondering about several aspects that related the role of the subject in the self of a society and culture , as well as not abandoning his curiosity for the psychobiological foundations that also influence human behavior. Another of the pioneering authors of the discipline of social psychology was the German philosopher, economist and sociologist Karl Marx (1818 – 1883). This fruitful intellectual began to suggest certain concepts and elements that would serve, after his death, to establish the foundations of social psychology . For example, he was the precursor of a line of research that related cultural, institutional, religious, material and technical influences on the psychology of the individual.

Among Karl Marx’s contributions to the beginnings of Social Psychology, we find the fact of emphasizing that what we think and feel is historically constructed, it does not arise from our interior in an isolated way.

To the two intellectuals mentioned above, we can add the enormous influence of those who, this time, do consider themselves the founding fathers of social psychology . Three American psychologists: George Mead , Floyd Allport and Kurt Lewin . The last of them, Kurt Lewin (in the image), is considered the architect of the so-called Modern Social Psychology , a school that eventually built the foundations on which Gestalt Psychology would be constructed. He is also the author of Field Theory , which explains that individual variations of behavior in relation to the norm are strongly conditioned by the struggle between the subjective perceptions of the individual and the psychological environment in which he finds himself.

Thus, Lewin concludes that human behavior can only be cognizable within its own environment, in its surroundings . Behavior, then, must be understood as a myriad of interdependent variables.

Since social psychology is a very broad sub-discipline that addresses multiple processes of interaction between the individual and society, it is not surprising that many psychological schools have based a large part of their teachings and their developments on it.

For example, we can find different approaches in psychoanalysis, behaviorism, postmodern psychology and group psychology.

The psychoanalysis , whose maximum representative is Sigmund Freud, is one of the most traditional schools. Psychoanalysis employs some principles of social psychology as the discipline that inquires into the collective drives and repressions that emerge from within the unconscious of each person to later influence the collective and condition the social.

However, it must be taken into account that psychoanalysis is not part of social psychology nor is it based on the epistemology of scientific psychology in general.

On the other hand, behaviorism conceives social psychology insofar as it provides us with data on social influence. Behaviorism focuses on observing and analyzing individual behavior, taking into account the influence of the social and cultural environment .

The postmodern psychology tries to analyse through social psychology those elements that influence the diversification and fragmentation of society .

From the approach of group psychology , every collective forms a unit of analysis with its own particular idiosyncrasy. Consequently, social psychology attempts to carry out a study that balances the social and the depersonalised and the subjective and the particular .

The most well-known experiments, research and studies in the field of social psychology are the following:

In this study it was shown that violence and aggression are learned through imitation . It was one of the pioneering studies in this field, and has been repeated to assess the extent to which exposure to violent content in the media influences the aggressive behaviour of viewers.

You can learn more about this experiment by accessing this post:

One of the most controversial and famous studies in social psychology consisted of a simulated exercise in which university students acquired for a few days the role of inmates and guards in an artificial prison. Zimbardo demonstrated that, under certain circumstances, people would assume their role to the point of acting unethically . It is a classic study on the power of the social situation.

Discover all the details of this experiment by reading this article:

Other notable experiments such as Solomon Asch’s experiment, Sherif’s Cave of Thieves experiment or Milgram’s experiment are also of crucial importance in the field of social psychology.

In an article, we explain these (and other) experiments in detail. You can consult it: