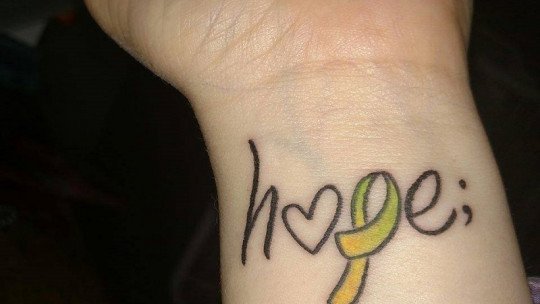 Thanks to Facebook I see daily web pages with images, messages and links that I like to browse . Some of these contents are funny pictures, videos of people doing incredible things or articles of people who want to transmit their concerns. This week I read something about the meaning of the semicolon in tattoos. I didn’t know anything about this “fashion” and started reading.

Say with Project SemiColon , a website of a girl named Amy whose father committed suicide when she was young, and now she dedicates her time to give birth to the feelings and thoughts related to this experience, an experience in which many people suffer the tragic consequences and carry them with them throughout their lives.

A project to express feelings

A semicolon serves to separate two independent statements that have a very close semantic relationship. It is a longer pause than a simple comma, and shorter than a period.

What does this symbol have to do with suicide?

Amy Bleuel’s father was suffering so much that he decided to end it all by taking the pain with him. Amy, although feeling the pain and the sorrow of his death decided to pay tribute to him with this project , focusing all her attention and strength on transmitting her message of recognition to those people, who once decided to end his life and did not do so finally. To these people he throws a hopeful voice to continue living, to overcome the struggle of depression and to make it visible, since the taboo on suicide still exists today .

The more a fact is hidden, the more difficult it is to detect it and avoid it in time, the more its signs are blurred and for professionals and family members it is very difficult to help that person who feels nothing but suffering, sadness and despair.

In Spain, according to data from INE ( Instituto Nacional de Estadística ) around 3,500 people commit suicide each year . How is it possible that nobody talks about it, neither in the media nor in the streets?

We are afraid to ask, to explain, to give light to this state of pain that for many is inconceivable. But that it exists. Even today, even mental disorders are treated as something dark, secret and shameful. The problems associated with suicide are also hidden and concealed by the stigma even though these issues must always be exposed with responsibility, respect and clarity, but not hidden.

A positive message towards recognizing and fighting depression and suicide

This girl and her team are looking for the same thing: from love and humility they want to shed some light on what all those who left behind left behind, and they want to offer a space of expression, knowledge and support to all those who are still struggling to get out of that depression.

In this website you will not find psychologists or doctors, it is a place of declaration of intentions, it seeks to transmit its philosophy through the creation of positive experiences, events and collaborations in relation to this painful fact with an optimistic and real vision.

They have a blog where they express their experiences with groups of volunteers in different neighbourhoods, where they offer talks and visibility to the symptoms of depression, the feeling of loss, the pain, the thousand and one forms that anxiety takes ( autolysis ) . They are critical of what they see and generous in explaining what they feel, they bring their tools to anyone who may be feeling bad. They offer great emotional support .