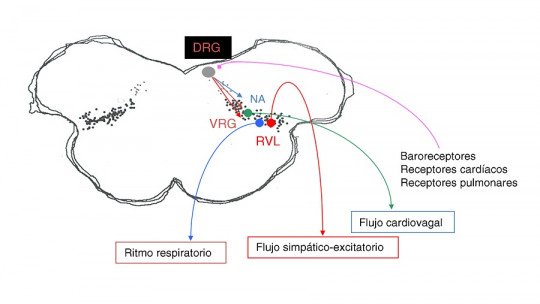 As a general rule, in the resting state an adult human being breathes at a rate of between twelve and eighteen breaths per minute. Breathing is fundamental to our survival, a process that we carry out in a semi-conscious way continuously throughout our lives.

But who makes sure that we do, and what part of our body causes us to carry out this basic function? The answer can be found in the spinal cord, specifically in the preBötzinger complex .

The preBötzinger complex is a set or network of neurons located in the spinal cord or medulla oblongata , specifically in its ventromedial part, forming part of the brain stem. This neuronal network appears in both hemispheres, being a bilateral and symmetrical structure. It is connected to the spinal cord, and as we have mentioned, it is fundamental for the generation and maintenance of respiratory rhythm.

It is a recently located structure, specifically in 1991, and in it different types of neurons have been found that allow through their interaction the genesis and rhythm of the respiratory cycle. The preBötzinger complexes of both hemispheres seem to function partially independently, although they communicate in order to synchronize.

Although this structure is still little known, various functions of great importance are attributed to it .

The preBötzinger complex is a fundamental element to keep us alive, and its injury can cause death by respiratory depression. Its main function is the generation and management of the respiratory rhythm .

2. Adaptation of breathing to environmental needs

The interaction with other areas of the brain enables the preBötzinger complex to regulate the breathing rhythm according to environmental needs . For example, if we do sport our breathing will be accelerated.

This complex and its connections have been found to be capable of detecting and acting on the oxygen level in the body. For example, if we are asphyxiating it is common for our respiratory rhythm to accelerate , given that the organism seeks to acquire the necessary oxygen to survive.

An unknown mechanism of action

The way in which this structure works is still not totally clear, but through experiments with rodents it has been shown that it has a link with the receptor of the neurokinin-1 hormone and with the action of neurotransmitters.

The existence of “pacemaker” neurons has been observed (similar to what happens with heart rhythm), some dependent on voltage and others independent of it. Their exact functioning is still debated, although it is speculated that the voltage-dependent ones are the most linked to the generation of the respiratory rhythm by allowing the emission of action potentials through sodium uptake.

In any case the hypothesis with the greatest empirical support is that it is the action of the set of neurons and their interaction that allows the rhythm to be generated , being the result of the interaction and not of the activity of a single type of neuron.

Much more research is needed to understand the exact functioning of this region, and this is a field of study that needs to be further developed.

With regard to the neurotransmitters with the greatest effect in this area, it has been perceived that glutamatergic activity is essential for the pre-Bötzinger complex to act by allowing breathing. Specifically, it is the activity of the AMPA receptors that plays the most important role, although some participation of NMDA receptors is also observed in the process (despite the fact that in some studies the modification of NMDA did not generate real changes and does not seem to be essential). Their inhibition may cause the cessation of the respiratory rhythm, while the use of agonists causes an increase in this .

When it comes to reducing the rate of breathing, the neurotransmitters that appear to act most effectively are GABA and glycine.

In addition to the above, there are other neurotransmitters that influence the respiratory rhythm through this structure. Although they do not participate directly in the genesis of respiratory rhythm, they do modulate it. Examples of these are serotonin, adenosine triphosphate or ATP, substance P, somatostatin, noradrenalin, opioids and acetylcholine. This is why many substances and drugs cause an alteration in the respiratory rhythm.

One aspect to consider is that emotions also have an important effect on the respiratory rhythm, due to the effect on this area of the neurotransmitters secreted. For example, in the case of experiencing nervousness or anxiety, an increase in the breathing rhythm is observed, while in the case of despair and depression, it tends to slow down.

Effects of injury to this area

Although the preBötzinger complex is not the only element involved in respiratory control, it is currently considered the main element governing it. Alterations in this area can cause consequences of varying degrees, such as increased or depressed breathing. And this may come from congenital injuries, trauma, cardiovascular accidents or administration of psychoactive substances. In extreme cases it can lead to the death of the patient.

Post-mortem analysis of people with dementia with Lewy bodies or atrophy usually shows a decrease in the population of neurons reactive to the aforementioned neurokinin-1, which may explain the presence of respiratory disorders in these diseases.