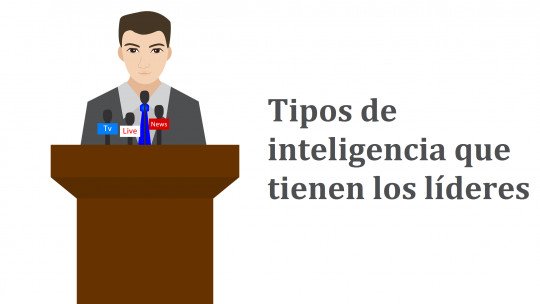 Leadership ability is a highly valued competence in today’s society . In a world as competitive as ours, it is essential to be able to guide and motivate others towards the achievement of certain objectives, to make them see that the common objectives are compatible with one’s own and the need to adhere to and fulfil them.

In this aspect, a high level of intelligence would seem to be of great use in representing the leader’s role, since it is easy to assume that the smarter the person is the more effectively he or she performs the leader’s role. But is this really the case?

Important intelligence in the leader

Logic and data obtained through various studies dictate that general intelligence (measured by IQ) is useful when establishing leadership, since a high level of intelligence allows for a better situational analysis and consideration of alternatives .

However, this relationship between intelligence and efficient leadership has been found to be correlated with a small to moderate one. On the contrary, it is relatively frequent that those who are considered to be intellectual geniuses do not turn out to be good leaders. This is due to the fact that having high intellectual skills does not guarantee that in critical situations one has the capacity to overcome and know how to lead the group.

In fact, sometimes a greater intellectual capacity can produce counterproductive results , producing an ineffective leadership that ends up being ignored, in the case of situations in which the leader has much more capacity than the subordinates.

This is partly due to the emotional distance created by the difference between abilities as well as the fact that since intelligence is a general construct that refers to a set of abilities, it does not have to be similar to the set of skills needed to lead. For example, having a high IQ does not imply the ability to motivate and treat people under your charge. What really implies greater effectiveness in leadership is the leader’s sense of competence and experience.

Studies carried out by various authors seem to show the existence of different types of leadership within the same group. Apart from these two typologies, depending on how power is exercised, different styles of leadership can be found (one of the most notable being transformational).

Leader focused on meeting targets and production . This is a type of leader that specializes in the task to be carried out, being an expert component in charge of mobilizing the available resources. Although they increase productivity, the perception of the workers towards them is usually negative.

This type of leader may have a very high academic and general intelligence, but is more likely to be poorly accepted by subordinates, so that despite raising productivity in the long run it can also increase unrealized productivity.

This type of leader tends to focus on the employee , achieving the maintenance of a stable and functional network, establishing collaboration strategies between employees and helping to reduce tensions. They minimize unrealized productivity and tend to have more appreciation and information than other types of leaders.

Task-focused leaders are most useful in situations where situational control is very low or very high, while in intermediate situations socio-emotional leaders seem to work best. This differentiation shows that there is no one leadership that is more efficient than another, but that the most suitable type of leadership will depend on the type of activities and the characteristics of the activity , company, objective, leader and staff.

As mentioned above, for leadership to be considered efficient, it is essential to take into account the type of relationship maintained with subordinates, since the leader-subordinate relationship is still an interpersonal one.

A charismatic leader with a high level of emotional intelligence will show a remarkable ability to communicate positively affecting the emotionality of the worker. This capacity allows him/her to collaborate with subordinates to help them make decisions, make them see the actions of each one as necessary and contribute to making them see the need to change attitudes and beliefs based on emotional regulation and empathy.

In spite of all the above, it must be taken into account that the level of intelligence, both social and emotional and general, is an advantage when it comes to establishing clear, effective and efficient leadership.

In short, intelligence has a relevant role in establishing and maintaining positive and functional leadership. Especially relevant in this aspect are social or interpersonal and emotional intelligence .

However, the presence of high intellectual capacities does not imply per se a better leadership, but rather the effectiveness of the leader will depend on many different factors, derived from the leader as well as from the staff, activity and situation, being in fact a better predictor of success the experience of the leader in handling the different situations.