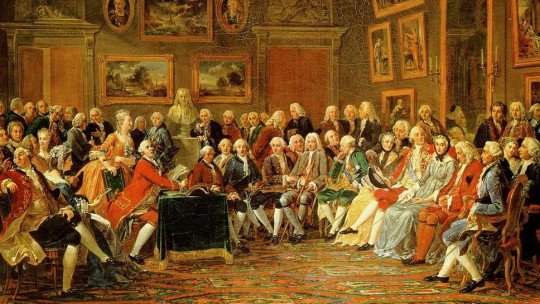 The current western world could not be understood without the movement of the Enlightenment . Its existence laid the foundations for the development of science as we know it, as well as umpulsating values such as rationality and freedom with its optimistic philosophy about the possibilities of transforming society that human beings had. Let’s see what it consisted of.

What was the Enlightenment?

In the mid-seventeenth and early eighteenth centuries, a handful of intellectual bourgeoisie in the heart of Europe decided that they had had enough of the system established by the Old Regime , also called the Absolutist Regime, where all political power and social life was governed by a law that was erected by “divine election”.

Although historians attribute the birth of the Enlightenment to England, it was in France where this thought began to lay its foundations with intellectuals such as Voltaire, Rousseau or Montesquieu among others, founding what would become the encyclopaedia, which would be the great driving force behind the Enlightenment.

Rationalism, the ideological basis of this historical stage

The Enlightenment is a movement of a philosophical, literary, scientific and, finally, political nature . The main mantra was to end the status quo imposed by the archaic and outdated structures of the European kingdoms, basically led by religion and ecclesiastical institutions. This period would also become known as The Age of Enlightenment, the result of the progress and development of new ideas, based mainly on reasoning and individual freedom.

As a synthesis of the previous paragraph, we can say that the Enlightenment had as main characteristics rationalism, belief in the goodness of the human being, laicism and optimism ; the latter from a more humanistic point of view. It ruled the idea of reason over Revelation and theological mandates, firmly opposing traditionalism.

Rationalism will then be the term most heard during the age of the Enlightenment, a metaphor to express the enlightenment that intelligence and logic give off to guide the world full of ignorance. Reason had to be the element by which man had the capacity to understand everything through his intelligence, avoiding superstitions and extraterrestrial theories. “That which is not rational, should be branded as false,” defended the enlightened.

Main characteristics of the movement

Once again, we emphasize reason as the only way to know the truth. Science will influence this premise, where everything that is the object of intellectual discussion or debate must have evidence: we try to avoid the dogmatism typical of religions . It was René Descartes who inspired illustrators with his ideas of “methodical doubt”. Voltaire was another critic of theological fanaticism and of the conservative values that prevented the shaking of ignorance.

Another element to take into account is the ultimate goal of the Age of Enlightenment, which was none other than to help achieve happiness and well-being for citizens, through progress, private property, freedom and equality. To achieve happiness, politics has to be the means to achieve it for the whole society where a social contract between people and rulers rules.

The Illustrated in Spain

As would happen in the rest of the European territories and nations, the Enlightenment would be introduced into the veins of Spanish society gradually and with extreme moderation. It was not that it arrived suddenly and much later than in France or Germany, but the power of the Church made its advance difficult .

In fact, as was also the case in their counterpart countries, the enlightened Spanish were an intellectual minority of the noble class, with property and very often, with part of the clerical sector on their side, which was a novelty. Not all the defenders of the divinity were opposed to the new horde of ideas that was about to be established throughout the old continent, giving rise to the French Revolution of 1789.

As a minority represented by the enlightened authors of Spain, the means they used to get the message across was the creation of public intellectual institutions for everyone to have access to. Academies of Language, History, Science and Medicine were pioneers in revealing the ideas of “the lights” in our territory. Some authors, such as Jovellanos, Guindo Cerezo and even King Carlos III, were great supporters of this movement.