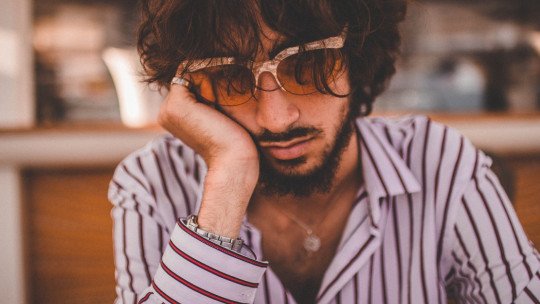 Probably all or almost all of us have at some time felt exhausted and without strength . This state of lack of energy is highly unpleasant and leads to missed opportunities and even disabling.

But not having energy or motivation does not mean that on a cognitive level we cannot worry about what is happening to us and ask ourselves why. **Why am I so tired and not wanting to do anything? **

Throughout this article we will try to establish some of the possible causes that can lead us to such sensations.

Before going into an assessment of what causes extreme tiredness and lack of desire and motivation to do things, it may be useful to make a brief mention of what this tiredness and sense of apathy involves. To begin with, we must take into account that both sensations are deeply linked to our state of energy, as well as being influenced by our mood, biology or the set of experiences we have had.

As far as tiredness is concerned, it is a state of discomfort and weakness which, although generally unappealing, is natural, and which in normative situations has a meaning and an adaptive function. When our body or mind uses up large amounts of energy, the body signals that our resources are nearing exhaustion. This leads us in normal conditions to try to recover strength, either by sleeping, eating or moving away from what is causing us discomfort. This tiredness can turn into asthenia, in which we feel extremely tired and we are unable to act (even in those activities that previously did not cost us).

The desire to do nothing corresponds to the syndrome known as apathy: it is a state of partial or total loss of interest and motivation in which the person ends up being unable to act spontaneously and with initiative. This state usually leads not only to a lack of motivation but also to a decrease in the capacity for concentration and attention (which is usually hindered by rumination) and a loss of capacity to make decisions and reason objectively.

Although it does not necessarily imply sadness or a sense of suffering, it is common for it to occur along with low spirits and hopelessness. To a maximum degree we could be talking about abulia.

Common causes of apathy and asthenia

We may have sometimes asked ourselves the question that gives this article its title, doubting the reasons we may have for being so lacking in energy and motivation to act.

The truth is that the causes will be different for each case, and it is also possible that it is due to an interaction between different elements . However, roughly speaking, some of the main reasons that may lead us to a situation or picture of apathy and asthenia may be the following.

One possible cause of these sensations is the absence of a sufficiently long and good quality rest period. Our body and mind spend energy continuously, so they need to rest in order to repair themselves and gain strength to act.

If we don’t get enough sleep we will be unable to perform and will end up in a state of lack of motivation for action.

Although similar to the previous one, the truth is that a second possible cause of apathy and asthenia is reaching a state of exhaustion, either mental or physical.

The depletion of our energy reserves will cause both sensations . However, it is also possible that even though our energy is low, there is a desire and willingness to act.

The third of the possible causes of fatigue and lack of desire is found in the diet . We have already said that we need to rest, but our body is not a perpetual motive that by itself can keep functioning: it needs nutrients and oxygen so that our cells (including those associated with motivation and control of our energy) can function.

Thus, states of food deficiency or lack of certain nutrients can lead to a state of total depletion and amortization.

Another possible reason why we may feel little motivation and desire to do things has to do precisely with the lack of activity. The fact of not doing anything usually leads a large number of people to a state of frustration or tiredness.

Furthermore, if we are used to an inactive life, the idea of getting reactivated and starting to do activities , sports, work or even going out to enjoy leisure time becomes much more difficult and uphill.

In addition to the above-mentioned anemia, different types of diseases can cause apathy and asthenia.

Among them we can find those linked to the endocrine system, such as hyper/hypothyroidism or diabetes (whether there is hyperglycemia or hypoglycemia). Others are linked to pain or physical energy level, such as fibromyalgia, chronic fatigue or arthritis. Heart, lung (e.g. COPD), liver or kidney problems can also be affected in this way.

6. Feeling of lack of control over what happens

A possible cause of tiredness and lack of desire to do things can come from our perception or beliefs about one’s ability to influence the environment.

People who consider that their actions do not have a meaning or an effect on a certain reality will tend to reduce their behavior and abandon the action, adopting a passive stance. The motivation and the desire to act is lost (because it is believed that nothing will change or will be achieved with it), and the resulting frustration generates a wear on the energy level.

7. Frustration and lack of goals

The absence of illusions, objectives and life goals, or the frustration or impossibility of carrying them out (especially if we are facing a goal or objective that is fundamental or very desirable), is also a common cause of apathy and feelings of low energy and tiredness.

Not knowing what to do or not being able to define a plan of action leads us to a state of anguish and dissatisfaction , which if maintained over time or becomes habitual and widespread in different situations can lead to a feeling of impotence and lack of control over one’s life.

In addition to the above, among the different causes that can generate tiredness and lack of desire is the fact of living traumatic situations. In this case we could be talking about a typical situation that occurs during a period of mourning , for example when we lose a loved one or when we perceive that we are losing our capacities.

They are also symptoms that can appear in post-traumatic stress disorders, although hypervigilance, tension and re-experimentation usually prevail.

We are faced with a great number of social demands on a daily basis. We must be effective and efficient in our work, proactive, competitive…

All this can lead to situations of great stress and anguish , which, if maintained over time, can end up saturating the person and triggering a loss of motivation and great physical and mental fatigue.

In addition to all of the above, another reason that tiredness and apathy may arise can be linked to problems such as depression.

In fact, some of the possible symptoms are precisely the fatigue/feeling of tiredness or apathy, in addition to other more characteristic but can also cause these feelings such as sadness or loss of ability to feel satisfaction and pleasure with what we liked before.

How to relieve this feeling?

We have seen some common causes for tiredness and lack of desire to act. But beyond what has generated it, what probably many of those who ask themselves this question want to know is how to solve it .

It is not the same to have these symptoms because of having a pulmonary emphysema as because of the death of a relative or because of suffering from depression. To help with this identification, it is necessary to assess whether something has happened now or in the past that affects us emotionally (or something that reminds us of a previous misfortune or problem). It may also be necessary to carry out blood tests or other medical checks (especially in vulnerable populations), as this may be a symptom of some illness.

Knowing the duration of this state is also useful: if it is sporadic or if it is something continuous over time. Usually the more continuity there is, the greater the need to seek help or a solution.

As possible ways of solving this feeling at a general level, it is advisable to establish or normalize the periods of sleep and maintain a balanced intake according to the needs of our body . The search for pleasant and enjoyable activities and the formulation of realistic and not excessively demanding schedules is also a useful method. Writing down thoughts can also help us to alleviate discomfort while giving us clues to its possible causes.

Another alternative is the practice of relaxation techniques, especially if it is something derived from stress. Meditation or mindfulness can also be helpful. Finally, we should make an evaluation of our beliefs and self-demands regarding what we should do, be or achieve, and if necessary modify them for other more adaptive and realistic ones. In this sense it may be necessary to seek professional psychological help.