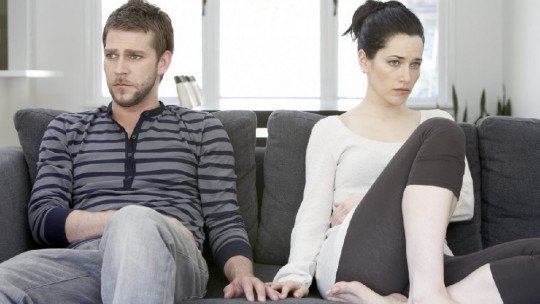 The experience of marriage and living a relationship should be something beneficial, enriching and satisfying for both partners. However, there are many cases where the dynamics of the couple are very different, and yet they are reluctant to break the bond.

Although it is true that there are many reasons why people feel dissatisfied or unhappy in their relationship , there are many other reasons why they prefer to continue. Nevertheless, couple psychology still struggles to clarify why some unhappy couples are able to break up, while others are not.

The Theory of Interdependence

One of the most accepted theories that try to explain this phenomenon is the Theory of Interdependence. Explained by psychologists Harold Kelley and John Thibault , this assumption establishes that each of the members of the couple evaluates personal satisfaction with their marriage or bond, in relation to the costs and benefits of said relationship.

That is, if our partner demands a lot of time and resources but compensates us because he covers our needs, or if, on the contrary, he gives us little but also demands little, it is very possible that we will maintain the relationship.

The key to this theory is that as long as the perceived costs do not outweigh the benefits, there is a good chance that the couple will stay together. Otherwise it is very likely that one of the two will end up cutting off the relationship .

Thus, according to the Interdependency Theory this equilibrium is the basis of the compromise . To be more specific, according to Kelley and Thibaut, in spite of the dissatisfaction in the couple, the people who make up the couple will feel more committed for these reasons:

Although the conclusions of the studies of Kellet and Thibault on the Theory of Interdependence can be applied to the present, it is certain that they are approximately fifty years old, and that** the dynamics of couples change just as society changes**.

It is obvious to think that the level of satisfaction a person has in his or her relationship depends largely on what this relationship brings to him or her. That is, on the benefits. However, recent research points to the role of individual standards or, in other words, the idea or conception that each person has about what a relationship should be. According to these studies, it is very possible that a couple in a dysfunctional relationship maintains this bond simply because their standards for couple relationships are low .

The cases in which people are really dissatisfied with their relationship but maintain their commitment, are difficult to explain by the Interdependency Theory. However, the studies carried out by the psychologist Levi Baker, at the University of North Carolina, provide other lights that can help us to understand why many unhappy couples continue to be together .

Therefore, when it comes to making a prediction about whether or not an unhappy couple will keep their relationship together, the expectation of future satisfaction will be a better predictor than the current satisfaction in the couple.

Although there are probably many more factors, the hypothesis that the expectations of happiness in an unsatisfactory relationship are not entirely unreasonable, since after all, these are long-term relationships and it is logical to think that the good will outweigh the bad in the long term.

The influence of personal and social factors

Although the studies show clear trends, as we mentioned at the beginning of the article, there are a variety of factors that influence the decision to break up a relationship in which we are not happy.

Personal factors such as beliefs about the importance of marriage and personal relationships play a fundamental role. For some people, being single is an unacceptable condition, much worse than living in a relationship where there is no longer love.

The importance that society has placed on marriage or life as a couple as an ideal state exerts a powerful influence on people, some of whom are desperately looking for a partner with whom they can share their life regardless of whether it makes them happy or not.

In other cases, the factor that keeps couples together is the existence of children . Developing couple dynamics in which each of the components maintains parallel lives but keeps the same home, remaining together for the supposed good of the children. Because, in their belief, the division of the household is much worse for the children than the current situation.

A different issue is that involving religious attitudes and beliefs around divorce . Those people with a strong relationship with their religion may refuse to face a divorce either out of their own conviction or out of fear of being rejected in their religious community.

Whatever the reason for the dissatisfaction, once people are aware of their partner’s condition they move on to assess their future prospects or options . If this person perceives that he or she has opportunities to find something better, it is very likely that he or she will break off the relationship, looking for a new beginning.

With this in mind, it is easy to understand why younger couples perceive separation or divorce as much more plausible than older couples.

In cases where they are unable to imagine a better alternative to the current condition of the couple, it is quite possible that they will maintain it; by finding ways to ease the conflicts and considering each other as life partners.