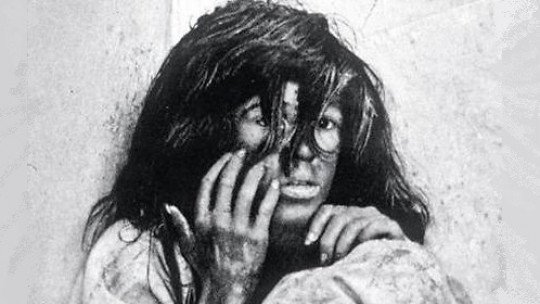 “The young man was found lost, in a wild state and full of scars from animal bites. He seemed to be immune to heat and cold, tearing the clothes that people tried to put on him and refusing to eat cooked food, consuming only raw food”.

This description may be reminiscent of some fictional characters such as Tarzan or Mowgli from the Jungle Book .

However, on this occasion, they refer to Victor de Aveyron , one of the best known cases of “wild child”. This young man was found by hunters at the end of 1799 in a forest in the city of Aveyron, with the characteristics described above. He also has a large scar on his neck, probably made with a knife or sharp object, which suggests that they may have tried to kill him.

The case of Victor de Aveyron

The boy in question had been seen on multiple occasions climbing trees , running on all fours, drinking from streams and eating acorns and roots, until he was finally caught when during the winter he approached farms in search of food.

The doctors of the time thought that the boy was mentally retarded because he did not understand or respond to language. Victor would be adopted by a teacher named Itard , who considered that the infant only had a deficit in language development due to the long period the child was supposed to have survived in solitude.

While a woman named Mrs. Guerin would take care of the child, Itard would try to educate and reintroduce the little wild child into society, trying to teach him language, moral behavior and social norms.

However, in spite of devoting many years to this task and the importance of Itard’s work (his methods being taken into account a posteriori by educational methodologies such as Montesori), no great success was achieved, and the attempt at education was abandoned and the child was left under the guardianship of Mrs. Guerin. Victor would die at the age of forty, still under her care.

What is a wild child?

Victor and many others like him are considered to be wild children; those infants who have been isolated from society for a prolonged period of time from their childhood and/or adolescence, either because they were abandoned in a wild environment, lost, or retained or confined during childhood or puberty, fall into this category.

These children present serious alterations in both behavioural and cognitive aspects , as a result of the lack of acquisition of knowledge and skills that allow for coexistence and participation in the social life of a community.

It should be noted that there is some variability in the cases observed. Among the wild children we can find three basic types : children who have lived a long time in solitude (like the case of Victor de Aveyron), those who survived in a hostile environment being cared for by other animal species, and infants who have been mistreated and confined for a large part of their lives.

One of the most obvious symptoms is the absence or poor development of language . Although the different authors have disagreed on whether human language is a totally learned skill or whether the necessary structures for it already exist from birth, it has been shown that there are periods of learning in which there is an explosive development of some skills such as language. These periods are called the critical period .

In the case of language, experts have pointed out that the critical period is between three and four years of age . In this way, if the appropriate stimulation is not given in this phase, the child’s capacities will not develop correctly, weighing down his or her entire evolution and making it difficult to adapt correctly to the social environment. Not only would linguistic capacities be affected, but also representational, relational and even the very construction of personal identity.

In addition to the lack of language, another of the main deficiencies of these children and the one that explains most of the rest is the lack of socialization . Because through social interaction it is possible to learn and exchange information with others, it is possible to develop perspectives and ways of thinking and acting that enrich the personal repertoire and contribute to improving adaptation to the environment.

Because of their poor or no socialization, wild children are not able to participate in society, acting on what they have learned throughout their lives in the habitat they have grown up in. In other words, their attitudes and skills make them capable of surviving in the environment in which they have grown up, but they are not applicable to life in the community.

Another element common to most cases is the avoidance of human contact. Both physically and emotionally, these children try to get as far away from their peers as possible, which has made it difficult in the early stages to treat the cases.

This fact can be explained if we take into account that, apart from the fact that they have not had contact with human beings for a long time or that this contact has been aversive, these children have been removed against their will from the environment in which they have grown up , and even on the occasions when they have been adopted by animals they have been able to see their saviour die at the hands of humans.

Other known cases of wild children

In addition to the case of Victor, described above, there are a large number of examples. We will now examine the story of two more of them.

Amala and Makala, the wolf girls of India

On October 9, 1920, two frightened and dirty girls looked on in horror at an armed crowd gathered around them, being protected from the crowd by a she-wolf. The people around them, from the village of Godamuri (India), opened fire on the she-wolf, and had it not been for the intervention of a local reverend, Joseph Amrito Lal Singh, they would have killed the girls in the belief that they were spirits.

Both girls were trapped and taken with great resistance by them to an orphanage run by the reverend , where he and his family would try to re-educate them and reintroduce them into society.

The symptoms of isolation

From the very beginning the girls showed a high level of aggression towards humans, biting and scratching those who tried to approach them and allowing only their own mutual company and that of the local dogs. They tore off their clothes and showed difficulty in standing upright. Both girls walked on all fours , apparently without perceiving cold or heat. Their interaction with others was limited to grunts, which made socialization very difficult to achieve. They both hated cooked food, eating only raw meat on the floor of the yard.

Like the wolves that had cared for them, both girls tended to sleep during the day and make a living at night. It was common to hear them howling during the night and they seemed to have a slightly more developed sense of smell and night vision than usual.

Unfortunately, one year after she entered the orphanage, three-year-old Amala would die of dysentery. Her sister had to be forcibly separated from the remains, and she reacted with tears and great sadness. Over time, Kamala would begin to make small advances in socialization and language acquisition, acquiring about 30 words, and beginning to walk upright. Eventually she was able to communicate with the reverend and his family through monosyllabic words , until finally the little girl died of typhus at the age of 15.

Like Victor de Aveyron, the case of Genie is one of the best known cases of “wild child”, this time located in the state of California. The girl in question, born in the 1950s with severe health problems (incompatible HR, congenital hip dislocation and possible intellectual disability), was locked up by her father in a small room and grew up tied to a chair during the day and caged at night from the age of twenty months to thirteen years, on a forced diet based on baby food and other similar abuse.

As with Victor de Aveyron and the sisters Amala and Kamala, Genie was treated by a group of doctors, linguists and psychologists in order to re-educate her and integrate her into society. Genie’s case is the wild child that has shown the most evolution, being this young woman capable of creating sentences and relating words, although with an incorrect sentence structure.

Although the intervention had some success, the Mental Health Association in the United States considered that progress was not sufficient and finally decided to suspend the budget for the child, who would end up in different adoptive families. Unfortunately, in some of them she also suffered mistreatment, for which she regressed to her previous state and stopped speaking again.

Currently Genie lives in an adult care facility , without further information about it due to ethical considerations about her privacy.

Brain plasticity and the critical period

Childhood is a stage of life in which we are particularly sensitive to change, to the marks left on us by the environment. This means, among other things, that during the first years of our lives we have a unique ability to learn and to detect patterns in all those experiences that occur to us. This is very well reflected in the way we begin to learn and internalize a language, for example; a technically very complicated task that, nevertheless, we master with amazing speed as children.

However, this learning ability, linked to a neurological phenomenon known as brain plasticity, is double-edged. Just as in our childhood we are very sensitive to what happens to us, we are also sensitive to what does not happen to us. Specifically, the fact that we have not learned to master language and to socialize with other human beings who have mastered it means that, when we reach an age threshold, the so-called critical period, we become incapable of learning to use language.

At that moment our brain ceases to have the capacity to modify itself in such a profound way as to interiorize such complex learning.Furthermore, this affects all our cognitive abilities, since in a way language influences the way we think. In the case of wild children, this is clear.

The circumstances surrounding these cases have been the focus of numerous investigations to find out whether someone growing up in isolation could shed light on the effect of education and the influence of society, or whether characteristics such as language are innate or acquired by being explored in multiple facets of these children’s lives.

In any case, it is essential to always take into account the ethical considerations of the exhaustive investigation of this phenomenon, since they can be very harmful to children and their integrity.