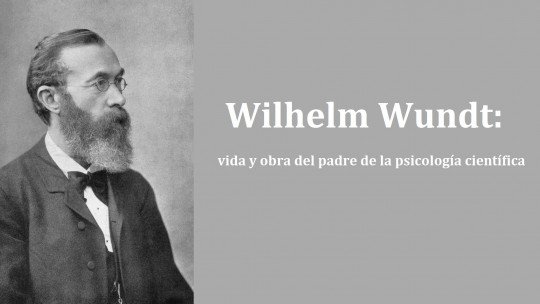 In the history of psychology there are few figures as relevant as Wilhelm Wundt .

In the middle of the 19th century, this researcher brought scientific psychology to life and was one of the first to face the practical and epistemological problems of studying mental processes with the intention of extracting knowledge that could be generalized to many people. In this article I have set out to make a brief review of his role as the initiator of a science that until not so long ago was one of the many facets of philosophy.

I know many people who, when they have set out to study psychology on their own as part of a hobby, start by reading books by classical philosophers such as Plato or Aristotle.

I do not know exactly why they start with this kind of reading, although I can imagine it: they are well known authors, their books are easily accessible (although difficult to interpret) and, moreover, they represent the first attempts to systematically examine the functioning of the human mind.

However, the works of these philosophers do not deal fundamentally with psychology (as much as the word psychology has its etymological roots in the origins of Western philosophy) and, in fact, neither do they tell us anything about the methodologies used today in research on behavior. The origin of behavioral science is relatively recent: it took place at the end of the 19th century and was led by Wilhelm Wundt.

Psychology seems to have been part of our existence for a long time now; basically, since we started asking ourselves questions about how we think and how we perceive reality, millennia ago. However, this is only half the truth. Neither is psychology simply the formulation of questions about behavior and mental processes, nor has it existed independently of the development of our history.

That is why, although in certain aspects it can be said that philosophers like Plato and Aristotle laid the foundations of psychology,
the one in charge of making this science emerge as an independent discipline was Wilhelm Wundt , a German researcher who, besides being a philosopher, invested a lot of effort in making mental processes prone to be studied through the experimental method, something that had not been done in previous centuries. This is the reason why, by general consensus, psychology is considered to have been born in 1879, the year in which Wundt opened the first laboratory of experimental psychology in history in Leipzig.

The New Research of the Mind

Until the 19th century, the task of many philosophers had been to create theories about the workings of the human mind based on speculation. Authors such as
David Hume or René Descartes talked about the nature of ideas and the way we perceive our environment, but they did not build their theories on experimentation and measurement. In the end, their job was to examine ideas and concepts rather than to explain in detail what the human body looks like. Descartes, for example, spoke about innate ideas not because he had concluded that they exist from controlled experiments, but from reflection.

However, in Wundt’s time the development of the
The study of the brain and advances in statistics helped to lay the foundations for the study of behaviour and sensation using measurement instruments. Francis Galton , for example, developed the first tests to measure intelligence, and around 1850 Gustav Fechner began to study the way in which physical stimulation produces sensations according to their intensity and the way in which our senses are stimulated.

Wundt took the scientific study of the mind further by attempting to generate theories about the global functioning of consciousness based on experimentation. If Galton had intended to describe psychological differences between people to find statistical trends and Fechner had used laboratory tests to study sensation (a very basic level of consciousness),
Wundt wanted to combine statistics and the experimental method to generate a picture of the deepest mechanisms of the mind . That is why he decided to stop teaching physiology at the University of Heidelberg and to investigate the more abstract mental processes in Leipzig.

How did Wundt investigate?

Many of Wilhelm Wundt’s experiments were based on the methodology used by Gustav Fechner when studying perception and sensation. For example, for a short time a person was shown a pattern of lights and asked to say what he was experiencing. Wundt
took a lot of trouble to make it possible to compare cases with each other : the time that a stimulus should last was strictly controlled, as well as its intensity and its form, and the situation of all the volunteers who were used should also be controlled so that the results obtained are not contaminated by external factors such as position, noise from the street, etc.

Wundt believed that from these controlled observations in which variables are manipulated, an image could be “sculpted” about the basic secret mechanisms of the mind. What he wanted was, fundamentally, to discover the simplest pieces that explain the functioning of consciousness to see how each one works and how they interact with each other, in the same way that a chemist can study a molecule by examining the atoms that form it.

However, he was also interested in more complex processes, such as selective attention. Wundt believed that the way in which we attend to certain stimuli and not others is guided by our interest and our motivations; unlike what happens in the rest of living beings, said Wundt,
our will has a very important role in directing the mental processes towards goals decided by our own criteria . This led him to defend a conception of the human mind called voluntarism .

Today Wundt’s theories have been discarded, among other things, because
this researcher relied too much on the introspective method , that is, on obtaining results according to the way people talk about what they feel and experience. As we know today, although each individual has a privileged knowledge about what goes on in his or her head, this knowledge is almost never valid and is the product of a great deal of perceptive and cognitive biases and limitations; our organism is made in a way that objectively knowing what the psychobiological processes operating in its back yard are like is much less of a priority than surviving without being too distracted.

That is why, among other things, current Cognitive Psychology takes into account those unconscious mental processes that, despite being different from those theorized by Sigmund Freud, powerfully influence our way of thinking and feeling without us realizing it and without us having the possibility of guessing their causes by ourselves.

However, despite the logical limitations of Wilhelm Wundt’s work (or perhaps because of them), the entire community of today’s psychology is indebted to this pioneer for being the first to systematically use the experimental method in a laboratory dedicated exclusively to psychology.