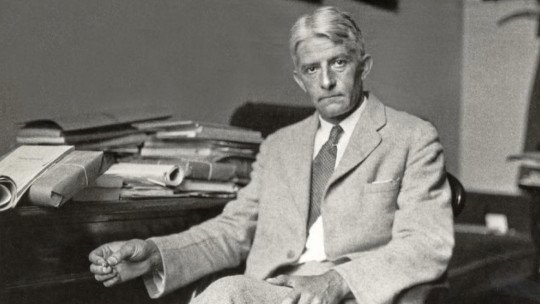 Research on how humans learn and are able to understand the world has led many researchers to develop different models and theories. Not only in the human being, but we also find great interest in understanding the animal capacity to adapt to the environment and solve the problems they encounter.

In this sense, a great number of analyses and comparative experiments with different species have been carried out throughout history, one of the closest to human beings being that of chimpanzees.

One of the most important and renowned researchers in this area, who became one of the main pillars of the Gestalt school, describing learning by insight and who would even go so far as to lead the American Psychological Association was Wolfgang Köhler, whose biography you can find summarized below .

Wolfgang Köhler was born on 21 January 1887 in the port city of Reval (today known as Tallinn), in an Estonia that was then part of the Russian Empire. His family was of German origin, his parents being Franz Köhler and Wilhelmine Girgensohn (school principal and housewife, respectively) and having a brother and several sisters.

Köhler would live his first years in Estonia but when he was six years old he moved with his family to his parents’ home country, Germany, settling in the town of Wolfenbüttel. As his father was the headmaster of a school, education was very important in his family, and at the Köhler school he would begin to discover a great interest in science, fieldwork and classical music .

At the latter university he studied subjects such as biology, physics and chemistry, and was influenced by such important figures as Planck and Nernst in the field of physics , and met and studied with his thesis tutor, Carl Stumpf. He received his doctorate in psychology from this university in 1909 with the dissertation “Akustische Untersuchungen”, a thesis on psychoacoustics.

Shortly after obtaining his doctorate, in 1910, Köhler entered the Psychological Institute in Frankfurt , where he first worked as an assistant and later became a professor. He would work with Wertheimer and Kofka in different experiments linked to perception, a work that would converge in the creation of the well-known Gestalt school, which focused on the study of forms and considered that the whole was more than the sum of its parts.

In October 1912 he married the artist Thekla Achenbach, and a year later he was recommended and hired as director of the Prusiona Academy of Sciences of Tenerife, in the so-called Casa Amarilla. There, Köhler would carry out different investigations with chimpanzees , analyzing their cognitive abilities and discovering what would be called learning by insight. From this he would write works such as The Mentality of Apes , developing different theories regarding learning and the existence of intelligence in non-human apes.

During the stay of Köhler and his family on Tenerife different events took place, among them the First World War. Although initially Köhler wanted to participate in the military service of his country , this was not possible due to the impossibility of navigating in British controlled waters. He would remain on the island during the war.

However, there are theories and different suspicions about the possibility that Köhler acted as a spy for his government regarding the activity of the British on the island. These suspicions ended up provoking protests from the British consulate, which would eventually get the Yellow House activity moved elsewhere. After that, Köhler returned to Germany in 1920 .

Back in his home country, Köhler was hired at the Institute of Psychology at the University of Berlin, where he was appointed director in 1921. He divorced his first wife and remarried Lily Harleman in 1927.

He would also work as a philosophy professor and participate directly in research on Gestalt theory , getting back in touch with Koffka and Wertheimer. During these investigations he would come to analyze and criticize introspection due to its subjectivity and would look for the use of more empirical and objective methodologies.

However, it would not be conducive to behaviourism either because it relies only on directly observable behaviour and avoids covert behaviour. He would also travel and work in the United States, alongside William James and at Harvard and Chicago universities, although he would return to his homeland.

The arrival of the Nazis and emigration to the United States

The arrival of the Nazis in power was another turning point in Köhler’s life. Although he initially did not show his opposition to the regime in an open manner, he would eventually publish a critique of it (in fact, it is considered the last published critique of his regime in Germany until its fall) after Planck’s forced resignation and begin to act in a much more critical manner.

However, although he was apparently not arrested, the regime imposed more and more restrictions in the academic field and gradually lost more and more autonomy in the university, to the point that he had to resign and emigrate to the United States in 1935.

Once in North America, worked as a professor of psychology and research at Swarthmore College in Pennsylvania , where he would practice until his retirement in 1955. He would also carry out various investigations in Hanover, at Dartmouth College.

Köhler, because of his many contributions to psychology during his career, would be elected president of the American Psychological Association in 1959. Previously he had received an award from the same institution in 1956.

Wolfgang Köhler died on June 11, 1967. His death occurred at his home in Lebanon, New Hampshire.

The legacy of this important psychologist remains to this day and is part of many current theories. The concept of insight, for example, is still present , as well as his important participation in the gestalt school.

Furthermore, the analysis and study of the cognitive skills of primates allowed the development and reformulation of different theories of learning and the consideration of the cognitive skills of apes and other animals (including also chickens). Finally, it would also contribute to the investigation of cortical processes, in aspects such as visual or auditory perception.