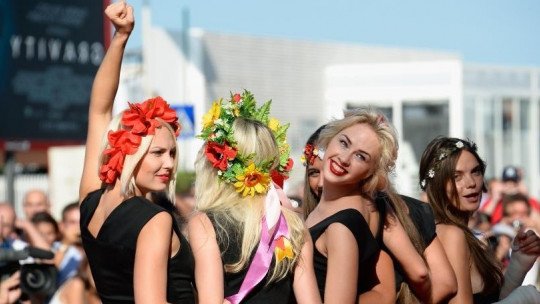 Femen is an activist and peaceful resistance group that leaves no one indifferent , not even a good part of the feminist groups, who often look at them with suspicion. There are also different theories about its foundation, some pointing out that it has served the United States of America as a weapon to destabilize the countries of the Middle East, and others attributing to it a role as a group financed by businessmen to harm the feminist struggle.

Although their public appearances are rare, they always turn out to be extremely media-friendly and manage to make international headlines. Their fields of action are usually congresses or political meetings, transnational economic entities or even the opening of women’s fashion companies, always with the same modus operandi: to attract attention.

Femen is defined as an international organization that fights sexism and religious impositions against women, in addition to considering itself “the special forces of feminism”, the movement’s militias, as quoted on its website. They make clear that they use the transgression of norms to claim themselves .

The context must be taken into account to understand the emergence of a group with radical slogans or actions justifying violence. Femen’s origin is Ukrainian, and although she seeks an internationalist sense, the main object of denunciation is the sexist abuses that occur in that country, as well as in neighbouring Russia. Most of her actions are acts of protest led by women naked from the waist up, with slogans painted on their bodies .

Numerous non-governmental organizations, human rights bodies and local journalists show that in these Eastern countries there is still a sexist line to the detriment of the female gender, both at the socio-family level and at the political-economic level. Let us recall the incidents of the feminist music group “Pussy Riot”, which was imprisoned and dissolved as a group for having broken into a church.

On the other hand, the members of the Women’s group are constantly exposed to potential police repression , as well as sentences that in some cases can reach two years in prison, since Ukrainian laws are significantly more severe than in the rest of Europe.

One of the main purposes of Femen is to reach where institutionalized feminism does not go directly: to charge strongly against religion . In 2014 they went directly to Pope Francis in Vatican Square, when the usual mass was being celebrated, to carry out one of his acts of protest.

As we have already commented, the modus operandi of Femen responds to that which the Suffragettes started in the 20th century with Emmeline Pankhurst: street violence and public uproar to attract the media. With a further addition that involves the naked torso and a clear intention to show the breasts with a message inscribed on them.

Why are they so rejected by feminism?

The most classic feminism, the well-known first and second wave feminisms , see with scepticism the use of the woman’s body as a showcase to achieve repercussion, even more when the activists in question are not very representative of the majority of women, being white, with little connection with religion and, in its first stages, close to the canons of beauty. Some associations and institutionalised organisations see this method as counterproductive, and denounce the re-exposure of women’s bodies to the service of media consumption.

Women are rejected, too, because of a major historical difference: Western feminism is almost a century ahead of them. Outside of Femen, the protests against sexism no longer focus on the questioning of religion as a simple fact “contaminating reason”, but rather an attempt is made to include in feminism groups that try to make non-machocentric readings of their own religiosity, which means a clash of interests in methodology.

Furthermore, these feminist institutions decline to support Femen openly because they consider it an ambiguous collective with little elaboration in its theories. This group of Ukrainian origin seems to position itself before a very ambiguous idea of sexism, while most feminist groups elaborate theories based on the concept of patriarchy. In this sense, Femen’s orientation seems to be closer to a liberal conception of gender problems, since it protests against the violation of forms of repression applied against women as individuals, not as a collective.